For me, the choice of text tools on the Mac has always been relatively uncomplicated. On my first Mac, a used Mac Plus, I used Microsoft Word, first Word 4, then Word 5.1,which remains my benchmark of comparison. Word 5.1 was a superb piece of software in the context of the time, and for my purposes at the time, which involved MacBook Pro lot more printing out formatted hard copy material than I’ve now done for years.

However, to say that Word 6, AKA Word for Windows For The Mac, was a disappointment would be understatement, and after a flirtation with Nisus Writer, which at the time was sort of a hybrid of word processor and text editor, I decided that text editors were a better solution to my text tool needs as they were evolving, and I switched to Tex Edit Plus, Tom Bender’s delightfully slick and nimble $15 styled text editor and cleaning app, and I never looked back. The “styled” part means that Tex Edit plus supports enough text formatting to make printed out copy look good (as well as inline graphics and even video) that for me a full-featured word processor became mostly superfluous, and on the rare occasion that I need full word processing power and file compatibility, Open Source Libre Office does a fine job as a MS Word surrogate.

And for pure plain text editing, I turned to bare Bones Software’s TextWrangler, which is a stripped-down version if their highly regarded industrial-grade text editor app BBEdit. Text Wrangler has been invaluable for weeding out non-ASCII characters and invisible but problematical formatting code that Web posting engines often choke on, and it really came into its own when I started synching files among my three production Macs and my iPad via Dropbox.

I’ve frequently mused that using an iPad for production tasking put me in mind of life on that primitive Mac Plus in certain respects, limited multitasking and text-crunching being two of them. The shortcomings of what passes for “multitasking” on the iPad is grist for another day, but most iPad text apps either require or work best with unformatted plain text, and some that I use frequently can’t open Tex Edit Plus documents, but are perfectly happy with text files saved in TextWrangler on the Mac. TextWrangler also happily adds the crucial .txt filenames suffix automatically when I create a new document.

On the iPad the picture is more complex, and I haven’t really found any do most single app that handles my requirements as comprehensively as Word 5.1 and Tex Edit Plus have over my years on the Mac. The good news is that there a gaggle of free or inexpensive text applications for the iPad, and even a few that can open and save Microsoft Word formatted files, although not necessarily with formatting. 100 percent intact.

iPad text apps I use regularly include, in no particular order, the generically-named PlainText; the equally to the point Just Type with its attractive, uncluttered and appearance customizable interface and virtually instantaneous saves to Dropbox — albeit only manual; recent addition to the suite iWriters from Japanese developer Yumi Itoh; an app named Compositions which is good for its eponymous purpose; a troika of “text processor” apps from Germany’s Infovole: the reasonably priced and powerful Textkraft, Textkraft ML, and Easy Writer which offer the deepest and most comprehensive text manipulation controls (including Forward D Delete and a case capitalization toggle button; and the idiosyncratic but interesting Scriptus — also with a nicely enhanced keyboard and autosave to Dropbox. They all have their respective strengths and shortcomings, but among them they keep most of the bases covered.

And that nowhere near exhausts the selection of iPad text apps, and includes just the ones that currently suit me best. I would of course be delighted if Tom Bender one day gets around to porting Text Edit Plus to the iOS, but for now things are pretty good — definitely a lot better than when I started using an iPad just shy of three years ago.

I wouldn’t want to get along without any of the iOS text apps listed above, but a couple of them in particular stand out as reasonably good jack of all trades tools.

PlainText quickly became my most-used text app early on, but it hit a rough patch with the upgrade to iOS 7 last fall. Its then developer Hog Bay Software released an iOS 7 upgrade of PlainText, I didn’t much like the changed appearance, but what really kneecapped the iOS 7 app was now that it took up to two minutes for the app to open or reopen from the background, and the page to refresh — partly due, one presumes, to OS 7 being more demanding of the poor old ‘iPad 2’s puny memory capacity than iOS 6 had been. It was exasperating waiting out the refresh lags, especially when switching back and forth when working with another app using the iOS’s lame app switching that Apple has the audacity to call “multitasking” is bad enough at the best of times, but this was ridiculous.

However, the app has been acquired by Jonathan Jordan’s 433 Labs, who appeal to users to be patient while they “make PlainText great again.” A version 2 release and an incremental upgrade or two have made PlainText usable again. It’s not back to the kind of smooth, polished, quick-responding performance it had with iOS 6, but the page refresh has been reduced to a few seconds, which is a a huge improvement, and good stuff like its automatic saving of changes to Dropbox and ease of creating new documents remain. There’s also a new keyboard with an extra row at the top displaying dedicated keys for commonly-used punctuation marks and such, plus a couple of new keys at the ends for moving the cursor. A nice, incremental productivity tweak, although I still wish a quick access n-dash had been included, along with a case change toggle button. There’s handy word count function, and you can configure the slide-out document selection window to sort and display either by date modified or alphabetically, although I would love it if there was a toggle button to shift the sort order without having to visit the settings preferences

There is also a rudimentary search function of filenames in the local folder, but PlainText (and other iOS apps) still lacks a decent and speedy global search engine, OS X Spotlight being a feature I really miss using the iPad.

There is still a bit of hesitation and lag in interface performance, but it’s now tolerable, and the app is still exceedingly useful.

Then there’s iWriters — a new iOS text editor app from Yumiko Itoh, the delightfully cheerful developer of the Mac OS text editor lapps LightWayText and iText, which have been around for a couple of decades. iWriters supports iPhone, iPod touch, and iPad, and features both Dropbox and Evernote linking.

And it’s a smooth and elegant performer on the iPad 2. Mr Itoh, who prefers ‘Yumi,’ notes that: “With iWriters, you have all the power you expect from a http://www.jp-lightway.com/appstore/iWriters/en/#1.1. full-featured multipurpose text editing program; writing and editing several text documents at a time, saving each file hierarchically in your memory, exchanging files between iPhone devices and a Mac, PC, or other devices including Windows Mobile, BlackBerry, and Android. You can email an editing text instantly. iWriters also allows you to use the Dropbox or the Evernote directly online, and supports TextExpander touch snippet expansion.”

iWriters’ user interface is, as I noted, elegant, and can be customized to suit your taste in text and background colors, fonts and point sizes, and so forth. I will mildly criticize it for finding and using its array of settings and function controls being a bit of a scavenger hunt, and not especially intuitive in an app that comes with little in-app documentation, but I found everything within a few minutes of experimentation, and to be fair, the iWriters User Guide is available online at:
http://www.jp-lightway.com/appstore/iWriters/en/ 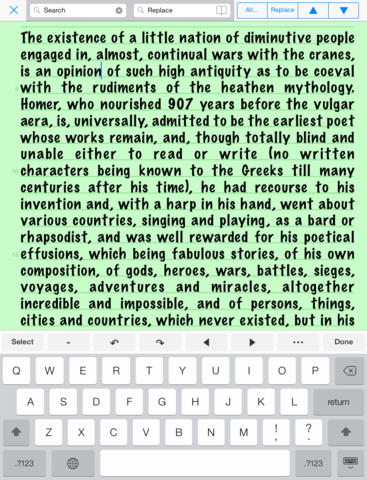 And did I mention that it’s free (ad-supported)? The ads appear in a ribbon at the bottom of the UI window, and are only visible when the keyboard isn’t. Speaking of the keyboard, it’s a significant enhancement of the iOS default ‘board with a row of special keys at the top with Select, n-dash, undo/redo, navigation arrow, date and time keys normally visible, and background keys for case/capitalization (hooray for that last one especially!).

Open apps can be switched between or among via a tab bar at the top which can either remain visible or be set to appear upon touching the title bar.

You do have to remember to save newly created documents manually, but there’s autosave with adjustable intervals and documents are sorted only alphabetically. 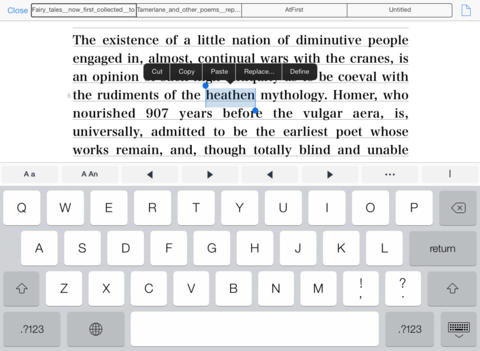 * Create, open, edit, and modify multiple text documents in parallel, and save each one hierarchically in your memory.

* Writing and editing are natural – using just your fingers, and the standard onscreen keyboard and spell checker, and autocapitalize sentences help you write. Buttons like a keyboard’s arrow keys do come in mighty handy to move an editing cursor to the left and the right.

* Capable of both landscape and portrait.

* Send any currently open text, or part of this text directly from iWriters via email.

* Save, open, and sync files onto/from/with the Dropbox Server and the Evernote directly in iWriters.

* You can sync iWriters text files to a Mac or PC manually in iTunes.

* The left edge of the screen is useful. Jump to a particular line by tapping, or scroll up or down very quickly by dragging.

* With a few taps, change the selection to uppercase, lower case, or capitalize, or also change it to double width or the normal width.

* Search & Replace. Search the current text or all files for any word or phrase including diacritic letters. You can search for a text with the Regular Expression as well.

* A variety of text settings. Select which best suits your editing – the text style, including the font, size, color, adjustment, margins, etc. 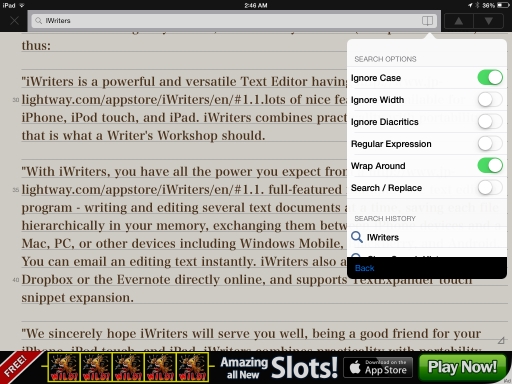 * Keep the file-compatibility while exchanging files between a Mac, PC, or other devices. You can save all the files remaining their character encodings and New Line codes as you opened each file.

* Choose any you want from LF, CRLF, or CR to the return code, and from ASCII, UTF-8, Western (Windows-1252), or Western (Mac OS Roman) to the character encoding.

* Browse the statistics for the whole text or the current selection, including the number of characters, words, paragraphs, and indicate the line numbers. 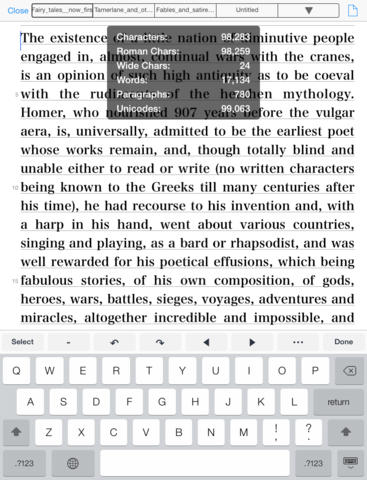 * Change the overall look of iWriters by choosing appearance options, including the background color, ruled line, and Navigation bar.