I was an iPad skeptic back in 2012 when Steve Jobs sprung it on the unsuspecting world. At the time, Windows PC netbooks were riding high in consumer markets and full-sized laptops ruled as the most popular personal computing platform for mid to higher end users in content creation and the enterprise.

As a longtime, thoroughgoing laptop aficionado, that suited me just fine, or so I thought, so I was more than a little dismayed by Mr. Jobs’s declaration that we’d entered a “post-PC era. Nobody had asked me, but prognostications emerged from the proverbial woodwork in various quarters contending that tablets would replace the laptop for a majority of users..

And for a while, it looked like they would. The iPad was an instant hit, quickly soaring to become Apple’s second biggest money making product after the iPhone, and was soon followed by a gaggle of imitators powered by Google’s free Android OS, and more recently the touchscreen versions of Windows 8 and 8.1. Meanwhile laptop sales stagnated and eventually began to shrink as consumers increasingly switched to tablets.

Fifteen months after the iPad’s momentous debut, I bought the iPad 2 I’m typing this column on right now. At the time, I was still doubtful that I’d find much use for it, but I needn’t have worried. Pretty soon I was spending half or more of my screen time on the iPad, and I find it hard to imagine how I ever got along without it.

Even better, the iPad 2 has been as dependable as the proverbial anvil, now well into its fourth year of service with zero problems to report. With its outstanding levels of workmanship, finish and design, it’s a pleasure to use, touch, hold, or just look at. I’m planning to upgrade to a new iPad this fall after the sixth-generation units land, but the old iPad 2 has given me little incentive to move on.

However, another shift appears to be underway. After Apple released the iPad Air and iPad mini with Retina Display last fall, they enjoyed a quarter of robust sales growth, followed by back-to-back quarters logging negative growth. And while iPad’s reversal of fortunes has been especially sharp, Taiwan-based market intelligence firm TrendForce reported last week that in 2014, the tablet computer’s novelty seems to have worn off generally, prices for various Android machines have bottomed out, and low-priced notebooks are clawing back portable computing market share from the tablet sector. An exception are some Windows tablets, including Microsoft’s own Surface Pro, which finally made some money after a long slow start, and Lenovo’s Intel Atom powered ThinkPad 10, which, as we noted here last week, contributed strongly to contributed to a 67 percent year-over-year tablet sales gain for Lenovo while iPad and Android tablet sales have been slumping.

As a result, branded tablets will experience negative growth for the first time this year, observes TrendForce notebook PC analyst Caroline Chen, who expects 153 million brand-name tablets will be shipped in 2014, for a year-over-year decrease of 1.8 percent, while notebook shipments, on the other hand, will increase 1% on year to 171 million according to her projections.

Ms. Chen observes that with the tablet supply chain mature and shipments growing, the retail price of tablets has fallen sharply, and as a result, among all producers besides Apple, there will be a long-term price war in the tablet market, which is one major difference between now and 2010 when the iPad was the least expensive tablet computer on the market. Ms. Chen doesn’t specifically mention the Surface Pro, which is also expensive, but more realistically considered a tablet-sized Ultrabook laptop with tablet touchscreen capabilities, and more a competitor to Apple’s MacBook Air than it is to the iPad. Ms. Chen says Apple will merely release a revised and upgraded version of its iPad Air in the fall, while Samsung, another major player in the market, is only equipping high-end tablets under its own brand with its OLED screens, providing more indication that the tablet market is flagging, noting that TrendForce data back up that assertion, showing that while tablet shipments will grow in the second half of the year, the main reason that increase appears substantial is that shipments in the first half have been so low.

Meanwhile, because of rising demand for tablet PCs and a rapid decline in the retail price of notebooks, the market for netbooks has almost (?) vanished (does anyone still make a netbook?), but demand for notebook PCs has started to rebound. “Time has shown that notebooks are irreplaceable,” says Ms. Chen — an affirmation with which I enthusiastically agree. “They offer larger screens than tablets as well as a keyboard and mouse, which are all important for those who use their computers primarily for work reasons she continues, “Tablets remain limited to Internet browsing and entertainment functions.”

I do beg to differ on that last contention. I do quite a bit of real work on my iPad — more and more all the time as availability and features of available productivity software improve, and I expect that to continue and increase when I get a more powerful iPad. That said, I’ve never even casually entertained the notion that it is or ever will be a zero-sum tablet-notebook saw-off for me. I find it hard to imagine that I’ll be giving up my MacBook Air in the near to mid to near term future. It is, as Ms. Chen observed, “irreplaceable.” And even Apple CEO Tim Cook, who said earlier this year that he does 80 percent of his work on his iPad, presumably does the other 20 percent on a Mac.

TrendForce attributes a projected increase in notebook shipments in the second half of 2014 to several factors. First, with the tablet market in the doldrums, laptops face fewer competitive threats. Second, demand for notebooks in the commercial market remains. Finally, notebooks are priced very competitively. Even MacBooks when you compare specs, power, and versatility of an entry level 11-inch MacBook Air, which sells for only a few dollars more than a to-of-the-line iPad.

The analysts maintain that all of these factors will contribute to a boost in notebook demand, giving brand-name manufacturers such as Hewlett-Packard (HP), Lenovo and others room to grow that side of their businesses. As such, TrendForce estimates the global notebook PC market has the potential to expand 4-7% in the second half of the year, making 2014 the year when slowing notebook demand may finally reverse. 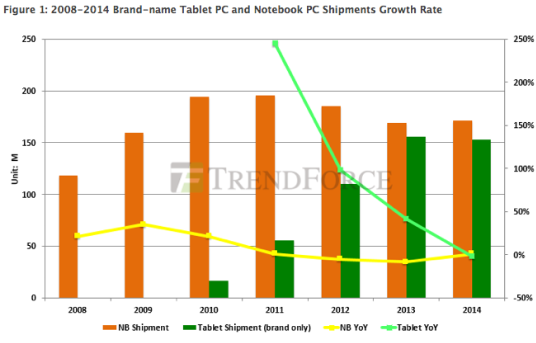 Personally, I’m keeping feet in both camps. I bought the MacBook Air last November, and my older Core 2 Duo MacBook and a couple of ancient PowerBooks still get plenty of use. However, I fugure I’m overdue for a more powerful iPad with a Retina display, more RAM, a better camera, and more processing power. I had pretty much determined that it will be an iPad Air when the latest tranche of 13-inch iPad Pro rumors ramped up. High on my wishlist for enhanced iPad productivity is multi-windowed multitasking. Earlier this year that feature was rumored to be coming with iOS 8, which reportedly contains code that could enable split-screen multitasking, but supporting only the iPad Air, thus ruling out an iPad mini. However, Motley Fool U.K.’s Evan Niu suggested last week that Apple might reserve the split-screen multitasking feature to the 12.9-inch iPad Pro as a “killer feature” to attract enterprise users.

Niu notes that testing Samsung’s 12.2-inch Galaxy Tab Pro tablets at CES 2014 his skepticsm about about such large tablet form factors was heightened. However, he observes that an important distinction is that any tablet that large is not positioned as primarily a consumer offering, but that large tablets do offer much more potential in the enterprise, which is exactly what Apple will be shooting for in its project of making the iPAd professional grade.

Toward that end, making split-screen multitasking an iPad Pro exclusive would be a smart market strategy, but if that turned out to be the case, it would present me with a conundrum. My iPad 2 is great, but I’m finding its measly 512 MB of RAM is routinely being overtaxed by stuff I do with it, and the 2 megapixel camera is only better than no camera at all. I’ve held out this long, but don’t think I’ll be able to resist upgrading until into the new year when the 12.9-inch iPad Pro is most likely to be released.

One strategy would be to buy an A7 iPad mini now to tide me over, and then sell the mini and move up when and if split-screen multitasking becomes a reality on one or both larger iPad models. That seems an untidy but not impossible solution.