The American Automobile Association deduces that with three out of four drivers buying into the popular misconception that hands-free technology is safe to use behind the wheel, it will come as a surprise to many to learn that these popular new in-car technologies may actually increase mental distraction, according to new research by the AAA Foundation for Traffic Safety. 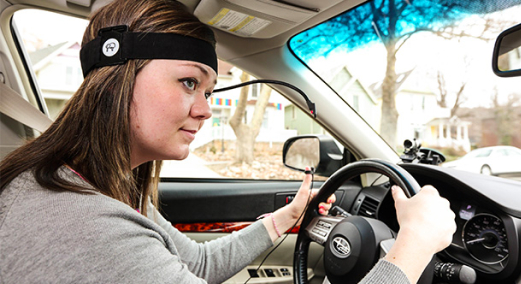 Statistically, talking on a phone while driving — handheld or hands-free — increases crash risk by the same fourfold factor, according to The Insurance Institute for Highway Safety (IIHS). The rationalization that talking on a hands-free phone should be no different than talking to a passenger inside the automobile seams reasonable, but it doesn’t hold up to scientific scrutiny.

A study from the University of Utah at Salt Lake City found talking on a cellphone while driving significantly more dangerous than chatting with passengers — possibly because drivers feel more comfortable pausing a conversation with a passenger when road conditions warrant than pausing a phone conversation, since persons in the vehicle will understand why pauses are occurring, while someone at the other end of a telephone conversation has no sense of what’s happening in the car and on the road around it is unable to react or just shut up immediately should a dangerous set of circumstances develop.

This study builds upon groundbreaking research conducted last year, which found that drivers can be dangerously distracted even if their eyes are on the road and their hands are on the wheel. AAA promoted the study in the release: Think You Know All About Distracted Driving? Think Again, Says AAA.

A study cited by The Coalition for Cell Phone Free Driving says statistical likelihood of being involved in a motor vehicle accident while talking on a cellphone greater than with low-level alcohol impairment, slowing a driver’s reaction time by 18 percent. Research by the University of North Carolina at Chapel Hill found that cellphone use increases risk of rear-end collisions twofold. However this new research can serve as guidance to manufacturers who increasingly market hands-free systems as safety features, and the good news for consumers is that it is possible to design hands-free technologies that are less cognitively distracting, according to the research.

With a predicted five-fold increase in infotainment systems in new vehicles by 2018, AAA is calling for action to address a looming public safety crisis ahead with the future proliferation of these in-vehicle technologies as result of this research. The AAA’s latest study results, which build on the first phase of the Foundation’s research conducted last year, suggest that developers can improve the safety of their products by making them less complicated, more accurate and generally easier to use — a point the AAA hopes to use in working with manufacturers to make hands-free technologies as safe as possible for consumers. While manufacturers continue their efforts to develop and refine systems that reduce distractions, AAA encourages drivers to minimize cognitive distraction by limiting the use of most voice-based technologies.

“We already know that drivers can miss stop signs, pedestrians and other cars while using voice technologies because their minds are not fully focused on the road ahead,” says Bob Darbelnet, chief executive officer of AAA. “We now understand that current shortcomings in these products, intended as safety features, may unintentionally cause greater levels of cognitive distraction.”

Using instrumented test vehicles, heart-rate monitors and other equipment designed to measure reaction times, Dr. David Strayer and researchers from the University of Utah evaluated and ranked common voice-activated interactions based on the level of cognitive distraction generated. The team used a five-category rating system, which they created in 2013, similar to that used for hurricanes.

Participants in this research completed a series of voice-based music functions and phone dialing tasks while driving an on-road course. Each participant drove six vehicles on a seven – nine minute loop through a residential neighborhood in which they were periodically instructed to dial a 10 digit number, call a contact, change the radio station, or play a CD. All interactions took place using “hands-free” voice systems which were activated with the touch of a button on the steering wheel. 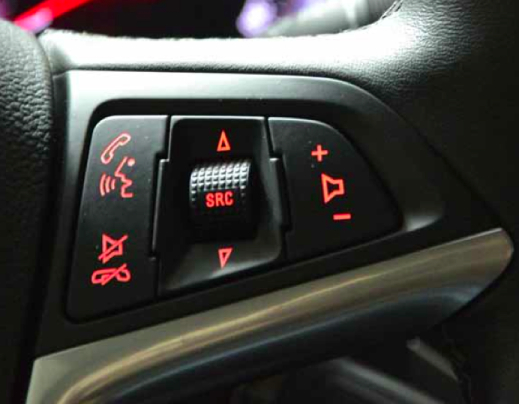 • The accuracy of voice recognition software significantly influences the rate of distraction.
• Systems with low accuracy and reliability generated a high level (category 3) of distraction.
• Composing text messages and emails using in-vehicle technologies (category 3) was more distracting than using these systems to listen to messages (category 2). (Note: a U.K. Transport Research Laboratory study found that sending a text slows reaction time by 37 percent. Using cannabis delayed it 21 percent, and drinking to the U.K. legal limit 13 percent. Conversing on a phone slowed it by 46 percent.)
• The quality of the systems’ voice had no impact on distraction levels — listening to a natural or synthetic voice both rated as a category 2 level of distraction.

The study also separately assessed Apple’s Siri (version iOS 7) using insight obtained from Apple about Siri’s functionality at the time the research was conducted. Researchers used the same metrics to measure a broader range of tasks including using social media, sending texts and updating calendars. The research uncovered that hands- and eyes-free use of Apple’s Siri generated a relatively high category 4 level of mental distraction.

To put all of this year’s findings in context, last year’s research revealed that listening to the radio rated as a category 1 distraction; talking on a hand-held or hands-free cell phone resulted in a category 2 distraction; and using an error-free speech-to-text system to listen to and compose emails or texts was a category 3 distraction – indicating that these so-called “safer alternative” remedies to the hazards of handheld cellphone use behind the wheel are actually more dangerous than the problem they purport to address.

“Technologies used in the car that rely on voice communications may have unintended consequences that adversely affect road safety,” says Peter Kissinger, President and CEO of the AAA Foundation for Traffic Safety. “The level of distraction and the impact on safety can vary tremendously based on the task or the system the driver is using.”

To assess “real-world” impact, Dr. Joel Cooper with Precision Driving Research evaluated the two most common voice-based interactions in which drivers engage — changing radio stations and voice dialing — with the actual voice-activated systems found in six different automakers’ vehicles. In the best case, evaluated voice commands using Toyota’s Entune system imposed modest additional demands as compared to the single-task baseline condition. In the worst case, those same activities using Chevy’s MyLink system imposed mental demands that were approaching the high workload baseline (OSPAN mental math). Not surprisingly, the most critical element of workload appeared to be the duration of the interaction. For the tasks selected in this analysis, Toyota’s Entune system required the least amount of interaction time while Chevrolet’s MyLink required the most. On the five point scale, Toyota’s Entune system garnered the lowest cognitive distraction ranking (at 1.7), which is similar to listening to an audio book. In comparison, the Chevrolet MyLink resulted in a high level of cognitive distraction (rating of 3.7). Other systems tested included the Hyundai Blue Link (rating 2.2), the Chrysler Uconnect (rating 2.7), Ford SYNC with MyFord Touch (rating 3.0) and the Mercedes COMAND (rating 3.1). 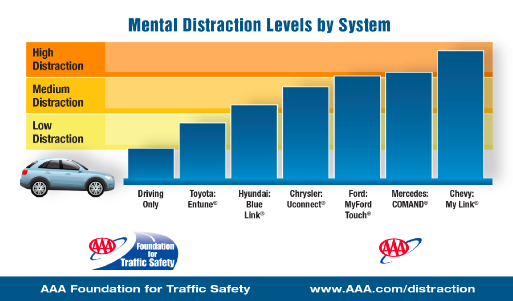 “It is clear that not all voice systems are created equal, and today’s imperfect systems can lead to driver distraction,” observes Mr. Darbelnet. “AAA is confident that it will be possible to make safer systems in the future.”

This Phase Of The Research Highlights The Variability In Demands Across All The Systems Tested.

AAA is calling for developers to address key contributing factors to mental distraction including complexity, accuracy and time on task with the goal of making systems that are no more demanding than listening to the radio or an audiobook. The organization also plans to use the research findings to continue a dialogue with policy makers, safety advocates and manufacturers.

Based on this research, AAA urges the automotive and electronics industries to join them in exploring:

• Limiting use of voice-activated technology to core driving-related activities such as climate control, windshield wipers and cruise control, and to ensure these applications do not lead to increased safety risk due to mental distraction while the car is moving.

• Disabling certain functionalities of voice-to-text technologies such as using social media or interacting with e-mail and text messages so that they are inoperable while the vehicle is in motion.

• Educating vehicle owners and mobile device users about the responsible use and safety risks for in-vehicle technologies.

AAA also is using the findings to promote dialogue with policy makers, safety advocates and industry to ensure that these emerging in-vehicle technologies won’t lead to unintentional compromises in public safety. As part of this effort, AAA has already met with safety advocates and provided copies of the report to CEOs of all major U.S. automakers.