Finally, after four months’ transition, I handed my faithful old 2011 iPad 2 off to my wife at the end of March and switched whole-hog to using the iPad Air 2 I bought back in November. I’d found letting go of the old slate harder than I’d anticipated, due to the various angularities of iOS 8, which makes the iPad 2 running iOS 7 feel like a rock of stability by comparison. Albeit slower, and the Air 2’s speed finally roped me in. Also the most recent updates to iOS 8 seem to be incrementally calming it down, although having recently installed iOS 8.3 I can attest that there remains plenty of room for improvement.

The A5 powered iPad 2 still acquits itself very respectably for a four-year-old tablet, but it is getting sluggish with some of the more advanced apps I use, and based on others’ tales of woe about running iOS 8 on older, lower powered hardware, there’s no way it’s going to get upgraded to iOS 8. 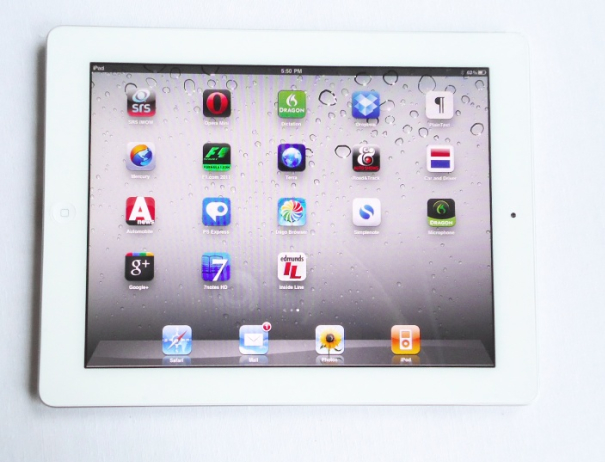 In case you’re wondering, my wife was not waiting impatiently to take possession of the iPad. She is a pretty good carpenter, and by times works on cars, but tolerates computers more than embraces them. She uses an old Windows 7 machine at work and an even older 17-inch PowerBook G4 at home, and wants them to just work with a minimum of attention and hassle, which the PowerBook does and the Windows box doesn’t. In that context, the iPad should suit well, and she’s discovering that she likes the portability and freedom to use it anywhere. However, she’s also a touch typist and misses the precision mechanical keyswitches of the Das Keyboard she uses with her PowerBook, which got a new lease on life last spring with a hard drive replacement after the original HDD croaked from old age.

Anyway, it took some convincing to persuade her to give the iPad a fair trial. Aside from the keyboard and the PowerBook’s large screen, she most profoundly misses having a mouse, and finds the clumsiness and imprecision of placing the cursor — especially for selecting and placing text on !the touchsceen — quickly gets old and exhausts her patience.

She hasn’t seriously attempted to do any real typing with the feedbackless virtual keyboard, and has been experimenting with a couple of third-party hardware keyboards. First up was Brydge+, one of the most closely-integrated iPad alternative BlueTooth keyboards available. Made of aerospace grade anodized aluminum that almost identically matches the appearance of the iPad’s “silver” anodized aluminum back and unibody chassis. 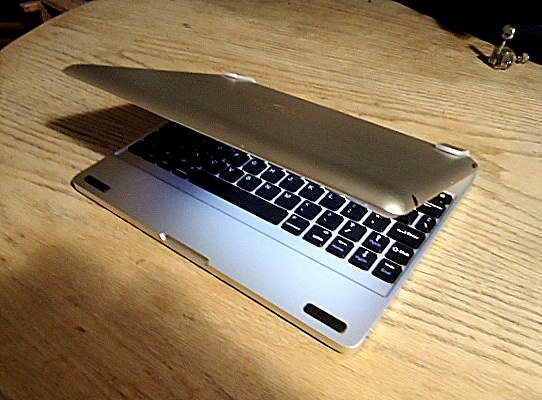 With the iPad slotted into its robust hinge mountings, the assembly resembles what an Apple Netbook might have looked like had Apple made one — very much the mini MacBook. The hinges appear to be well engineered (patent pending)and beefy enough to hold up under long-term use, as well as sufficiently stiff to ensure that the screen stays open, with more precise angle adjustment than most laptops, and stay where you set it without any play or sloppiness. 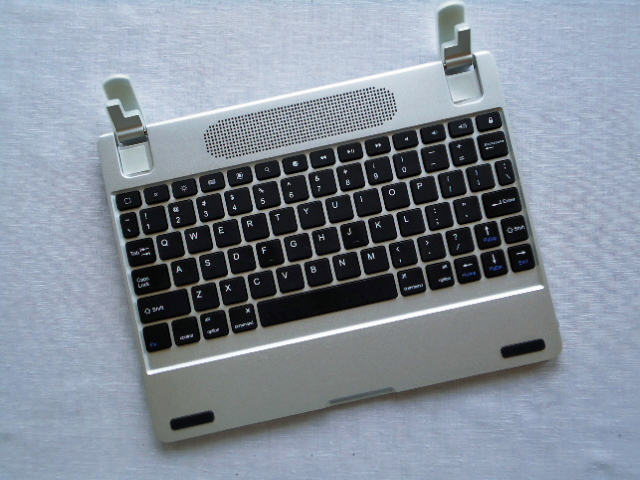 The Brydge keyboard’s appearance follows Apple practice, with an anodized aluminum enclosure and black “Chiclet” key caps. When the iPod is slotted in, it resembles what an Apple Netbook might have looked like — very much the mini MacBook. 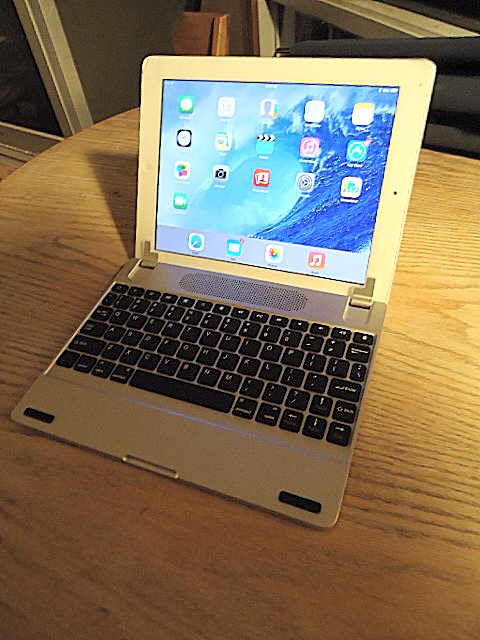 Unhappily, the Brydge keyboard’s key action comes nowhere near close to matching the feel and precision of a real MacBook keyboard. It’s short travel enough, but a bit higher-!effort than I prefer, and with more “over-center” tactile feedback and I find comfortable, but I’m extremely picky about keyboard feel. My wife says she likes the Brydge’s key action other than that it demands direct downward keystrokes. What she doesn’t like is the smaller size and closer spacing of the undersized keys, and their somewhat unorthodox layout, especially the right hand shift key positioned at the far right past the arrow navigation keys. Also regrettably there is no forward delete key.

The second keyboard my better half checked out on the iPad 2 is a Kensington KeyFolio Pro Performance Keyboard Case. This unit has the advantage of encompassing the iPad in a case basket, providing protection against it becoming a basket case from knocks, bumps, being dropped, and such. On the downside, its polyurethane faux “PU leather” material, while being somewhat impact resistant, flexible, water resistant, and providing ample finger traction for a good, solid grip, is not nearly as luxe in appearance and feel as the Brydge, albeit fair enough being as it costs a little more than one-fourth as much as the latter. You can get a deeper angle of inclination by removing the keyboard from the case module, but then you have two components to juggle. 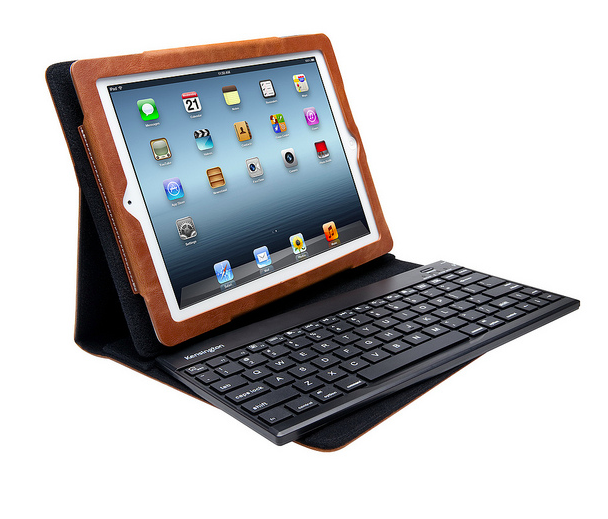 I’m even less of a fan of the KeyFolio’s key action, finding: it excessively stiff with way too much “over-center” feel for my taste. Some of the keys have rough-feeling travel, and are hanging up partway down and sometimes even “misfiring” if keystroke pressure is not dead-centered on the key cap. Again, my wife is more tolerant and appreciates the Keyfolio’s more conventional keyboard layout mapping with that right shift key in the accustomed location. The KeyFolio Pro also supports use in portrait orientation, which the Brydge does not. 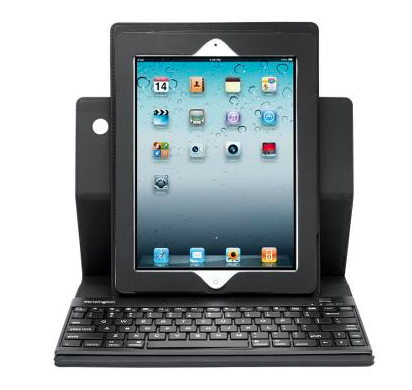 She is less enchanted by the fact that this model KeyFolio only offers two options for screen angle — either almost bolt, right-angle upright, or flat — neither of which is satisfactory for the angle of ergonomic address one needs for laptop operation, cursor positioning, text selection, and so forth. The upright mode is marginally OK for desk or table top use, but far from ideal, and flat (or makeshift propped-up with what-have-you) is what it is. 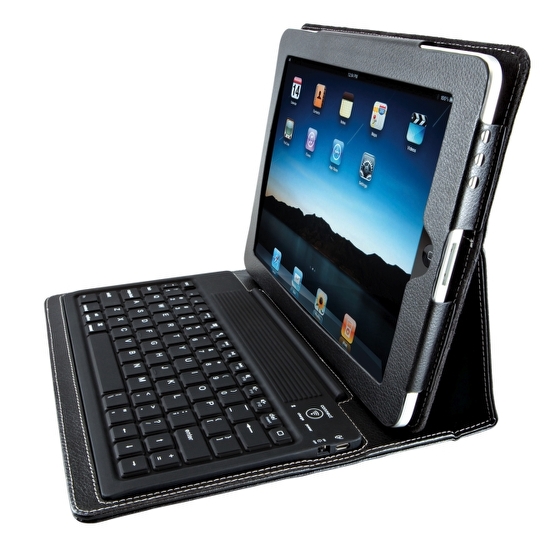 We’re also not favorably impressed by the means of securing the iPad in its upright position, being as there essentially isn’t one, save for gravity. When using a clamshell laptop as a literal laptop device, it’s preferable to have the display lid raked back at about 45 degrees.

Consequently, my wife settled on the Brydge as the better solution of the two, and will put up with the oddball Shift key positioning.

In the meantime, it’s fun to watch her getting reeled in by the iPad as a superb content viewing device that she can use almost anywhere, as opposed to sitting at her computer desk with the big PowerBook and Das Keyboard. This facility has been especially appreciated during a week-long bout with the flu. She’s disappointed by the iPad 2’s poky video playback performance (only 512 MB of RAM) and lack of support for Flash, and when she’s in a hurry she’s still inclined to reach for the old PowerBook, but I expect that as she becomes e mor comfortable and familiar with the iPad, it will get the lion’s share of her use in its second career.