According to a new mobile phone forecast from the International Data Corporation (IDC) Worldwide Quarterly Mobile Phone Tracker, smartphone shipments are expected to grow 10.4% in 2015 to 1.44 billion units. This is lower than IDC’s previous smartphone forecast of 11.3% year-over-year growth in 2015. IDC expects to see a noticeable slowdown in smartphone shipments in 2015 as China joins North America and Western Europe in a “more mature” growth pattern. However, steadily falling average selling prices (ASPs) will fuel steady growth through the end of the forecast period, with global shipments reaching 1.9 billion units in 2019.

Smartphones featuring display sizes from 5.5 inches to 6 inches are forecast to grow 84% in 2015 compared to last year, while phablets overall will make up over 71% of shipments by 2019. 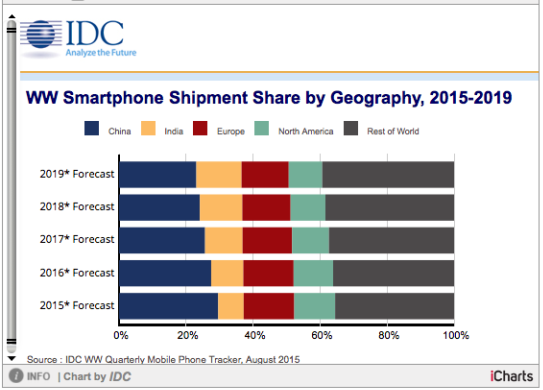 China remains the focal point of the global smartphone market in 2015, although the results haven’t been as positive as in previous years. As the largest market for smartphones China consumed 32.3% of all new smartphone shipments in 2014 its importance remains great even if its growth has begun to slow. Shipments are forecast to grow just 1.2% year-over-year in 2015 — down from 19.7% in 2014. China will remain the largest market for smartphone volumes throughout the forecast period. However, its share of the overall market is expected to drop to 23.1% in 2019 as high-growth markets like India continue to expand.

“China clearly remains a very important market. However, the focus will be more on exports than consumption as domestic growth slows significantly,” says Ryan Reith, Program Director with IDC’s Worldwide Quarterly Mobile Phone Tracker. “India has captured a lot of the attention that China previously received and it’s now the market with the most potential upside. The interesting thing to watch will be the possibility of manufacturing moving from China and Vietnam over to India. We’ve begun to see this move as a means to cut costs and capitalize on financial benefits associated with localized India manufacturing. It is the local vendors like Micromax, Lava, and Intex that will feel the most pressure from international competition within its market.”

Despite Apple’s continued success with its variants of the iPhone, the story among operating systems is not expected to change throughout the forecast, with Android’s 81% share in 2015 carrying forward until 2019. Markets with the biggest growth opportunity are extremely price sensitive, which IDC believes will not change, and this is the main reason Apple will be challenged to take Android share throughout the forecast. Even if Apple were to introduce another low-cost iPhone (e.g., C version), IDC believes the price will struggle to compete with Android OEMs that are focused on portfolios aimed at price points of $200 and less. This isn’t to suggest that Apple’s success with the iPhone won’t continue, and IDC believes its efforts to maintain significantly higher margins compared to its competitors are much more valuable than chasing share. Android shipments globally are expected to grow from 1.06 billion in 2014 to 1.54 billion in 2019, while iOS shipments will grow from 192.7 million in 2014 to 269.6 million in 2019. IDC’s view that Microsoft/Windows Phone will remain a marginal challenger at best has not changed.

On the device front, phablets (smartphones with 5.5″-7″ screens) will continue to drive shipment volumes in both emerging and developed markets. “Since Apple finally delivered a larger screen smartphone with the iPhone 6 Plus, the demand for large screened devices among consumers has been at a record high,” said Anthony Scarsella, Research Manager with IDCs Mobile Phones team. “Smartphones featuring display sizes from 5.5 inches to 6 inches are forecast to grow 84% in 2015 compared to last year, while phablets overall will make up over 71% of shipments by 2019.” It is also worth noting that this screen size (5.5″-6″) also plays the role of having the highest average selling prices for devices throughout the forecast. IDC expects this screen size band to be the placeholder for a majority of vendors’ flagship device launches throughout the forecast period. 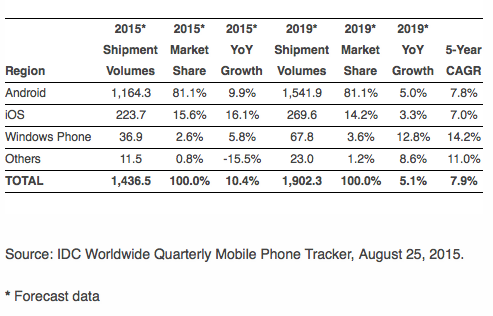