Apple needs to get the lead out pronto and develop a real professional grade, full capability touch operating system and detachable laptop/tablet hardware to run it on. At least it does if market research firm International Data Corporation (IDC)’s latest personal computer market projections for the next four years prove anywhere near accurate.

According to a new IDC Worldwide Quarterly Tablet Tracker forecast, global tablet shipments will drop to 195 million units in 2016, down 5.9% from 2015. Looking beyond 2016, IDC analysts expect the overall personal computer market to return to positive growth, albeit single digit, driven by growing consumer and business demand for productivity ready detachable devices. This hybrid category that combines slate tablets and clamshell laptops is expected to grow from 16.6 million unit shipments in 2015 to 63.8 million in 2020. And Apple has nothing to offer in the category. 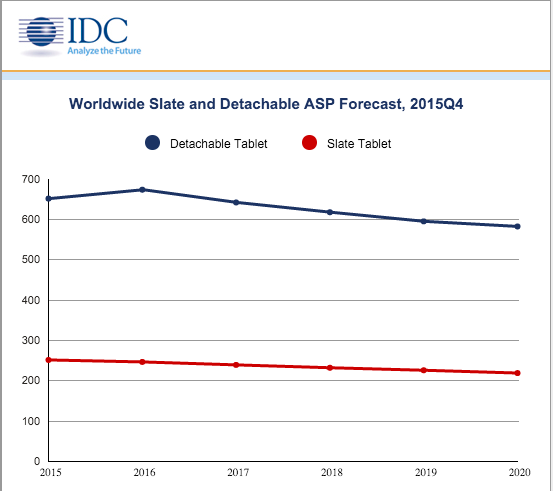 Despite Apple’s release of the 12-inch iPad Pro and rumored plans to rebrand what would have been the iPad Air 3 with a “Pro” designation as well, the naming doesn’t make it so. Both machines run the iOS operating system, which continues to have major deficiencies as a serious productivity platform.

I love my iPad Air 2 dearly — the iOS not so much. I’m drafting this column on the iPad, but I will need to transfer it to my Mac in order to finish and proof it and finally to publish it on the MacPrices Website. These final stage steps are either simply not possible or too cumbersome execute on the iPad.

iOS’s showstopping deficiencies and incapabilities include its lack of user access to a file level directory, and inability to select and extract text from USB documents with the standard cut- and paste clipboard, no way to quickly resize and do minor edits on images. Other shortcomings include no global word and phrase search engine, lack of mouse support and no support for real multi window multitasking as opposed to half-hearted kludges like SplitView and Slideover. Hardware wise, we also need a standard wired connectivity port(s) — USB 3 now being the logical interface candidate.

If what I’m calling for sounds a lot like OS X with touch support, that’s kind of the idea. I don’t care what it’s named as long as it helps me get my work done more efficiently, and I agree with IDC that Microsoft-based tablets and hybrid devices will continue to bleed market share from the other platforms, most notably Android. The obvious reason is that Microsoft’s Surface devices can run full powered Windows and supported productivity software, while iOS and Android tablet users are stuck with limited versatility and less powerful software tools.

iPad will continue to sell in significantly higher volumes than Surface devices, but Ryan Reith, Program Director with IDC’s Worldwide Quarterly Mobile Device Trackers, is right in observing that “This momentous shift in form factor will bring along the first significant impact of Windows-based devices that the tablet market has seen. Windows 10 seems to be making headway in both the PC and tablet markets, mainly driven by devices with larger screen sizes. Despite the free licensing on products under 9 inches the growth for Windows-based tablets will be primarily on devices with displays between 9 and 13 inches. Until we see a day where touch is introduced for Mac OS X and inroads are paved to bring Android and Chrome more closely aligned, we believe Windows remains the logical choice for detachable products.”

Former Apple exec. and current Monday Note commentator Jean-Louis Gassée predicts that iOS, and over time, the iPad Pro in particular, will be rendered more capable of performing tasks that, today, are better suited to laptops, citing an argument contending that iPad Pro’s primary deficiency preventing it from serving as a full-fledged dual-mode tablet/laptop is Apple’s failure to include a trackpad in the Smart Keyboard. I partly agree, although I think the iOS’s several major productivity shortcomings cited above are even more serious disabilities. However, we don’t absolutely need an Apple tablet running OS X if Apple would just fix the iOS with a visible, user accessible file system, external pointing device support, a word and phrase level search engine, better support for PDF files, and real, flexible multi-window multitasking. “iOS Pro” if you will.

Such an OS would allow Apple to offer a real detachable laptop/tablet hybrid to catch some of that “momentous shift” in user preference to this versatile category without adding touch support to OS X. Notwithstanding Apple CEO Tim Cook’s famous dismissive contention in Apple’s 2012 first-quarter earnings conference call that “You can converge a toaster and a refrigerator, but you know those things are not going to be probably be pleasing to the user,” it seems that hybrids are exactly what a growing cohort of user/consumers really do want. Do-all type tools are usually not the most elegant solution, but often they’re tool that helps you get the job done.