However, there were a few bright patches among the general gloom. Strategy Analytics’ Tablet & Touchscreen Strategies Research Director Peter King, observes that Apple’s iPadsales have declined for nine straight quarters now due to average consumers (ie: the mass market) perceiving little need to pay Apple’s premium prices to upgrade their ‘good enough tablets to the latest and greatest models, part of the explanation why Apple iOS shipments came in at 10.3 million iPads in Q1 2016 leaving it with a worldwide market share of 22% of the tablet market in the first 2016 quarter, and marking a decline in Q1 2016 of 19% annually and 36% sequentially on low seasonality following the Q4 holidays.

The pain isn’t limited to Apple. Android branded vendors shipped 30.0 million units among them worldwide in Q1 2016, down 16 percent from 35.9 million units a year earlier and down 3 percent sequentially on low seasonality. Android market share has fallen to 65 percent as high growth of Windows tablet shipments squeeze Android tablets, and as so-called “White Box” vendors consolidate making it more difficult for branded vendors to compete on price in a crowded market. Strategy Analytics’ King maintains that the key strategy challenge for Apple and major Android and Windows vendors will be how aggressively they pursue enterprise and prosumer markets with their 2-in-1 Tablets, still a growing segment.

That’s actually a bit of an understatement. according to another market research firm, IDC, detachables experienced triple-digit year-over-year growth on shipments of more than 4.9 million units — an all-time high in the first quarter of a calendar year. “Microsoft arguably created the market for detachable tablets with the launch of their Surface line of products,” says Jitesh Ubrani, senior research analyst with IDC’s Worldwide Quarterly Mobile Device Trackers. “With the PC industry in decline, the detachable market stands to benefit as consumers and enterprises seek to replace their aging PCs with detachables”. Windows shipments grew 82 percent year-on-year at 6.2 million units in Q1 2016, from 3.4 million in Q1 2015, reaching 13 percent market share, although shipments actually fell 27 percent sequentially on low seasonality. 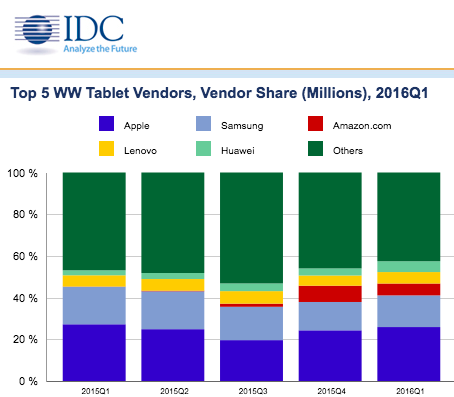 “Apple’s recent foray into this segment [with its new iPad Pro models] has garnered them an impressive lead in the short term”, Ubrani continues, “although continued long-term success may prove challenging as a higher entry price point staves off consumers and iOS has yet to prove its enterprise-readiness, leaving plenty of room for Microsoft and their hardware partners to reestablish themselves.”

Meanwhile, IDC notes that traditional “mobile first” vendors like Samsung and Huawei have entered the fray, introducing detachable tablets, but predicts that mid-range pricing of these devices will make them a difficult sell, with users seeking performance more likely to go with a Surface-like device, while the budget conscious will seek wallet-friendly options from vendors like EFun, RCA, or others.

IDC says Apple’s continued dominance in the overall market is unsurprising, and predicts that iPad’s future will be largely centered on replacements of older iPads or PCs rather than net new additions, but that the latest iPad Pro 9.7″ and more enterprise friendly storage options for the slightly older iPad Pro 12.9″ being healthy additions to the iPad lineup, and that the recent price drop on the still potent iPad Air 2 should help persuade some of the previously undecided to upgrade from their iPad 2s and other older models.

Maybe. My wife and brother-in-law are planning to stick with their iPad 2s for the es their future. Growth potential for premium priced tablets the iPad would appear to be mostly in the enterprise market, which makes Apple’s recent emphasis on “Pro” models a wise strategy. What is still needed is for Apple to fix the few remaining show-stopper deficiencies in the iPad and iOS for power/productivity users, notably access to a visible, document level file directory, real multi-window multitasking,
mouse support, better PDF support, and a standard USB-C port.

I’m provisionally satisfied with my iPad Air 2 for the foreseeable future, but if Apple fixed most or all of the issues outlined in the preceding paragraph, I would find them very hard to resist.