Automatic file synchronization is a key enabler allowing users like me to successfully juggle productivity tasks and works in progress between Macs or Windows PCs and the iPad. There are several ways that can be accomplished using cloud services. Personally, I’m a Dropbox aficionado, and have found the service transparently simple and reliable.

I work almost exclusively in plain text on both the iPad and my Macs, so have little need of word processing behemoths like Microsoft Word or even Apple’s Pages, and spend 99 percent of my writing and editing time in plain text editor applications.

I had an epiphany back in the late ’90s, at which time I was working mainly in Microsoft Word 5, but had experimented with a variety of other word processors, most with proprietary formats, and it dawned on me that the likelihood of being shut out of access to files saved in them in the future was high. For a while I switched to Nisus Writer, whose document format was plain text readable by any text editor, but it soon occurred to me that thanks to the Internet and email, I was rarely printing formatted documents any more anyway, so why not just switch to a text editor and work in plain text? I did, and I’ve never looked back. For access to Word files, I use Apple’s Pages, the free iPad version of MS Word, or online Google Docs.

My anchor text synchronization app on the Mac is Bare Bones Software’s superb and free TextWrangler, although I also use Trans-Tex Software’s $15 shareware Tex Edit Plus extensively for composition, editing, and html markup, tricked out with a raft of AppleScripts developed over two decades of use that tailor TE+ to my particular needs and tastes.

Thanks to the macOS’s accessible document based Finder file directory system, Dropbox synching on the Mac is simply a matter of saving or moving files to the Dropbox folder. Unfortunately, due to Apple’s pig-headed resistance to adding a visible document based filesystem to the iOS, things are considerably more complicated on the iPad. You need a text editor with Dropbox support to transfer files from Mac to iPad and the reciprocal, and my main tool of choice for that is 433 Labs’
PlainText 2, which features file synchronization with both Dropbox and iCloud, and a simple, paper-like text editor and an extended virtual keyboard with especially handy cursor-arrow positioning keys. There is also a useful character and word count feature in the PlainText 2 text editor. 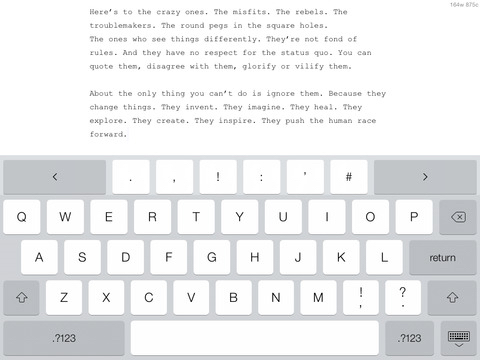 One of PlainText 2’s advantages is its lack of fancy bells and whistles. It’s essentially a platform for file synchronization and organization and uncluttered writing. Any changes made to a file opened in PlainText 2 will be automatically saved to the corresponding file in the iDevice, iCloud or Dropbox folder and files can be moved from one folder to another. 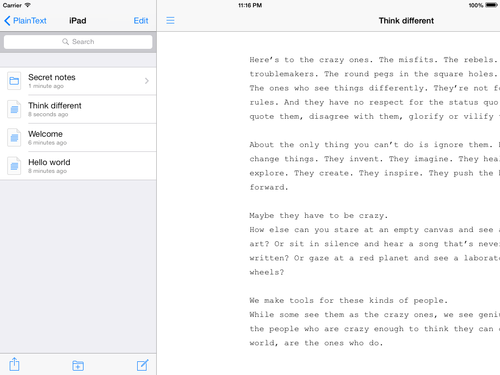 PlainText 2 has three default file directories, and allows the user to select files saved respectively on the iDevice itself, on Apple’s iCloud, or on Dropbox. The directory windows also have a search function for words in file names.

However, while it’s still working fine in iOS 9, it’s worrisome that Plain Text 2 — originally developed by Hog Bay Software, and acquired by 433 Labs in January 2014 — hasn’t been upgraded since Oct 15, 2014 when version 2.0.5 was released. Hopefully it will continue to work as the iOS and Dropbox evolve.

PlainText 2 supports iPad and iPhone, is currently free, and can be downloaded at:
https://itunes.apple.com/jp/app/plaintext-2/id769101727?l=en&mt=8

An alternative to PlainText 2 for Dropbox sync iOS is Permanote. Formerly called Nebulous Notes, this $5.99 text editor app has a more extensive feature set than PlainText 2, but at the expense of some simplicity, speed, and six bucks, plus a paid upgrade every two years. Hopefully enough users will buy in to ensure its ongoing development.

Permanote supports split-screen mode for multi-tasking on iPad (Air 2 and mini 4 and later). Alphabetical Views allows you to simply tap the A-Z letters on the right-hand-side or scroll to the top to filter files by name. 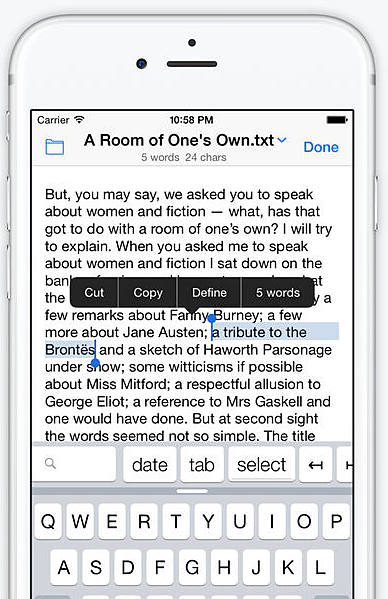