Apparently, the 10.5-inch iPad Pro is a go. The Taiwanese Apple watcher site recently reported that its anonymous sources inside the upstream supply chain say mass production of the new iPad began in March-April, and shipping volumes have been increasing, expected to hit 600,000 units monthly by July.

Apple has a lot riding on its new tablet, whose marquee feature is shoehorning a modestly larger display into a machine with the same footprint as the 9.7-inch iPads, by virtue of narrower screen bezels. Of course there will be internal tweaks as well, such as a quad-core A10X system-on-chip, but the operative question is whether it will be enough to convince more high end iPad users to upgrade their tablet hardware.

Indeed, the immediate future doesn’t appear terribly promising according to the latest report from International Data Corporation’s (IDC) Worldwide Quarterly Personal Computing Device Tracker, projecting that sales of high-end slate tablets will continue to decline at double-digit rates in 2017, with the rate of contraction slowing in the later years of the forecast period. 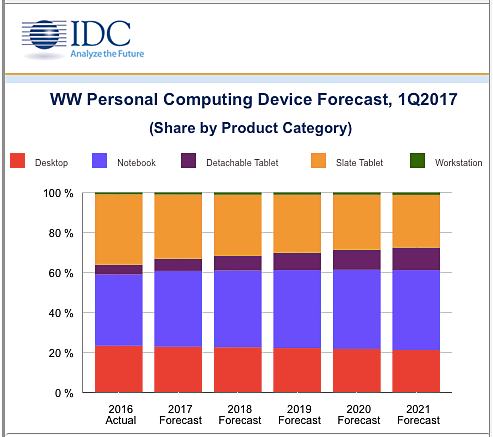 IDC expects detachable Windows tablets to resume strong growth, albeit coming off a weaker than expected 2016 for detachable tablets. IDC has consequently reduced its overall detachable tablet sales forecast with the largest reductions coming from the United States and Asia/Pacific (excluding Japan). 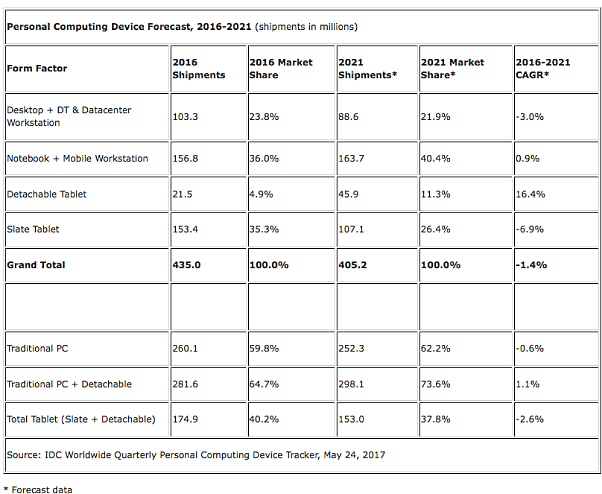 “Sales of detachable tablets haven’t quite met our expectations and as a result we’ve reduced volume projections throughout the forecast period,” said Ryan Reith, program vice president with IDC’s Worldwide Quarterly Mobile Device Trackers, in a release. “New detachable tablet products continue to hit the market but the reality of this relatively new product category is that Microsoft and Apple control close to 50% of the volume and both companies have very cyclical product releases and relatively high price points. One piece of industry movement that we continue to watch closely is OEMs that have traditionally focused on the smartphone space moving further into the Windows device market. This is happening with both detachable tablets and notebook PCs, and as recently as this week Huawei announced very attractive products in both categories.”

Of course, Apple’s detachable — so to speak — is actually a 12.9 inch iPad Pro with an optional keyboard that runs the smartphone space iOS, and the company has no real competitor for Microsoft’s Surface detachables, which can run full productivity versions of Microsoft’s desktop operating system. Nor does Apple offer a clamshell notebook computer with a touchscreen, either detachable or non-detachable.

Apple insists that having distinct touchscreen and conventional input operating systems makes both modes a better user experience, but the iPad’s inability to run macOS productivity applications and perform certain key functions makes using it as a laptop replacement a non-starter for many productivity oriented users, and Apple’s argument seem like making a virtue of necessity inasmuch as there is no touch enabled version of macOS equivalent to more versatile touch supportive Windows. 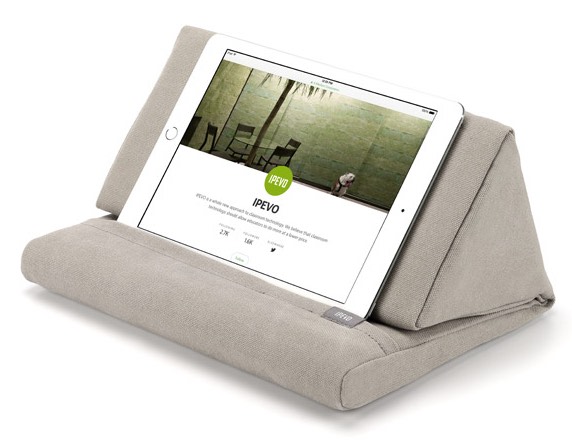 I use my iPad Air 2 for quite a bit of production work, particularly online research and some composition and editing. I don’t mind using the onscreen virtual keyboard with the iPad resting on an Ipevo PadPillow, or with an iPad Air, mini, or early 2016 iPad, the very inexpensive PadPillow Lite (my personal fave). 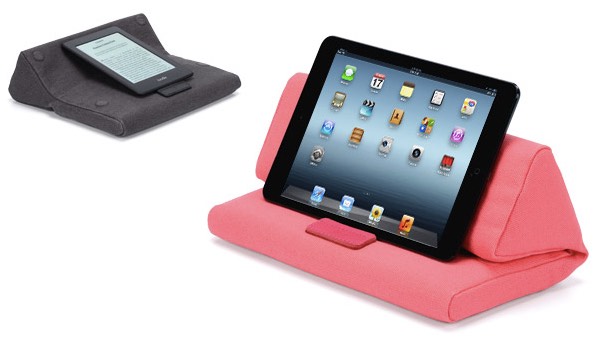 However, there are still way too many compromises, and necessary tasks the iPad can’t perform efficiently, or in some cases at all, for it to come even close to being a practical replacement for my MacBook Air. For me, a fully capable workhorse platform needs a user-accessible file directory, real multitasking with support for multiple open apps and open windows, drag and drop between open document windows, document level content search a la macOS Spotlight. There also should be some sort of standard hardware interface (USB-C seems logical) in addition to or replacing Apple’s proprietary Lightning connector, and a slot for hardware data storage or transfer, and any device with professional grade aspirations should support multi user logins.

The iPad’s lack of mouse support for more precise selection and editing of both text and image content is also a show-stopper. And no, Apple’s pricey “Pencil” stylus is not an adequate substitute for a real mouse. I find Apple’ stubborn stonewalling of iPad mouse support difficult to fathom. The iOS already supports Bluetooth keyboards, so adding a mouse driver should be a relatively simple matter. Those who prefer to use touch input could continue to do without inconvenience, but the mouse option should be there for those of us who need it in order to work efficiently. I use a mouse whenever practical with my laptops, and the ability to do the same with the iPad would be a substantial performance booster.

While we’re at it, the same principle applies to Apple’s dogged rejection of touchscreen input in notebooks, although adding touch support to the macOS would be a more formidable undertaking than adding a Bluetooth mouse driver to the iOS. Touchscreen input for laptops can be handy, but nobody is obliged to use it.

The 9.7-inch iPad Pro introduced last year is a nice piece of work, but none of the tweaks and features Apple added to ostensibly elevate it to “Pro” status tempted me to upgrade from my then not yet a year old iPad Air 2, which is still in fine fettle after 18 months service. The anticipated new 10.5-inch iPad Pro sounds interesting, but a bigger display is not enough, and if Apple wants to get serious about reversing the three and a half year iPad sales slump, addressing the needs and preferences of frustrated productivity users would seem like a good place to start.