One of the most important new features coming in iOS 11 is Do Not Disturb while driving, intended to help drivers stay more focused on the road. With Do Not Disturb while driving, your iPhone can detect when you may be driving and automatically silence notifications to keep the screen dark. Users also have the option of sending auto replies to contacts listed in Favorites to let them know you’re driving and unable to respond until you’ve either pulled over or arrived at your destination. 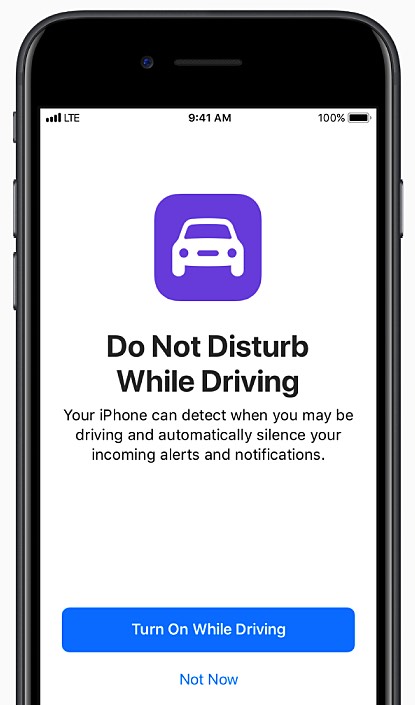 Besides this forthcoming built-in solution in iOS 11, a distracted driving app available right now on the App Store is designed to significantly reduce the risk of collisions by encouraging safe and attentive driver behaviour. The AutoAdvisory app from Ottawa, Canada based aerospace engineering firm Specific Range Solutions has been designed for the iPhone with the objective to significantly reduce risk of driver distraction. 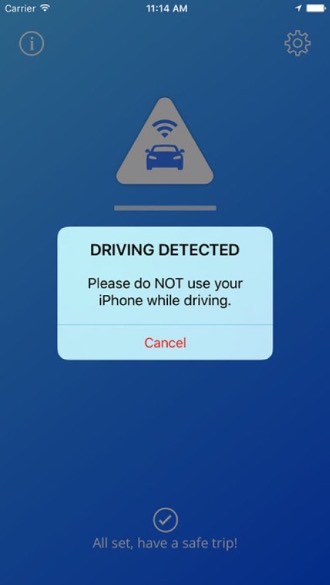 The intelligently interactive AutoAdvisory app advises the driver not to use their iPhone when driving is detected, continuously monitors their device to ensure its not unlocked during trips, and provides feedback at the end of the trip via the app’s Auto Debrief feature. — all while maintaining privacy and notaffecting your iPhone’s functionality or user access. Privacy data are neither collected nor shared. 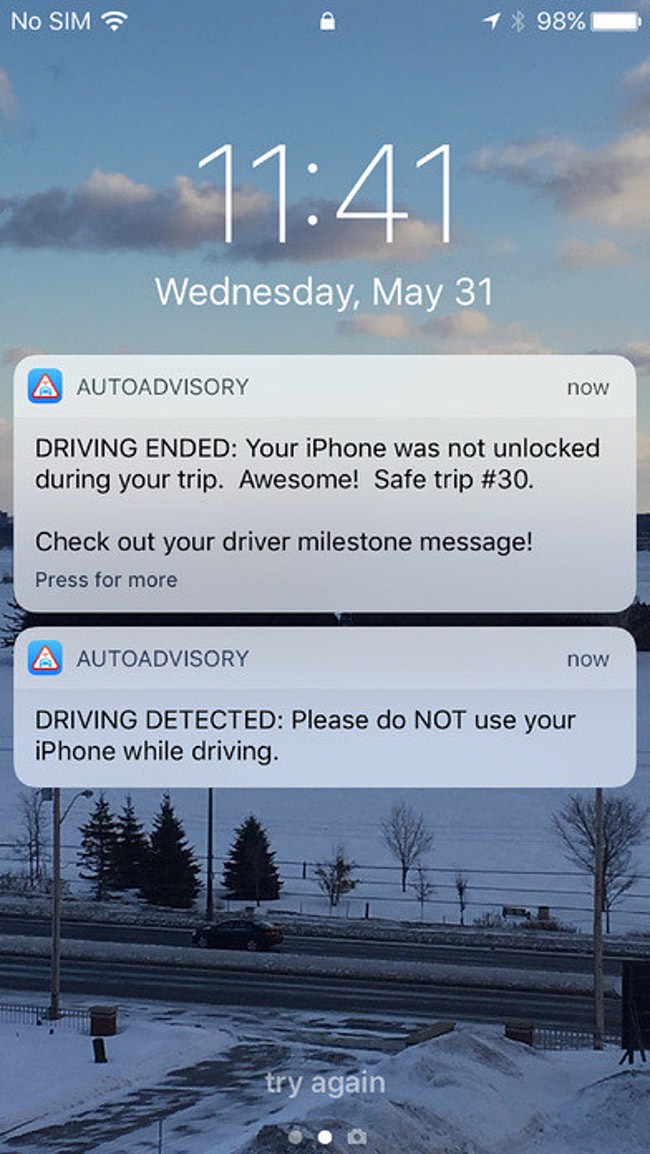 “Our ultimate goal is to save lives” said Specific Range Solutions Ltd. founder Omer Majeed in a release. “The solution therefore needed to be safe, effective and reliable. We are an aerospace engineering company, and I am a commercially rated pilot, so we applied the same level of rigor in designing AutoAdvisory 2.0 as we do for our aerospace clients.”

AutoAdvisory 2.0 also enables drivers to share their safe driving milestones via Facebook and Twitter with family and friends. These milestones could be used by a parent to reward a teen with a tank of gas for safe driving, or a fleet manager to incentivize drivers to keep their focus on the road. 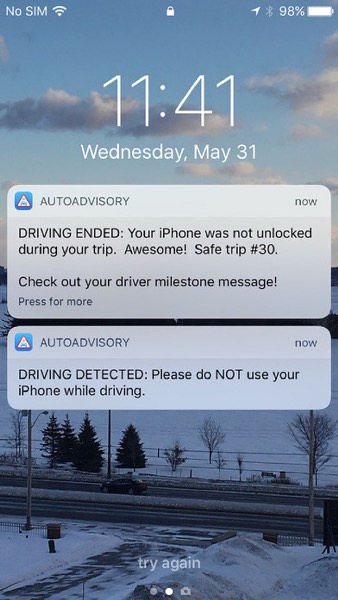 AutoAdvisory requires iOS 9.3 or later on an iPhone plugged into a Bluetooth-equipped vehicle or the vehicle charger in order to function, and runs in the background once it’s turned on. The app is compatible with iPhone, iPad, and iPod touch

Apple and Specific Range Solutions are to be congratulated for positively addressing this troubling issue. Distracted driving has become a huge public health problem that has continued to grow. The operative question is of course whether enough iPhone owners will use anti distracted driving tools like Do Not Disturb while driving, AutoAdvisory, or other similar software to make a significant statistical difference. If you need some convincing as to why you should, read on. As a South African Western Cape government public service ad rhetorically queries and powerfully illustrates: “You can’t even text and walk, so why do you text and drive?”

The 2015 National Occupant Protection Use Survey (NOPUS), found that at any given daylight moment across America, approximately 660,000 drivers are using cell phones or manipulating electronic devices while driving, and handheld cell phone use continued to be higher among female drivers than male drivers, highest among 16- to 24-year-old drivers and lowest among drivers aged 70 and older.

Anything that shifts your attention away from driving can be a distraction. examples include sending a text message, talking on a cell phone, eating and drinking, talking to passengers, grooming, reading including maps, using a vehicle navigation system, watching a video, and adjusting a radio, CD player, or other audio device, Any of these distractions can endanger the driver and others.

Texting while driving is particularly dangerous because it combines all three types of distraction. Sending or reading a text message takes your eyes off the road for about five seconds, long enough to cover an entire football field with your eyes closed while driving at 55 mph. Research cited by the Anthony Phoenix Branca Foundation four out of five distracted driving collisions involve a motorist who only looked away for three seconds.

Research by the Virginia Tech Transportation Institute found that drivers who text are 23 times more likely to be involved in a crash or near crash. The Canadian Automobile Association says about 26 percent of all car crashes involve phone use, including hands-free phone use.

The National Highway Traffic Safety Administration (NHTSA) notes that 3,477 people were killed and 391,000 injured in 2015 in crashes involving distracted driving, and that available research indicates cell phone use while driving, regardless of whether the device is a hands-free or hand-held, degrades a drivers performance. Distracted drivers are more likely to miss key visual and audio cues needed to avoid crashes, and while hand-held devices may be slightly worse, hands-free devices are not risk-free. Drivers using hands-free phones are less aware of the traffic around them, and tend to react more slowly to critical event, or worse — may not detect the danger at all.

The American Automobile Association (AAA) cites a Pew Research Center finding that text messaging has become a key component in day-to-day interactions amongst teenagers, with 55 percent of teens spending time every day texting, sending an estimated 80 text messages per day. An AAA Foundation survey found that nearly 50 percent of teen drivers admitted they had read a text message or email while driving in the past 30 days, noting that the NHTSA√ïs National Occupant Protection Use Survey also showed that the percentage of young drivers seen visibly manipulating a hand-held device had quadrupled from 2007 to 2014.

According to the Centers for Disease Control and Prevention (CDC), approximately nine people are killed and more than 1,000 injured each day on United States streets and highways in crashes that are reported to involve a distracted driver.

The NHTSA also cites research showing that a significant difference between talking on a hands-free cell phone and conversing with a passenger in the vehicle is that a the latter can monitor the driving situation along with the driver and pause for, or alert the driver to, potential hazards, whereas a person on the other end of the phone line is unaware of the roadway situation. On the other hand, crash risk is increased when there are two or more teens are in the vehicle, and while it has not yet been proven that this is attributable to distraction, the NHTSA are confident that distraction plays a role.

Recent research by the AAA has also discovered that distraction “latency” lasts an average of 27 seconds, meaning that, even after drivers put down the phone or stop fiddling with the vehicle’s navigation system, they are not immediately fully engaged with the driving task. For example, texting while stopped at a traffic light can negatively affect full driving engagement once the light turns green for an average of 27 seconds after you’ve stopped texting. Another AAA study showed that teen drivers were distracted almost a quarter of the time they were behind the wheel. Electronic devices, such as texting, emails, and downloading music, were among the biggest distractions, accounting for seven percent of the distractions identified in the study.

Evidence is overwhelming that distracted driving due to phone use is the new impaired driving. So do the right thing and download AutoAdvisory right now, and/or use Do Not Disturb while driving when iOS 11 becomes available. Or just transport the cell phone out of reach in the glove box, back seat or trunk and keep fiddling with in-car audio devices and nav systems to a minimum. If either demands significant concentration, or you simply must read/send a text or make/answer a phone call, pull over and stop in a safe place so you can give them and driving respectively your full attention.