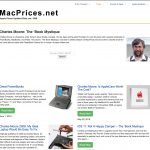 FEATURE: 06.11.18 – Charles W. Moore, a writer here on MacPrices, has been missing in action for a number of months now and inquiring minds want to know: where in the world is he and if he is alive and well.

Moore, who has written “The ‘Book Mystique” column for MacPrices since 2011, last wrote a story for this website in October 2017. He has not written anything nor has he been in contact since that time.

The last this writer personally heard from him was in August 2017 when an email was sent to him to find out current contact information for Dan Knight, publisher of Low End Mac, who had posted on that site that he (Knight) was in search of job leads and one was found to share but this writer could not reach Knight at the email address on file as it was inactive. An attempt to get in contact with him again much more recently after that for a LinkedIn recommendation (first in December 2017 and then again in February of this year) was unsuccessful and emails to him went unanswered.

Moore has been a fellow colleague of this writer going as far back as 2006 both working for the website PowerBook Central, he having started there three years prior. (PowerBook Central is now merged with MacPrices as of May 2018).

He is also a former writer at the aforementioned website Low End Mac, a site this writer also writes for (since March 2018), where he wrote the “Miscellaneous Ramblings” column from 1999 to 2012 along with various news roundups through 2013. Before joining that site as a regular writer, he was a columnist at the long since defunct MacTimes online publication working alongside Low End Mac publisher Knight.

For those who haven’t heard of MacTimes, it was an all-in-one online resource that pooled together various independent Mac related websites which included Low End Mac as one of the first to come onboard in late 1997. The idea was that with enough site traffic from the power of the combined resources, it would attract big advertisers to the MacTimes website. However, unfortunately, the ingenious venture would only last for a year and a half before collapsing due to, according to Knight, a flawed financial model.

“Charles was a significant force in shaping Low End Mac, especially with his focus on PowerBooks – Pismo in particular, after he left his WallStreet behind. He had the same focus on value that we have always prized, and it was a sad day for both of us when he left Low End Mac,” says Knight.

Moore has been AWOL (absent without leave) and this writer and the publishers of both sites are wondering of his whereabouts. All parties involved are hoping that any colleagues, friends, or family members of his who may be reading this article will get in touch and pass on information about his current status. Good news is what is certainly hoped for.

“Charles was a dedicated Mac laptop fan, and we always enjoyed his perspective on PowerBooks, iBooks, and the various MacBooks. We hope he is doing well!” says MacPrices publisher and founder Steve Hildreth.

If you have any information about the status of Charles W. Moore, please contact Joe Leo.