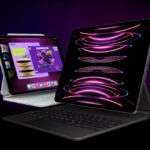 Apple is reportedly developing 11-inch and 13-inch OLED iPad Pro models that will come out in the first quarter of 2024. Apple analyst Ming-Chi Kuo initially suggested that the first OLED iPad would launch in 2022 but this plan has since been abandoned. Most previous rumors have centered on Apple making a 12.9-inch iPad Pro with an OLED display, but new evidence suggests that this may just be the beginning. OLED technology delivers an incredibly high contrast ratio and high resolution. Apple has reportedly delayed the first OLED iPad after terminating a display partnership with Samsung for manufacturing some screens. Apple would like to radically upgrade the displays in its iPad Pro and MacBook Air with OLED screens, but it may not happen until 2024 or beyond.