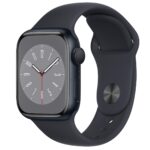 In testing, it is found that the Apple Watch Series 8 can charge a bit faster, for example, from 70% to 80% in 10 minutes, while the SE charged from 70% to 77% over the same time period. The Series 8 is capable of fast charging with an applicable Apple USB-C charger.

The Series 8 has more health-tracking features than the SE, such as its new wrist temperature measurements, blood oxygen saturation readings and the ability to take an electrocardiogram. The SE does not have these features, although it does feature some health-tracking capabilities such as tracking workouts, detecting hard falls, measuring heart rate, and mirroring iPhone alerts.

The Series 8 is available in a pricier stainless steel finish, and the aluminum version comes in an additional Product Red color option not available on the SE.

Overall, there are a number of differences between the Apple Watch Series 8 and the SE. From the price to the display size, battery life, health features, materials used, and the ultra-wideband chip,.