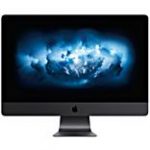 The rumors are flying and speculation is running rampant around the possibility of a new Apple iMac Pro. It is expected to be a powerful computer in Apple’s lineup, and people are already asking what features it could possess.

The current rumors suggest that Apple will be incorporating a version of Apple’s new M2 processor, probably an M2 Pro or M2 Max with up to 96GB of available memory and up to 8TB of SSD storage. It’s also possible that Apple will delay its introduction until the 3nm M3 processors are ready.

Another potential feature for the iMac Pro is a greater focus on wireless connectivity. This would include the latest Wi-Fi and Bluetooth standards, allowing for faster data transfer speeds and improved connection stability. There are also rumors of a redesigned Magic Keyboard with LED backlight, as well as a new Magic Trackpad with haptic feedback.

The new iMac Pro is also expected to have a much slimmer design than its predecessor, featuring a thickness of, at most, 3mm at its thinnest point. This would make it one of the slimmest desktop computers on the market and much easier to move around. Size-wize, it’s likely to be similar to the current 27″ Apple Studio Display, and may also offer Standard as well as Nano-Texture Glass.

Finally, Apple is also rumored to be introducing a new way of mounting the iMac Pro. Instead of being bolted to a table stand, the new iMac Pro could feature a unique magnetic mounting system. This would allow for easy adjustment and removal of the computer, as well as improved airflow for better cooling.

In conclusion, if the rumors are to be believed, the upcoming Apple iMac Pro could be one of the most powerful and versatile desktop computers ever created. With its cutting-edge hardware, sleek design, and improved wireless connectivity, it is sure to make waves in the tech world. We’ll just have to wait to see if the rumors come true.