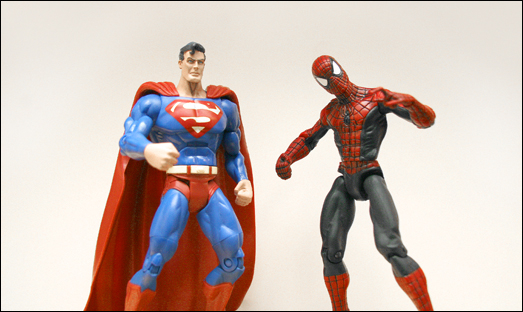 'AMERICA'S GOT TALENT': Spider-Man and a Hasselhoff-looking Superman team up to star in a video created by a talented YouTube user, done in the style of Apple's "Get a Mac" spots on TV. (This original photo is not a screenshot from the YouTube videos mentioned in this article). [PHOTO: ©2007, J. Leo]


FEATURE: (7.12.07)-- We've all seen parodies of the "Get a Mac" ads created by ordinary people, with some going as far as Microsoft employees making an internal Zune vs. iPod film. In the spirit of the comic-book-hero-filled Summer movie season, we share with you the newest entry. Not Mac vs. PC, but Marvel vs. DC, created by? Well... it's just some random guy.

In this week's edition of the Marvel Newsletter (which you can get in your e-mail inbox if you subscribe to it) is a video clip of Spider-Man having a friendly neighborhood conversation with his counterpart from the other comic book universe, Superman. The two characters are a fitting placement since they both have journalism-related day jobs--Spidey a photog and Supes a reporter--plus they both have red & blue suits, and they both can fly.

Well, one really flies, and the other does so by spinning webs. They also both live in mirror universes, Spider-Man in a real-life (somewhat) New York, while Superman lives in a New York City-esque "Metropolis."

Why they would choose to bicker with each other if they're both good guys and fight super-villains is best left to those that grew up and still follow the comic book world. (When two superheroes from different universes meet, one always thinks the other is a villain. It even happens sometimes when two heroes from the same universe meet for the very first time).

But the comic fun in all of this is setting them in the roles of Mac and PC guys. It's no secret that, of course, Marvel and DC Comics have always been rivals. Kind of like Apple and Microsoft. (Star Trek and Star Wars, what else?). You can see where this is all going now, right?

So who is the Mac guy? Spider-Man. He and Superman quibble over each other's movies, as each one tries to point out who has the better comic book company and film franchise. In the style of Mac vs. PC, Spider-Man explains himself intelligently while Superman makes himself look not so, super. (Doesn't the voice remind you of the guy doing the iPhone commercials?)

What's funnier is that Marvel Comics didn't create these ads, and they aren't ads to begin with. They were just some random guy's way of having fun on YouTube with his spare time (and having a purpose for his collection of action figures perhaps?).

Unfortunately, this random guy isn't getting paid for his work. Just who is this guy? Meet Michael Angrusso, whose YouTube alias happens to be, "ItsJustSomeRandomGuy."

Angrusso hopes that will change soon with the publicity spotlight now on him. In fact, according to Angrusso on his own blog, Marvel was the one requesting he create additional videos since they like them so much.

The first video was created four months ago. This, and the three subsequent creations after the original, are modeled after Apple's "Get a Mac" campaigns. Everything from the cutesy tune playing in the background, to the actual white background itself. If you watch closely, you might even see the action figures displaying emotions much like Justin Long and John Hodgman do.

The others by Angrusso aren't so tied to the Mac vs. PC / "Get a Mac" theme, but still contain the humor and flair started by the originals. Angrusso's originals, not Apple's television spots.

The four original videos--"I'm a Marvel, I'm a DC" Parts 1 through 4--are featured on Marvel.com's videos section, though they don't currently have their own classification/section on the page (which seems to point to Marvel approving of the content, but not necessarily backing or endorsing Angrusso's work, leaving it open to the no compensation clause).

There are currently 13 videos on the web in Angrusso's YouTube page, with more yet to come.