It looks like we may not have to wait much longer to see what finally materializes as a new, larger-panel iPad (Pro/Plus?) Usually reliable Apple product prognosticator KGI Securities analyst Ming-Chi Kuo has been widely cited lately saying the 12.9-inch iPad Pro will go into commercial production in September or by October latest, and will feature a Force Touch-enabled Stylus — a la Microsoft’s successful Surface Pro 3 tablet computer.

Last week, Korea’s ETNews reported that Apple is planning to release an iPad Pro with a cutting-edge technology Oxide TFT Panel soon. The article explains that Oxide TFT Panels have faster electron traveling speed than the previous a-Si TFT LCD panels, and their low-powered design facilitates greater battery efficiency and maximization. Additionally because panel thickness can also be reduced up to 30 percent compared with previous panels,, Oxide TFT technology is favorable to the obsession with extreme thinness and lightness.

ETNews says Oxide TFT panels will be introduced in the iPad Pro beginning in September, although it’s unclear whether that means production or shipping product entering consumer channels. We’ll either have the big iPad on sale or at least a better idea of when it will be on sale after Apple’s September 9 event.

The ETNews report says Apple will also be using the Oxide TFT technology in other products such as iMac, smaller iPads and others going forward, with Korean and foreign display businesses are increasing their outputs according to this flow.

There’s a lot riding on this product for Apple. The iPad Air and mini have been bleeding sales volume for nearly two years now, partly due to the popularity of larger screen phablet smartphones. While the tablet experience on a 5-6 inch panel is markedly inferior to that with either an iPad mini or Air, many people apparently are deeming it “good enough” for their needs. With sales of the iPhone 6 Plus continued robust, much of the iPad market cannibalization thus coming from in-house — a better sort of problem to have than some.

However in that context one of the beauties of a larger iPad for Apple is that it will not be competing with smartphones, although if successful it will likely have some impact on MacBook sales. Much will depend on pricing. If they can offer a base model, analogous to Microsoft’s Surface 3 that starts at $499 for a figure significantly lower than the 11.6-inch MacBook Air’s $899 price point, allowing for a comfortable price spread. The iPad Pro will be larger than the Surface 3, and have a more powerful CPU and graphics processor, so an entry point somewhat higher should be possible, although the Surface 3 retains the advantage of being able to run the full version of Windows 10 with all the productivity application, multitasking, versatility, and flexibility that affords. Windows 10 is now reportedly running on 75 million machines worldwide.

As a productivity-oriented iPad 2 user, I contend that the iOS is an inferior OS platform to OS X or Windows for those of us who want to do serious work on a tablet, which along with its more then competitive price explains why the Surface 3 is reportedly enjoying robust sales growth while most other tablet computer product sales are in decline.

Blogger Bob Skelley maintains that the time is right for Apple to swallow its pride and get on with overcoming obstacles to an iOS/OS X merger. I agree, but it’s not going to happen this year, with iOS9 and OS X El Capitan remaining separate entities.

Others have suggested that it’s time for a professional Apple tablet with Intel Core i5 power and able to run OS X to compete with Microsoft’s i5 powered Surface Pro 3. I would find that prospect exciting, as log as battery runtime and low heat generation could be maintained. Such a machine would more appropriately be classified as a Mac than as an iPad, but I’m not holding my breath waiting for one of those either.

The iPad Pro will definitely run iOS 9, and almost as definitely have an Apple A9 or A9X ARM based system on chip, although mercifully it will, along with the iPad Air 2 also support iOS 9’s several split windowing functions. However, regrettably still not a user accessible file directory. That latter is still a serious productivity shortcoming — indeed in some instances a show-stopper — for some of us.

However, Apple does appear to be on the right track with a bigger iPad. According to the latest update from Strategy analytics, by 2019, shipments of tablets with screen sizes 11″ or greater will nearly double to 19.3 million units, grabbing a 7 percent share of the market, which will be a combination of enterprise adoption of large screen-sized Tablets (for PC replacement and workflow transformation) and consumer adoption of 2-in-1 Tablets.

Speaking of which, 2-in-1 devices are a segment of the market where Apple has never chosen to compete, but perhaps it should. A hybrid MacBook with a detachable display-cum-tablet running OS X would have wide appeal in my estimation.

International Data Corporation (IDC)’s latest quarterly market snapshot and update notes that while the tablet market’s overall trajectory of has not changed significantly over the past year and a half, the 2-in-1 segment, also referred to as detachables, convertibles, or hybrids, is starting to gain market traction, and IDC expects the 2-in-1 segment to grow a whopping 86.5 percent year over year in 2015 with 14.7 million units shipped. Although this volume is far below that of the more affordable slate tablet segment, IDC believes these devices appeal to an audience seeking an alternative to pure tablets with smaller screens, and expects the share of larger screen (>10″) tablets and 2-in-1’s will grow from 18.6 percent in 2014 to 39.5 percent in 2019, fueled by the impact of phablets and a growing commercial appetite for productivity solutions. 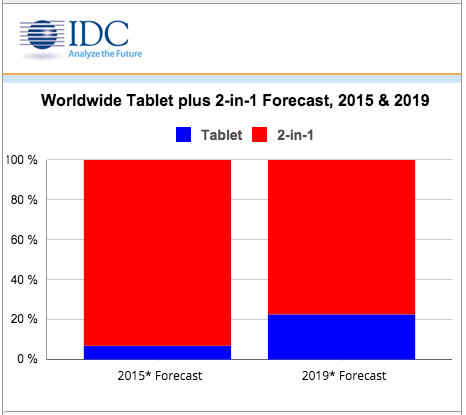 “In the past, the biggest challenges with 2-in-1 devices were high price points, less than appealing designs, and, quite frankly, lack of demand for Windows 8, which was the OS most devices were running,” says Ryan Reith, Program Director with IDC’s Worldwide Quarterly Mobile Phone Tracker. “With more OEMs offering devices in this segment, prices have started to come down significantly. We estimate that over 40 different vendors shipped 2-in-1 products in the second quarter of 2015, which is up from just 14 vendors two years ago. With the launch of Windows 10, the introduction of more Android-based products, and the possibility that Apple will unveil a larger, screen-detachable iPad, this is the space to watch.”

“Commercial segments will play a crucial role in the future of 2-in-1’s,” comments Jean Philippe Bouchard, IDC Research Director, Tablets. “It will take some time but we expect that once IT departments are done evaluating Windows 10 and the awaited iPad Pro, they will start migrating some their portable PC and tablet installed base towards 2-in-1’s, which will accelerate the adoption of the form factor. So far, this category has been the led by Microsoft with its Surface product line. But with the arrival of the iPad Pro, the launch of Windows 10, which is better suited for the 2-in-1 form factor, and the introduction of Intel’s Skylake silicon, we expect a flurry of new devices to launch between now and December 2015.”

Strategy Analytics Senior Analyst, Tablet & Touchscreen Strategies Peter King predicts that “A dramatic shift is underway among Tablet screen sizes to accommodate more use cases for the Tablet. The success of Microsoft’s Surface Pro 3 — and now the lower-cost Surface 3 — has opened the market for traditional PC vendors to sell larger screen-sized Windows Tablets to compete for PC replacement dollars. Additionally, 2-in-1 Tablets have gained market share as costs have come down, placing 10″ and 11″ Windows Tablets in the mid and low price tiers for mass market consumption.”

Eric Smith, also a Strategy Analytics Senior Analyst, Tablet & Touchscreen Strategies, concurs, observing that “Just as Phablets have eaten away at the smaller end of the Tablet spectrum, the gulf between PCs and Tablets is shrinking every day. Major vendors are pushing the boundaries of all three major mobile operating systems and hardware configurations to transform the Tablet into a content creation device. The ultra-portability and versatility of 2-in-1 Tablets and premium Slates like Surface Pro 3 and iPad Pro will enable the Tablet to increasingly serve new market segments, such as field work, healthcare, retail point of sale, education, and even desk work.”

Back to the iPad Pro, it will likely soon have more competition from other Windows 10 tablets besides the Surface machines. Peter King, Service Director, Tablet & Touchscreen Strategies, says: “A dramatic shift is underway among Tablet screen sizes to accommodate more use cases for the Tablet. The success of Microsoft’s Surface Pro 3 and now the lower-cost Surface 3 has opened the market for traditional PC vendors to sell larger screen-sized Windows Tablets to compete for PC replacement dollars. Additionally, 2-in-1 Tablets have gained market share as costs have come down, placing 10″ and 11″ Windows Tablets in the mid and low price tiers for mass market consumption.”

I think clamshell laptops — particularly MacBooks — still have plenty to offer, and the new 12-inch Retina MacBook is likely the shape of the future, but a larger-panel iPad appeals too. The ideal for me would probably be some sort of detachable/convertible device, and if Apple ever builds one of those, I imagine I’ll find it impossible to resist. In the meantime, I’ll be interested to see if the iPad Pro will offer enough extra over my iPad Air 2 at a price that tempts me to switch up, although I don’t anticipate that it will have a feature set that will make it a serious substitute candidate to replace my MacBook Air.