While they enjoyed respectively brief sales spikes with the release of the 12.9-inch iPad Pro last fall and a 9.7-inch iPad Pro variant this year, the much-hyped Pro models have failed to reignite iPad sales sustainably, with the Q2/2016 marking the tenth consecutive calendar quarter of declining iPad sales. Last week the global market research firm TrendForce reported that while Apple remained the top-selling tablet maker overall in Q2/16 shipping 9.95 million units in the quarter, that was still down 2.9 percent from the first quarter metric and a decline in units shipped of nine percent year-over-year from Q2/15.

Trendforce suggests that a lack of changes in appearance (eg: the 9.7-inch iPad Pro is visually almost identical with the year-and-a-half older iPad Air 2), combined with Apple’s high prices work against the iPad Pro series, noting in a press release that “Consumers do not see these devices as a good bargain,” and that while the 12.9-inch iPad Pro maintained strong sales momentum for two quarters, the the 9.7-inch model “lost its luster after just one quarter since its release” and observing that “on the whole, the Pro series did not help expand iPad shipments in the second quarter as expected.” Interestingly, Trendforce reports that the iPad model sustaining Apple’s overall Q2/16 tablet sales volume was the year-and-a-half older iPad Air 2, which captured consumer interest thanks to a price cut coinciding with the 9.7-inch iPad Pro release.

The International Data Corporation (IDC) released preliminary data from its second quarter 2016 Worldwide Quarterly Tablet Tracker report a day or two later, calculating that worldwide tablet shipments, inclusive of both slate tablets and detachable PC laptops, reached 38.7 million in the quarter – a 12.3% drop year-over-year, with the tablet market continuing to recede as vendors refocus their product lines and consumers postpone and upgrades purchases. 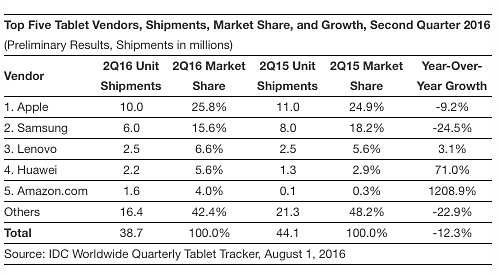 IDC observes that Apple’s launch of its second detachable (the 9.7-inch iPad Pro) helped lessen its year-over-year sales decline to 9%, but more importantly it helped raise Apple’s average selling price (ASP) and revenue. I don’t concur with IDC’s categorization ofAs with Trendforce, IDC says price reductions on previous generation iPads and the latest Pro iterations are expected to have the same effect for the remainder of 2016 as the consumer and enterprise audiences evaluate their needs. Personally, I don’t agree with IDC’s categorization of the iPad Pro — either size — as a PC detachable. It’s more a slate tablet attachable with an optional external keyboard.

According to new metrics from market researchers Canalys, while the worldwide tablet market fell an additional 16% in Q2 2016, as shipments dropped to their lowest point in three years, Apple managed to increase its share to 28% and remain at the top of the shrinking market.

“Microsoft’s Surface Pro and the iPad Pro have confirmed that there is a growing demand for detachable tablets in business,” observes Canalys Research Analyst TuanAnh Nguyen. “We are not going to see B2B demand propel tablet shipments to the heights of previous quarters. But the ongoing transition to Windows 10 and the arrival of multitasking in Android Nougat should provide an opportunity for vendors to capitalize on selling tablets and their associated services to businesses.”

It bears noting that Mac systems are not exactly flying off the shelves either. Apple announced last week that it sold 4.3 million Macs in calendar Q216 (Apple’s fiscal third quarter), representing an 11 percent decline year-over-year on the heels of a January-March quarter during which only 4 million Macs were sold – down 12 percent from Q1/15, and with Asus bumping Apple from the number 4 spot in overall PC shipments http://www.idc.com/getdoc.jsp?containerId=prUS41584116 according to market research firm IDC.

However, while Apple’s high prices are certainly a major factor inhibiting iPad sales to consumers, in my estimation Apple’s failure to substantially crack the power user sector with its iPad Pro models also can be attributed to Apple’s stubbornness and/or inability to provide it with a professional grade operating system that would satisfactorily support the needs of productivity-oriented users. In short, Apple’s protestations to the contrary notwithstanding, the iPad Pro — either size — is emphatically not the “ultimate replacement device for customers switching from PC notebooks.” Not without a visible, document based filesystem including ability to create and rename files at the document level, more flexible handling of image file uploads and downloads in particular, standard format I/O connectivity (a standard USB-C port would be nice), and multi-windowed multitasking. SplitView and SlideOver are a whole lot better than no multi-windowing, and can work quite well within its limitations, which are unfortunately many compared with real multi-windowing. One major deficiency is that not all of the apps I use for production support the split windowing, which is not Apple’s fault per se, but still frustrating.

And sorry, but the Apple Pencil stylus is not an adequate substitute for real mouse support, the latter which, since the iOS already supports Bluetooth keyboards, should be relatively simple to add, but Apple doggedly resists. Not cool.

If Apple wants to sell tablets with consumer grade operating systems and proprietary I/O connectivity, that’s fine, but they are not to be commended for trying to pass off the iOS as a fully satisfactory productivity OS because it’s not.

Note that I make these observations as an iPad Air 2 user who does a lot of basic production work on it, assisted by Dropbox which provides some document level support and keeps things in sync. with my Macs. However, there are crucial things I just can’t do on the iPad, and I don’t perceive the iPad Pro as addressing the deficiencies. I will probably eventually buy one, but my Air 2 is not yet two years old and I’m not anticipating a tablet upgrade until it passes the third year mark.

Another point impacting iPad sales, especially at the consumer level, is the “good enough” factor. For many users, the old iPad they already have is plenty capable of meeting their demands. For example, my wife and brother-in-law are planning to stick with their iPad 2s for the indefinite future, as is my wife’s friend with her original iPad mini and my daughter with her iPad mini 2.

Logically, growth potential for premium priced tablets like the iPad would appear to be mostly in the enterprise market, which makes Apple’s recent emphasis on “Pro” models an ostensibly logical strategy, but as noted what is still needed is for Apple to fix the show-stopper deficiencies in the iPad and iOS for power/productivity users.