The COVID-19 pandemic has caused many people to question how to properly disinfect their smartphones. Apple has gone so far as to publish a support page detailing how to clean each iPhone model, from the original iPhone to the newest iPhone 11 Pro Max. In response, numerous UV-based cleaning tools have appeared on the marketplace made specifically for disinfecting an iPhone using UV light.

But what about the Apple Watch? Enter the WatchSoap Charge-N-Clean Apple Watch Stand ($27.95 on Amazon). Similar to the Ultra-Violet light cleaners for smartphones, the Charge-N-Clean uses light to sanitize your Apple Watch while simultaneously charging it. Rather than using UV light which can damage some wrist bands, the Charge-N-Clean uses High-Intensity Narrow Spectrum (HINS) light. HINS light is absorbed by molecules within bacteria, producing a chemical reaction that kills the bacteria from the inside as if common household bleach had been released within the bacterial cells. 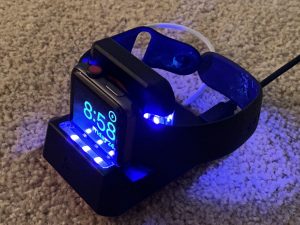 WatchSoap Charge-N-Clean uses 13 bulbs that emit HINS sterilizing rays onto the watch screen as well as onto the inside of the watch strap while its being charged. Simply attach your Apple Watch magnetic charger to the unit (charger not included), then use their included USB-C cable to plug the stand into a USB port or wall charger.

Developed by researchers at the University of Strathclyde in Glasgow, Scotland, HINS lighting technology decontaminates the air and exposed surfaces by bathing them in a narrow band of visible-light wavelengths centered on 405 nm, known as high-intensity narrow-spectrum (HINS) light.

Clinical trials at Glasgow Royal Infirmary have shown that the HINS-light environmental decontamination system (EDS) provides significantly greater reductions of bacterial pathogens in the environment than can be achieved by cleaning and disinfection alone.

According to John Anderson, microbiologist and lead researcher at Strathclyde, “The technology kills pathogens but is harmless to patients and staff, which means for the first time, hospitals can continuously disinfect wards and isolation rooms,” said Anderson. “The system works by using a narrow spectrum of visible-light wavelengths to excite molecules contained within bacteria. This in turn produces highly reactive chemical species that are lethal to bacteria such as meticillin-resistant Staphylococcus aureus, or MRSA, and Clostridium difficile, known as C. diff.” 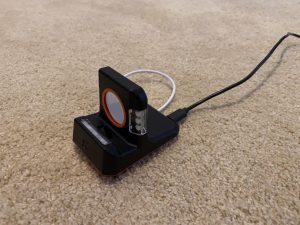 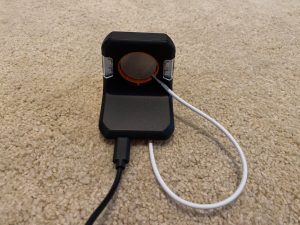 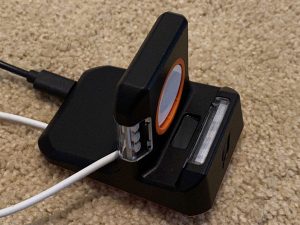 Once plugged in, the Charge-N-Stand will automatically illuminate for 40 minutes, killing 99.9% of germs. The lights are safe to eyes and skin, and no liquids or chemicals are used. According to the manufacturer, “Charge-N-Stand is specially designed to take care of delicate watch straps, such as Leather, Nylon bands, Fabric, Sport Loops.” The stand meets Photobiological Safety standard IEC62471 and “sterilizes your watch with 99.9% removal rate on bacteria including E.coli and S.aureus, Salmonella, and others. Performance verified by Centre Testing International 2020.” 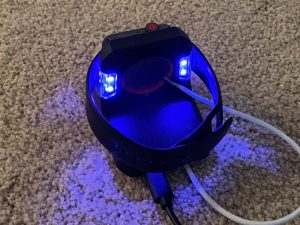 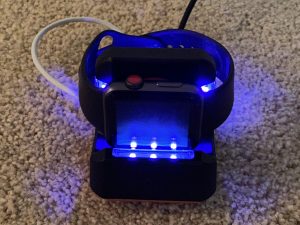 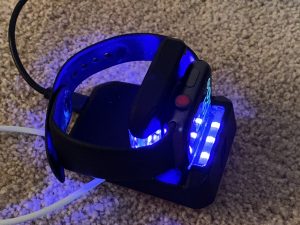 We tested the Charge-N-Stand with an Apple Watch Series 3 and can report that the product is well designed and easy to use. The HINS light rays cover the entirety of the watch face and inner part of the band, except where the magnetic charger actually attaches of course (see the pics above). The stand is compatible with 5W and faster wall chargers. After 40 minutes, the HINS lights go out and the stand continues to charge the watch.

The Charge-N-Stand might work best at night if you take off your Apple Watch before going to bed. In this case, the stand will charge and sterilize the watch each night. Use your watch the next day knowing it has been sterilized as well as fully charged.

Charge-N-Stand will ship starting September 2020 in Japan, followed by the US and other countries. Visit Charge-N-Clean.com for more information and current pricing.