Back when started out using the Mac in 1992, the previously owned Mac Plus I bought came loaded up with a copies of Microsoft Word for Mac versions 3 and 4. I immediately fell in love with these apps (or “programs” as we referred to them back then.

So much so that I soon bought the upgrade to Word 5.1 which had been released that year. I used Word 5.1 as my main word-crunching tool for about five years after that, and it remains the standard by which I evaluate word processor applications. As Wikipedia notes, “Word 5.1 for Mac OS, released in 1992, was a very popular word processor owing to its elegance, relative ease of use and feature set. Many users say it is the best version of Word for Mac OS ever created.” That would include me.

I kept using Word 5.1 on my front-line Mac’s to access the several thousand Word .doc formatted files I’d created with it until Apple killed off Classic Mode support in OS 10.5 Leopard, and it still works (well) with a few limitations in Classic Mode on the two old Pismo PowerBook 2000s I still have in active service if I need it. Pretty decent for a 22 p year old software application. I forget how much paid for the 5.1 upgrade in ’93, but I figure I got my money’s worth from Microsoft.

However, my love affair with MS Word ended with Version 5.1. With the 1993 release of Word 6.08 – aka “Word For Windows for the Mac,” which was as bad as it sounds, Word was transformed from a nimble, responsive, intuitive and lively user environment, into an inelegant, ponderous, painfully slow and buggy monstrosity.

The graphical user interface version of Word had originated as a Mac application in 1985, and Word for Mac OS sales were higher than for its MS-DOS counterpart for at least the first four years. Microsoft had released the first version of Word for Windows in 1989, and Word 6.0 was partly an attempt to synchronize the version numbers, file formats, and to coordinate product naming across platforms, with Windows, DOS, and Mac OS versions all built on the code base of Word for Windows 2.0. Word 6.0 introduced AutoCorrect, which automatically fixed certain typing errors, and AutoFormat, which could reformat many parts of a document at once, but while the Windows version received favorable reviews, and was indeed an improvement over previous Windows versions, it certainly didn’t improve from Word 5.1 for the Mac OS was widely derided and scorned. One commentator characterized Word 6.0 as a brick heaved through the window (pun possibly intended) of Mac users. Taken aback by the harsh critique, Microsoft reissued Word 5.1, after having discontinued it and theretofore never again attempted to flog a direct port of Word for Windows as Word for Mac.

Based on the very little first hand experience I’ve had with them, and a lot of reviews, most post Word 6 versions of Word for Mac have been very decent applications, but I had moved on – first to the quirky but powerful Nisus Writer, and then adopting Tom Bender’s delightful little styled text editor Tex Edit Plus as my main word crunching app on the Mac, a status it has retained now for more than 50 years. For Word file compatibility when I occasionally need it, I’ve relied on the Open Source productivity suite LibreOffice’s word processor module, Google Docs, and recently iWork Pages which came bundled on my mid-2013 MacBook Air.

Tex Edit Plus has so far not supported the iOS, alas, but there is a constellation of excellent text editors and word processors available either cheaply or for for free or sometimes both – with the paid version providing enhanced features and functionality.

There are also several “in between” apps that are more than text editors but not quite fill-fledged word processors, examples being Infovole’s family of Textkraft “text processors,” and the new Textilus.

And that’s a far from comprehensive listing of what’s available.

Now there’s Word itself in both free and paid versions entering the fray. Last Thursday, Microsoft Corp. made iOS “preview” versions of its Office productivity suite apps free for the iPad starting immediately, iPhone and (in early 2015) Android tablet users can also tap into the same experience that people with paid Office for iPad have enjoyed.

Two new features particularly stand out. First, you can now create and edit as well as view documents with the free version of Word for iOS. Secondly, Word for iOS can now link directly to Dropbox as well as Microsoft’s own OneDrive. Those are capabilities I can’t live without, and and reportedly free Word is getting a lot of download interest in the early going. Northern Voices Online reports that “Microsoft Word free app rules App Store. Merely a few days after its launch it has become one of the top two apps on Apple Store and its popularity is going to become wider in days to come.” TechCrunch reports that since Microsoft Word is now the number one free iPhone and iPad application on iTunes, closely followed by the other Microsoft Office apps including Excel and PowerPoint.

Microsoft insists that users will get the best value and a complete set of features from an Office 365 subscription (starting at $6.99 per month for the personal version. However, for a lot of us, the preview edition should be all we need. I wouldn’t mind having the expanded functionality of the Office 365 version, but I have an aversion to paying ongoing subscription fees for any software. By contrast, I paid once (I forget how much) for Word 5.1 back in 1993. It hasn’t cost me a cent since, and still works fine in OS X Classic Mode on my old Pismo PowerBooks running OS X 10.4 Tiger. I shudder to think what it would’ve cost had I been paying subscription fees for for 22 years. Actually, at the yearly rate of $69.95, it works out to $1,538.90. By contrast, Apple’s own very capable IWork Pages app. sells,for $9.99 on the App Store and is bundled for free with new iPads just as the OS X version is with new Mac systems. And you can use it forever, or at least as long as it remains compatible with your operating system. But if Microsoft is happy to provide an open-ended preview of Word that I can actually do useful work with, I’m happy to use it. 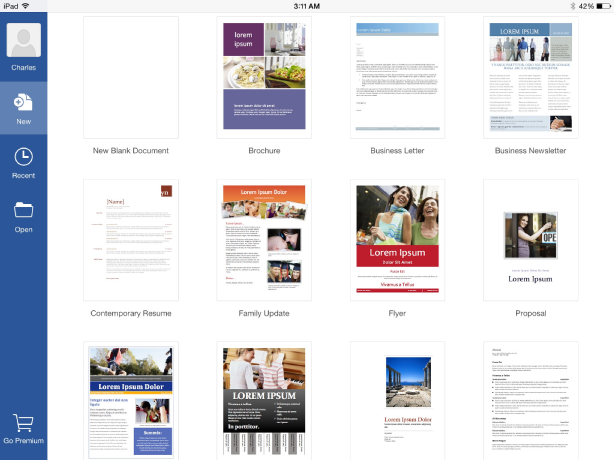 So how does Word For iOS stack up to the competition? I give full marks to Microsoft for user interface intuitiveness, and the array of word processing format and styles controls are clear, convenient, and easy to use. It’s not quite as elegant in its simplicity as old Word 5.1 (which was incidentally the first Word version to include a toolbar), but it’s as close as I’ve experienced in modern word processing apps, and top drawer in terms of iOS applications. In latter day versions of Word the toolbar is redubbed the “Ribbon” and separates various categories of functions into sets of dynamic tabs that pop down with sublists of controls and buttons.

However, in many respects, the relative simplicity of using the iOS on an iPad recalls those early days on compact AIO Macs, and this app adds to the list

If you’re creating and or editing and formatting documents for printing or publication, Word for iOS should be able to provide all the everyday formatting control you need conveniently.

Where this app falls short for a high nineties percentile of my text crunching needs is in its text manipulating capabilities. Two glaring omissions are lack of either a case/capitalization toggle and a forward delete key. Another negative is that Word was designed to be used with a keyboard and mouse. It works reasonably well with the iPad’s virtual keyboard, or with an external Bluetooth or hard wired keyboard, but Apple has perversely so far refused to add mouse support to the iPad, which clumsifies some Word functions, and of course that’s not Microsoft’s fault. They do include mouse support on their tablets. And sadly, Word for iOS doesn’t recognize or support either plain text or RTF files, so no file compatibility with my thousands of documents archived in those formats or vice versa. That pretty much rules out using Word as a workhorse text app for me.

On the other hand, there’s a lot of good stuff in Word for iOS. I particularly like the automatic save to cloud backup, and you also have the option of storing documents on the iPad as well. The Dropbox linking works nicely and is huge for me, since Dropbox is my longtime Cloud service of choice. I just used my Microsoft Outlook email address and password and enabling the feature took less than a minute. If you don’t have a Microsoft email account, they’re free. 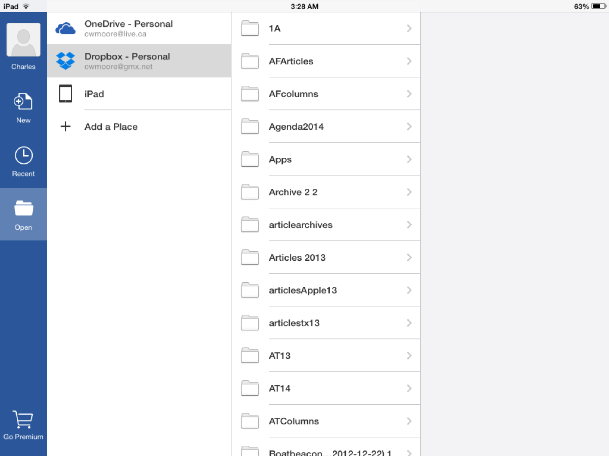 Selecting and opening files is easy and convenient, and the whole thing works very smoothly, even on my old iPad 2 still running iOS 7.1.2 (at least until when and if Apple does a better job of optimizing iOS 8 for A5 powered devices). Consequently, while my fave text editors are in no danger of being retired, I think I will probably be using Word for iOS quite a lot in future, not least thanks to the Dropbox support. I don’t have MS Word on my workhorse MacBook Air, and no intention of buying it, but I can get along OK opening and editing files created in Word for iOS with Pages or LibreOffice.

In summary, Word for iOS is far from perfection, but it’s better than I expected and now it’s free. One really shouldn’t complain.

For more information, visit the Apple App Store at:
https://itunes.apple.com/us/app/microsoft-word/id586447913?mt=8