Apple offers the two base M2 configurations listed above. Available custom options for each configuration include the following: 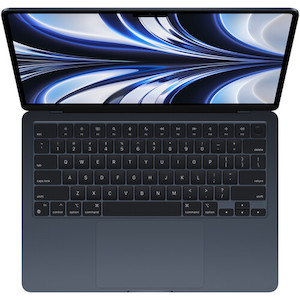 Apple today the 2022 13.6″ MacBook Air with an M2 Apple processor in June 2022. The new M2-powered MacBook Air features performance up to 40% faster than before. The laptop is similar in design to the new 14″ and 16″ MacBook Pros with thin bezels and a notch at the top of the display. The MacBook Air features a 13.6″ Liquid Retina display with 500 nits brightness and is a little thinner than before. It weighs only 2 points. The Air has 2 thunderbolt ports, an audio jack, 1080p camera, 4 speaker sound system with Spatial Audio, and a Touch ID-enabled Magic Keyboard.

READ OUR MOST RECENT REVIEW OF THE M2 MACBOOK AIRS.

Apple offers the two base M1 configurations listed above. Available custom options for each configuration include the following: 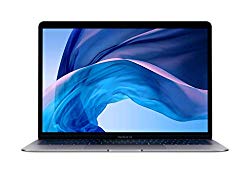 Apple’s November 2020 update to the MacBook Air lineup introduces the M1 Apple Silicon CPU with a huge boost in power and battery life.

READ OUR MOST RECENT REVIEW OF THE M1 MACBOOK AIRS.

Apple introduced new and redesigned 13″ MacBook Airs in October 2018 with 1.6GHz dual-core Intel Core i5 Dual-Core 8th generation processors. The new design is slimmer and lighter than previous models and introduces a Retina dislay in the MacBook Air for the first time. The new model features a narrow black glass bezel, wedge shape similar to the 12″ MacBook, force touch trackpad, and third-generation Butterfly keyboard. A Touch ID sensor is included for the first time on the MacBook Air. An eighth generation Intel Dual-Core i5 processor is standard along with up to 16GB of memory and up to 1.5TB SSD storage. Two USB C/Thunderbolt 3 ports are available

The 2016 13-inch MacBook Air feature fifth generation Intel Core processors up to 2.2 GHz, with Turbo Boost speeds up to 3.2 GHz, integrated Intel HD Graphics 6000, and Thunderbolt 2, delivering up to 20Gbps, twice the bandwidth of the previous generation. The 13-inch MacBook Air also features faster flash storage that Apple claims is up to two times faster than the previous generations.

2015 MacBook Airs
What Does The Refreshed 12-Inch MacBook Tell Us About Coming MacBook Pro Upgrades?
Will Zero-Travel Virtual Keys Be The Next Phase In Apple’s Laptop Keyboard Evolution?
Should you Give Your Aging MacBook A New Lease On Life As A Chromebook?
Why Apple Still Sells An Eight-Year-Old Design Laptop
What Does Apple Have Cooking In Laptops For 2016?
New MacBook Air 13-Inch and 15-Inch Rumored For WWDC 2016
13-Inch Haswell MacBook Air At Two Years
The Future Of MacBooks: Thin, Light, (And Detachable?)
Original Aluminum MacBook – My Best Mac Ever?
Is The New 12-Inch MacBook The Do-All Device For Mobile Productivity?
Mac Notebook Evolution; A Desktop Replacement Memoir