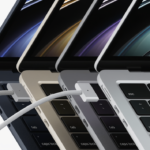 Apple today introduced the 2022 13.6″ MacBook Air with an M2 Apple processor. Apple’s second-generation Apple Silicon processor, the M2 CPU, is a 5nm CPU with 20 billion transistors, 100GB/S unified bandwidth memory, and 8-core CPU with 18% greater performance than M1. Up to 24GB unified memory is supported. The GPU is a 10-core GPU with 25% higher graphics performance than the M1.

The new M2-powered MacBook Air features performance up to 40% faster than before. The laptop is similar in design to the new 14″ and 16″ MacBook Pros with thin bezels and a notch at the top of the display. The MacBook Air features a 13.6″ Liquid Retina display with 500 nits brightness and is a little thinner than before. It weighs only 2 points. The Air has 2 thunderbolt ports, an audio jack, 1080p camera, 4 speaker sound system with Spatial Audio, and a Touch ID-enabled Magic Keyboard. A compact power adapter with two USC-C ports is included and a fast charger is available.

The M2 MacBook Air will start at $1199 and be available in Space Gray, Silver, Blue and Gold colors.

Orders will be available at Apple for both laptops in July 2022.

Finally, Apple will keep the M1 MacBook Air in their lineup starting at $999.