A new double-blinded scientific study published in the journal Proceedings of the National Academy of Science has determined that reading in bed, or even before going to bed, using backlit electronic screens, really does a number on the quality of sleep you get, resulting in a constellation of unwelcome effects including prolongation of the amount of the time it takes to fall asleep, disrupting your circadian clock, suppressing levels of the sleep-promoter hormone melatonin, reducing the frequency and delaying the cyclic timing (ie: shortened duration) of REM sleep, with a consequent reduction in alertness upon arising the following morning.

Reading on these light-emitting devices also tends to keep you wider awake at the time, possibly influencing users to delay going to bed, likely resulting in their getting less sleep overall.

Lead author of the PNAS study, entitled “Evening use of light-emitting eReaders negatively affects sleep, circadian timing, and next-morning alertness”, is Anne-Marie Chang, a neuroscientist at the Division of Sleep and Circadian Disorders in the Departments of Medicine and Neurology at Brigham and Women’s Hospital and the Division of Sleep Medicine at Harvard Medical School, both in Boston, Massachusetts. Co-authors are Jeanne F. Duffy and Charles A. Czeisler — of those same institutions, and their colleague Daniel Aeschbach, who is also affiliated with the Institute of Aerospace Medicine at the German Aerospace Center in Cologne, Germany.

The researchers report finding that use of handheld light-emitting devices immediately prior to bedtime produces biological effects that may exacerbate and perpetuate the increasingly common 21st-Century problem of sleep deficiency in developed societies, which, along with disruption of circadian rhythms, may adversely impact a person’s performance, health, and safety.

They note that over the past five decades there has been a decline in both duration and quality of the average person’s sleep, with concomitant adverse general health consequences. The coauthors cite a recent survey of 1,508 adult Americans finding that 90 percent of Americans use some type of electronic device at least a few nights per week within an hour of retiring, and evidence mounting from America and other countries around the world of the negative impact of backlit technology’s use on sleep.

As to why, there are several possibilities. One might be that the short-wavelength-enriched light emitted by these backlit devices, which has been shown in scientific experimentation to induce enhanced alertness, cause melatonin suppression, and to phase-shift late-night electronic device users’ biological clocks.

However, they note that little is known about short wavelength light’s effects on circadian phase and subsequent sleep, representing a substantial gap in scientific knowledge of how this attribute of the technology affects sleep.

In their paper, the researchers compare biological effects of reading an e-book on an iPad with reading an ink-on-paper book in the interval immediately before bedtime. Participants presented with the symptoms outlined above with greater frequency and intensity when reading eBooks on light-emitting devices than when reading printed material.

Personally, I’ve intuitively arrived at a similar conclusion, although I can’t say I always scrupulously avoid screen time within an hour of sleep time. However, while I do a lot of reading online for work-related research, and a fair bit of it in the evening most days, I don’t like reading anything long form, or reading for pleasure and relaxation off electronic screens, which is why I continue to subscribe to three hard copy magazines and daily newspaper on newsprint, and prefer ink-on-paper books to e-books even though print is more expensive on all counts than the electronic alternatives.

I do succeed in managing to almost always switch for least a few minutes to reading something in print before hitting the pillow, and magazines have the added advantage of not being susceptible to damage if I fall asleep and they slip out of my hand to land on the floor — something that has happened several times to my longsuffering iPad 2, fortunately with no serious consequences, but I wonder about my new iPad Air 2 with its thinner-section panel and less robust enclosure.

Actually, I haven’t experienced any notable difficulty or lag in falling asleep, and indeed the contrary typically applies, my tendency being to nod off with a screen in front of me, which can happen at any time of day, and I’m usually out like a light as soon as my head hits the pillow most nights. However that doesn’t necessarily mean my sleep quality is ideal.

If I ever did want to read, say, a full-length novel in e-book form, I wouldn’t choose my iPad as a platform, but rather a non-backlit device like my wife’s original Kindle with its much gentler on the eyes E-Ink display. I know it won’t happen, but I would love it if Apple (or somebody) released a full-featured tablet computer with an E-Ink display. Just fantasizing. 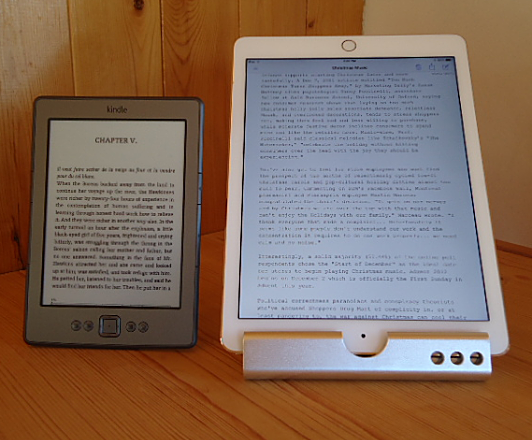 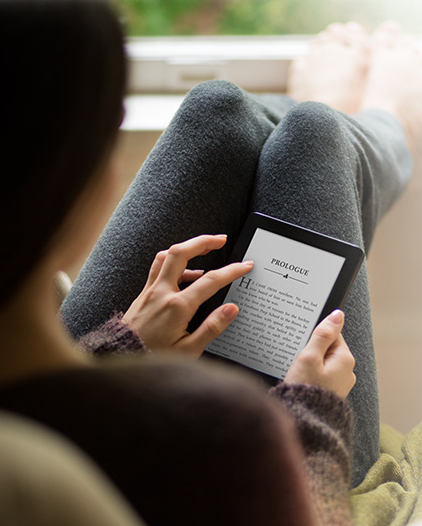 Incidentally, in an interview with VOX’s Susannah Locke, Dr.Chang says she presumes that reading on a non-backlit Kindle or similar E-ink device would be no different in the context investigated in the study than reading a printed book, but that the research team didn’t test that.