One reason I’ve been a longtme laptop and iPad aficionado is that I live in a rural area of eastern Nova Scotia where power blackouts are not uncommon any time of the year, especially in the fall when at least the remnants — sometimes more — of Atlantic hurricanes track up the eastern seaboard with their sights on us. Last week it was a combination of moist tropical energy from the tail end of Hurricane Matthew and a major cold front dropping down from the Great Lakes that knocked us off the grid for four days due to damage caused by storm-force winds and nearly nine inches of rain in one day reported in some parts of the province.

We were fortunate and got less than half that amount locally, but still got plenty of water dumped on us over a short time causing road washouts. Happily we sustained no major property damage — unlike people in other parts of Nova Scotia where the flash flood damage resembles what Matthew did to Florida and the Carolinas. Repair crews were overwhelmed, and while the power problem at our house turned out to be just a blown transformer fuse that took only a few minutes to replace once the bucket truck got here, it was just short of four days in arriving.

Except for having no hot water for showering after the first day, we weren’t terribly uncomfortable, as we have a gravity-fed water supply, and wood stoves that we can cook on as well as supplementing with a propane camp stove. Our 3,000 watt gas generator kept the refrigerator and freezer running, along with some lights, the TV, and it also powered up our Satellite Internet dish and modem and WIFI router. 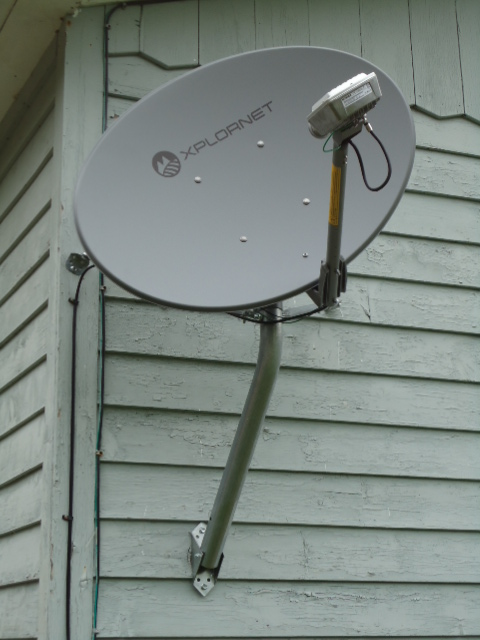 When I switched from terrestrial based wireless to a satellite Internet service in 2014, a major factor in the decision was potential for weathering just such lengthy power outages without a service interruption. Last week it paid off big time. While the satellite service is somewhat more expensive and slower than the terrestrial wireless ISP (the only available alternatives in this neck of the woods), the reliability factor is a major advantage, especially for someone like me whose livelihood is conducted largely online.

I had been reasonably satisfied with the performance I got from the wireless service when I was a customer. Although it was not particularly speedy either, my biggest complaint was reliability. The wireless towers are vulnerable to lightning strikes and other adverse weather events, and get knocked out by power outages since they have no backup power supply of their own for when the main utility goes offline. This issue not only affected us for local outages, but because the wireless towers are daisy-chained, and we’re at the outer reaches of the network with many relay towers between us and the head end, power outages anywhere upstream, even if we’re not locally blacked out, will interrupt service here, something that had happened too often over the previous five years, with the longest such interruption we experienced being five days due to an issue with the local tower requiring a pole climb to fix it, and a winter weather delay.

In the sparsely populated rural area where I live there are no cable Internet, DSL, fiber optics, or HSPA services available, or likely to become so in the foreseeable future. Our satellite Internet Service Provider, Xplornet, which is affiliated with the HughesNet satellite network, costs about 20-25 percent more per month than I had been paying for the tower-based wireless service, but in terms of reliability I figured that being able to power up the dish and its modem and my WIFI router with our gas generator to get back online without waiting for grid and wireless network restoration justifies the higher cost.

I’ve been very pleased with the satellite service’s reliability in general, although heavy rain or snowfall will knock it out temporarily during the active precipitation. Annoying when it happens, but temporary and self-resolving. The local Xplornet rep. says this should not happen, but it does, which may have something to do with a hill and proximity of forest to our southwest, the direction the dish is aimed.

According to Wikipedia, satellite communications are inherently affected by moisture and various forms of precipitation (EG: rain or snow) in the signal path between end users or ground stations and the satellite being utilized. This interference with the signal is known as rain fade. The effects are less pronounced on the lower frequency ‘L’ and ‘C’ bands, but can become quite severe on the higher frequency ‘Ku’ and ‘Ka’ band. The Xplornet service uses the Ka band. 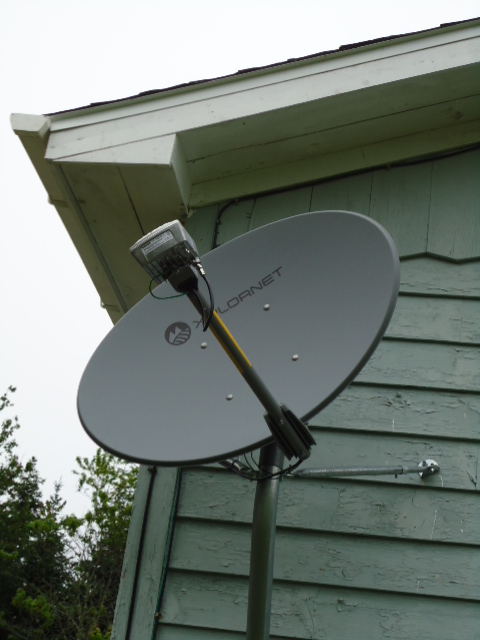 Wikipedia also notes that typically a completely clear line of sight between the dish and the satellite is required for the system to work, because in addition to the signal being susceptible to absorption and scattering by moisture, it is similarly impacted by presence of trees and other vegetation in the path of the signal. As the radio frequency decreases, to below 900 MHz, penetration through vegetation increases, but most satellite communications operate above 2 GHz making them sensitive to even minor obstructions such as tree foliage. A dish installation in the winter months must factor in plant foliage growth that will appear in the spring and summer. Interestingly, a combination of foliage and rainfall had been a problem with our wireless broadband here until they installed another tower giving us an unobstructed line of sight to the tower antenna. Dry leaves were OK but rain would knock us out. Not an issue in winter.

The Satellite package I’m signed up for provides nominal 5.0 Mbps download speed and a monthly bandwidth allowance of 50 GB, which has been so far more than adequate for our needs, with our usage running about 20-25 percent of the monthly allowance.

The other significant shortcoming of satellite broadband is latency. The wireless tower we’d been connecting with is less than three miles away in a straight shot over mostly water, but the dish antenna now mounted on the southwest corner of my house has to communicate with a satellite in geo-stationary orbit 22,236 miles above the equator,and since I’m located on the 45th Parallel, the actual distance that communications handshaking has to travel is much farther than that, which imposes what is called latency lag. Once the data start flowing, it’s reasonably speedy, but the initial hesitancy is an inherent characteristic of satellite Internet. The round trip latency of a geostationary satellite communication’s network is roughly 20 times that of a terrestrial based network.

Nevertheless, I remain satisfied with satellite Internet as an alternative for rural outliers. The rain fade caveat notwithstanding, the network reliability worth trading a bit of speed for.

While I’m at it, another point noted during the four-day power blackout was that turning down the screen brightness in the iPad and MacBook Air had a substantial payoff in longer battery charge life.