The personal computer multiverse is in a state of flux and turmoil these days. The once dominant desktop is now a niche product. Windows laptops makers are trying a variety of approaches as exemplified by Dell’s touchscreen XPS 13, the HP Spectre 13, and Lenovo’s Yoga hybrid; Microsoft is cruising the hybrid route with its Surface Pro and Surface Book models; Google advocates simplifying our lives and saving money by using Chromebooks while Apple has gone off on a tangent with the quirky Touch Bar, do-all USB-C ports replacing all I/O legacy ports save for the 3.5 mm audio port, and a keyboard many find uncomfortable for long form typing, and the iPad is still trying to figure out what it wants to be when it grows up.

While late 2016 MacBook Pro sales with and without Touch Bar have been reasonably robust, partly due to pent-up demand for something new in laptops from Apple, overall Mac system sales dropped it to fifth overall in 2016 shipments, relinquishing fourth place to Asus, although clawing it back in the fourth quarter according to data compiled by market research firm IDC.

Microsoft has been bragging non-specifically that Windows PCs have been outselling MacBooks in the premium priced category that Apple once virtually owned. “And Microsoft says that Apple fans disappointed over the newest MacBook Pro are leaving Macs behind entirely and coming over to its Surface devices,” notes Business Insider’s Matt Weinberger. Then there’s the iPad, with sales down 22 percent year-over-year in Apple’s first 2017 fiscal quarter, perhaps losing sales of Pro models to the Surface and other Windows tablets.

Surer at MSPowerUser contends that the new Macbook Pro is a result of Apple “taking its eye off the ball,” with USB-C’s wholesale displacement of I/O ports that people actually need and use an example of what he calls Apple’s “dongle-hell” obsession.

Meanwhile, Business Insider’s Kif Leswing observes that some of Apple’s biggest fans have felt obliged to buy ‘pathetic’ and ‘old’ Macs from 2013 because the company doesn’t offer desktop and laptops to suit their needs. Personally, I dialed that back to a 2010 design, buying a 13-inch MacBook Air a couple of weeks after the new MacBook Pros were unveiled last fall. I don’t consider the MacBook Air pathetic. It’s a nice computer that does what I need it to do despite its antiquity in personal computer terms. “And Microsoft says that Apple fans disappointed over the newest MacBook Pro are leaving Macs behind entirely and coming over to its Surface devices,” Weinberger adds.

There is enough disappointment and disaffection with the latest macOS system hardware that it has set some on a quest to find a viable alternative. New Atlas’s Will Shanklin notes that “With the 2016 MacBook Pro, Apple left some of its most loyal customers in the dark. Making the company’s pro-tier laptop lighter and thinner was a welcome move, but the model’s higher price, weaker port selection and less-than-essential Touch Bar were anything but.” Shanklin suggests several alternative options” for those ready to give up on Apple’s highest-end laptop line.

Microsoft‘s CFO Amy Hood is cited saying during a webcast discussing the company’s Fiscal 2017 second quarter earnings for the quarter ended December 31, 2016 that disappointment with the new MacBook Pros has resulted in Windows OEMs making gains on Apple in premium laptop sales.

Of course macOS, Windows, and Chrome, while overwhelmingly dominant, are not the only OS platforms in play. A Spanish laptop retailer firm called Slimbook in cooperation with KDE Linux, is marketing a line of 13.3-inch Intel Skylake Core i5 and i7 powered laptops that owe a lot to the MacBook Air in terms of styling, but are designed to run the KDE Linux OS. 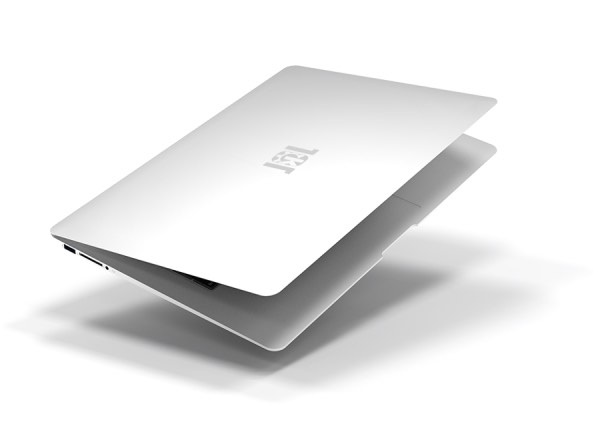 Many years ago I installed a couple of Linux distros on an Apple WallStreet PowerBook. It was a somewhat tedious procedure for a non-geek, and while it was an interesting exercise, the results didn’t convince or even tempt me to abandon the Mac OS as it was known then. However, Linux today offers a much more refined and user-friendly alternative to the macOS, than did those late-’90s distros, especially for users mainly interested in productivity.

Late last year Slimbook approached KDE with the idea of offering KDE-branded laptops that come pre-installed with Plasma and KDE Applications. KDE says they were excited about the idea, and put their designers and developers to work creating a branding such a device and making sure that KDE neon runs without any hardware-related issues on it.

KDE’s Thomas Pfeiffer explains in a release that the KDE Slimbook allows them to offer their users a laptop that has been tested directly by KDE developers, on the exact same hardware and software configuration that users get, enabling potential hardware-related issues to be ironed out before a new version of their software ships, providing users an ideal way to experience KDE’s software, as well as increasing its reach. The KDE Slimbook is designed to offer the best KDE experience from a selection of ready distributions to use on the device.

Also last year, Ubuntu Linux based KDE neon joined the KDE community, giving them more control over the operating system layer, although the software will still be available for other Linux distributions or operating systems.

KDE neon is described as an intersection of stable long-term LInux release as its core that packages “the hottest software fresh from the KDE Community ovens,” and what is claimed to be “the world’s most customizable desktop.” KDE neon is recommended if you want the latest and greatest from the KDE community combined with the safety and stability of a Long Term Support release, with no need to worry about “strange core mechanics” and just enabling you to get things done when you want your computer as a production tool you can trust to deliver “day after day, week after week, year after year. Here it is: now get stuff done.”

The Slimbook folks say they were not content with the quality of laptops available on the market, noting that the majority ship with proprietary and locked-in software solutions, filled with not-uninstallable bloatware and leaving the user at the mercy of whatever the laptop vendor sees fit for them to work with.

“As creators and makers we knew what it meant to be locked into a set of solutions defined by others. Many alternatives took whatever hardware they could find when they wanted to provide more free options and the end result was often lackluster and as such, lowering the enjoyment in using the computer, our main tool in creating, and shipping with underwhelming specs, ” they observe. “We saw a problem, and we solved it: The KDE Slimbook.

“With the KDE Slimbook the KDE Community, in cooperation with Slimbook, takes a new leap in providing us all — users and creators alike — with a safe, private and productive experience,” say the KDE team. We combined the productive environment of Plasma, KDE applications, the technological advances in KDE Frameworks and the agile pace of KDE software releases with the Slimbook hardware in a unique cooperation to bring you the KDE Slimbook. We didn’t make it just for you — we made it for us. A laptop that we, as creators and makers, lacked. A machine that ships with us in mind. Private from the first boot, secure for all users and where productivity is its main focus. A machine for creators.”

And for MacBook Pro refugees? It’s an intriguing concept.

The two aluminum chassis Slimbook models are powered by Intel i5 and i7 6th generation Core processors (Skylake) respectively.