Today’s more powerful and larger-screened smartphones and phablets are becoming the default anchor computing device for more and more users computing devices, but even a five or six inch panel is not really adequate as a platform for getting serious work done if there’s a larger-screen alternative at hand. But what if there were a way to leverage the fact that iPhones and other smartphones now pack more computing power than did desktop tower Macs and PCs of not so long ago? A way to enlist one’s phone as a digital hub for all, or at least most, of a user’s computing activities, but with an expanded capabilities when using it at home or office?

Back in the early days of Mac portable computing, from 1992 until 1997, Apple offered a modular personal computing system called PowerBook Duo with its hub a dockable sub-notebook designed to be used at home or office with a desktop docking station. Over its five year production run, the PowerBook Duo was eventually sold in seven different models — the 68K powered Duo 210, 230, 250, 270c, 280, and 280c, and the PowerPC 603 powered Duo2300.

The way the original Duo concept was intended to work was for the portable module to function as a normal laptop computer in its mobile mode, but upon return to home or office it could be inserted into a Duo-Dock with a full-size CRT monitor, a full set of I/O ports, a floppy drive, an internal hard drive, and two internal NuBus expansion slots, with the notebook serving as a CPU and main hard drive module and have the composite rig function as a desktop computer with an external keyboard and mouse. The large (by the day’s standards) monitor was a particularly attractive Duo feature in the days before larger, higher-resolution active-matrix color laptop monitors.

Later there were also smaller, portable minidocks that could plug into the 152-pin Duo connector, providing a set of standard ports and a connector for an external floppy drive. Duos, Apple’s longest-serving laptop form factor of the ’90s, were eventually built with Motorola 68020, ‘030 and ‘040, and 603e PowerPC chips. The PPC Duo 2300, introduced in May, 1994, was the last of the line, and Apple dropped the dockable Duo concept in May, 1997, replacing it with the PowerBook 2400c subnotebook.

I always thought the Duo was a really cool, truly innovative idea, but the concept’s true potential was never fully realized due to the fact that the Duo laptop modules, while small for laptops in a mid-’90s context, were at over four pounds and nearly an inch and a half thick, were still too big and heavy to pack around conveniently, and most of the processor silicon they packed was second or third-tier at best power-wise. The Duo laptop’s 9-inch screen was smaller than today’s mid-size iPad panel and had much lower 4-bit 640×400 resolution. Laptop hard disk drives were small and slow, and PowerBook Duo systems were dauntingly expensive.For example, the PowerBook Duo 2300 sold for $3500 to $4500 depending on configuration, and the Duo Dock Plus cost $900. Unsurprisingly, the PowerBook Duo was never a big seller, and was quietly discontinued in 1997.

However, the modular form factor with a portable core concept has always appealed to me in theory, and arguably a dockable smartphone as core computing device hub would have better potential for success than did those old Duo laptops of the ’90s. 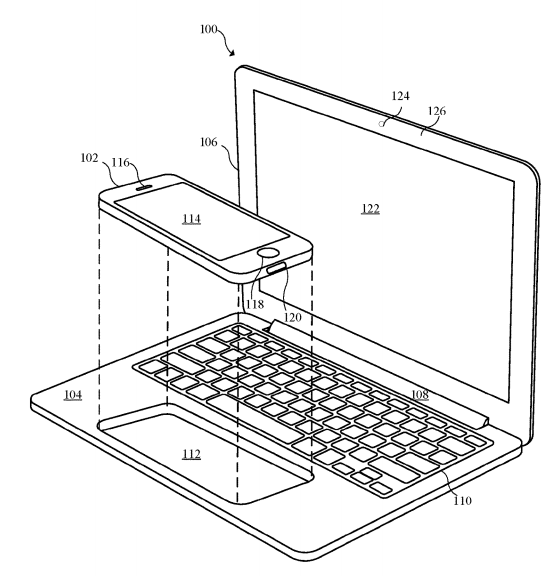 In short, it sounds awfully like the old PowerBook Duo concept updated for the 21st-Century, only downsized with a handheld device as its operational core, and a notebook computer form factor providing the dock function. Only this time with a powerful iPhone as its hub, a Duo redivides would have much greater prospects for success, although it would probably be more bad news for iPads.

An iPhone Duo would also share the iPad handicap of the iOS’s shortcomings and limitations in the context of serving as a fully satisfactory Mac substitute. It’s also unclear as to whether the clamshell dock housing’s display panel would be a touchscreen, or the in situ iPhone’s screen and the housing’s trackpad would have to suffice. External mouse support would presumably not be provided unless Apple has a change of heart and finally adds input device Bluetooth support to the iOS. A notebook style dock would also have plenty of room for 1/0 ports — preferably USB-C — and additional battery capacity. 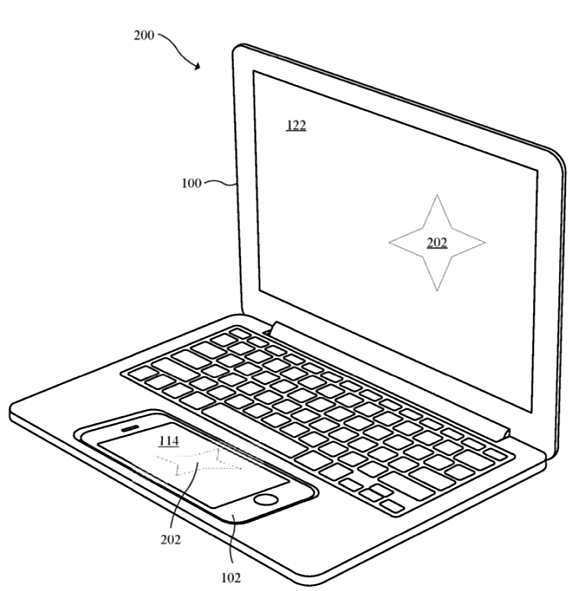 Some of those points appear to be addressed in the patent application, which mentions in its summary that the accessory device can have “a form factor corresponding to a laptop computer and as such can include data output resources such as a visual display and input resources such as a keyboard,” and can also include memory resources as well as including “a port having a connection mechanism arranged to facilitate a communication channel between the accessory device and a host device (iPhone).

So will Apple revive the old PowerBook Duo concept with a new iPhone based docking system? I would love to see it happen, although Apple files lots of patent applications and relatively few reach production and sale. At least they’e more than just thinking about it. Conceptually, a Duo docking device using an iPhone as its hub makes a lot more sense than the original PowerBook Duo did, and would be a way for iPhone users to realize a lot more value from these increasingly expensive devices provided the cost of the dock module was reasonable.