Veteran tech journalist Jason Snell says a recent column he wrote for Six Colors recommending his picks for the best Mac notebooks to buy for students generated a lot of feedback from readers wondering why he didn’t include Apple’s most inexpensive MacBook model, the MacBook Air.

In a follow-up column, Snell explains that while he acknowledges that the MacBook Air has been a huge seller and is a light, capable laptop at a reasonable price, it’s a holdover from the past that’s only still around because it’s relatively inexpensive and Apple needs a price leader notebook. Snell points out that the MacBook Air received its last substantive update two years ago when it got Intel’s fifth-generation Core i Broadwell processor, which is now two full generations behind the Kaby Lake family processors in the current MacBook and MacBook Pro. A very mild refresh in June bumped the clock speed slightly to 1.8-2.2 GHz, but the CPU is still Broadwell, meaning that in four years a MacBook Air bought new today will effectively be six years out of date. Consequently, Snell is sticking with his recommendation that students or anyone shopping for a lower-priced Mac notebook check out what’s available in current MacBook and MacBook Pro (non-Touchbar) models at the online Apple Store’s Certified Refurbished page.

The thing is, for many users it’s not all about processor power, and the October 2016 and later MacBooks and MacBook Pros have some drawbacks too, including a keyboard many people find uncomfortable and noisy, except for a 3.5 mm headphone jack USB-C ports only for connectivity including charging (just one of them in the MacBook and two in the non-TouchBar Pro), that will make purchase of likely several adapter dongles obligatory for many users.

The MacBook Air by contrast has two standard USB 3 ports, a Thunderbolt 2 port, Apple’s brilliant MagSafe 2 charge port that has alas been abandoned in the USB-C machines, a SDXC card expansion slot, a 3.5 mm headphone jack, and one of the best keyboards Apple ever put in a notebook. 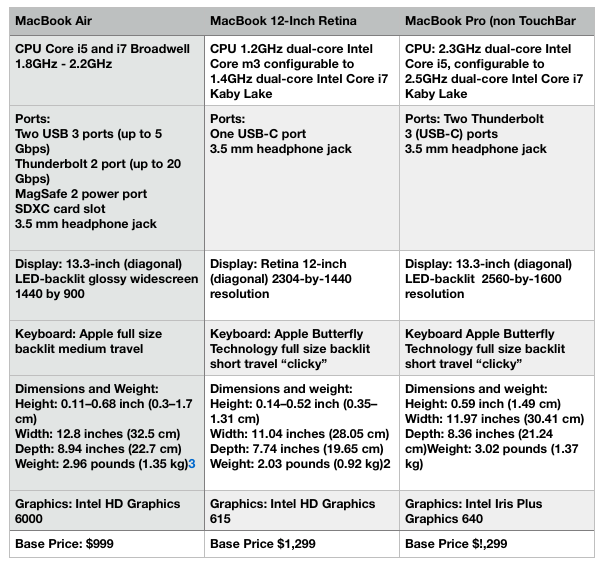 Aside from more processor power, the most compelling case for Apple’s recent notebook models is their high-resolution Retina displays versus the MacBook Air’s concededly throwback 1400×900 resolution 13.3-inch panel. Snell observes that users who want to watch videos, T.V. and movies on their laptop will “absolutely be disappointed” with the MacBook Air’s display, which Snell maintains is the Air’s biggest liability, and I don’t disagree.

I have two 13-inch MacBook Airs — a mid-2015 Broadwell model (purchased in November 2016), and a mid-2013 Haswell unit. I don’t watch a lot of video on my laptops and have an iPad Air 2 with a Retina display, but avid video watchers should probably go with a Retina display MacBook or MacBook Pro. However, my MacBook Airs are among the best, if not the best Apple computers I’ve owned in my more than a quarter century as a Mac user.

For the stuff I do on my laptops, I find my MacBook Airs — especially the Broadwell unit — more than satisfactorily peppy. Snell notes that he has edited podcasts with a half-dozen tracks of uncompressed audio on his 2015 vintage 11-inch MacBook Air, and while he might not want to routinely edit video on a MacBook Air, beyond that, it feels like it can do about anything.

There are other considerations including little ones like the non-illuminating Apple logos on the current MacBooks and MacBook Pros. I bought the Broadwell Air in direct response to the late-2016 MacBook Pro unveiling, guessing — correctly it seems — that it could be the last opportunity to buy a classic Mac notebook. I missed this year’s clock speed bump, but it doesn’t look like the MacBook Air will be around much longer, and won’t ever get a Retina display, USB-C, or a Kaby Lake processor.

Jason Snell is right that if those things are important to you, then you’re obviously better off with one of the current MacBooks or MacBook Pros. However, the latest Broadwell Airs at $999 are still worthy of serious consideration, and in my estimation a much better value than for instance a refurbished April 2016 12-inch MacBook with a poky 1.1GHz Intel Core m3 CPU for $1,019 which is the closest in price ACR unit I could find.

As always, there is no solution that will be the right choice for everyone. The current USB-C notebooks represent the future, at least as Apple perceives it. However, don’t sell the old MacBook Air short, especially if you can live with the low-res display and value classic Mac notebook attributes like a great keyboard, MagSafe, current mainstream USB-3 and Thunderbolt ports, and SDCard expansion. It almost surely is the last of the classic Mac notebooks and as such a piece of history.