Apple today introduced the new 2018 iPad Pro family. The new models feature edge-to-edge Liquid Retina displays, similar to those found in the iPhone Xr, in 11″ and 12.9″ sizes with rounded corners. The new iPad Pros are thinner than the older models by as much as 15%, and the physical home buttons have been removed.

Each iPad Pro now comes with Apple’s A12X Bionic chip featuring an 8-Core CPU and 7-Core GPU which Apple claims is faster than any CPU available on competitor’s laptops or tablets. 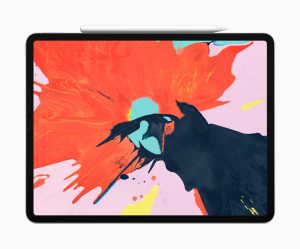 USB-C replaces the lightening connector, allowing connections to multiple accessories and also allows charging out…meaning you can charge your iPhone from your iPad. A second generation Apple Pencils snaps to the side of the iPad Pro magnetically and charges wirelessly.

Available storage options will include 64GB, 256GB, 512GB, and 1TB. The 11″ models will start at $799, while 12.9″ iPad Pro will be available from $999. Silver and Space Gray colors are available as well as LTE enabled versions. The previous-generation 10.5″ iPad Pros will remain available starting at $649. Order today at Apple for deliveries starting on November 7th.