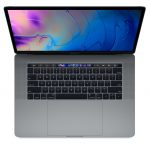 13″ Quad-Core Touch Bar MacBook Pros were updated with 8th generation 2.4GHz i5 CPUs, up from 2.3GHz.