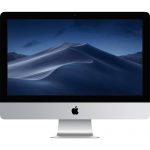 Apple today released updated versions of their 27″ iMacs featuring 10th generation Intel processors, SSDs across the board, a better 5K display, and improvements to the camera, speakers, and mic.

According to Apple, “By far the most powerful and capable iMac ever, it features faster Intel processors up to 10 cores, double the memory capacity, next-generation AMD graphics, superfast SSDs across the line with four times the storage capacity, a new nano-texture glass option for an even more stunning Retina 5K display, a 1080p FaceTime HD camera, higher fidelity speakers, and studio-quality mics. For the consumer using their iMac all day, every day, to the aspiring creative looking for inspiration, to the serious pro pushing the limits of their creativity, the new 27-inch iMac delivers the ultimate desktop experience that is now better in every way.”

Price points and base configurations are similar to previous models:

All three models are in stock today at Apple. Build-to-order options range up to 3.6GHz 10-core CPUs, 128GB RAM, 8TB SSDs, and 16GB of video memory.

Apple also released minor updates to the 21″ iMac and iMac Pro: “Apple today also announced that its 21.5-inch iMac will come standard with SSDs across the line for the first time. Customers can also choose to configure their 21.5-inch iMac with a Fusion Drive.

We’ll be updating our iMac Price Tracker with the latest prices and deals on these new models as information comes in from Apple and its resellers.