Over the past several months, I’ve been gloomily watching free capacity on the 16 GB flash drive in my iPad 2 shrink toward 2 GB, which seems to me a comfortable minimum. I had been hoping to get by for a few more years on a newer 16 GB iPad, but the prospect of having to pony up the extra hundred bucks for a 32 GB machine has lately seemed more and more an unavoidable necessity.

I don’t have a large music collection, have no videos or movies downloaded onto the iPad, don’t do high-end graphics or video editing, and I’ve been deleting apps that I don’t find especially useful, but that has no more than been holding the line, and defenestrating apps is a limited resource at best. When free capacity began dipping as low as 1.6/1.7 GB, the proverbial writing seemed to be on the wall.

Funny thing was, for the longest time I was able to maintain a free capacity of some 7-8 GB without really trying. Then around the time I upgraded to iOS 7, free capacity began to shrink radically into the 2 GB neighborhood. I hypothesized Retina optimization of more and more apps since March, 2012 had been a factor.

Anyway, recently while browsing through my app collection for more titles to cull, I happened across a little utility app called iDelete that I’d downloaded last summer, but had forgotten about and never gotten around to trying out.

iDelete was (I’ll get to the past tense reference in a moment) a one-trick-pony utility application that sold on the App Store for $1.99 — its purpose in app-dom to find and delete temporary files that accumulate on the flash drive as a result of moves of data from the use of apps, surfing the web, or editing documents, photos and videos on any iPhone, iPad or iPod touch, into paged memory. Technically speaking, this process is performed to relieve memory demand on your iOS device. However, not all temporary files are deleted automatically and correctly, resulting in an ever-increasing volume of unused but useless data that continuously take up more space. By employing the proprietary technology developed for ProtectStar’s iShredder app, iDelete scans all the sectors of memory on your iDevice, searching for temporary data that are no longer being used and removing it, thereby restoring free disk space and allowing your device to run faster. 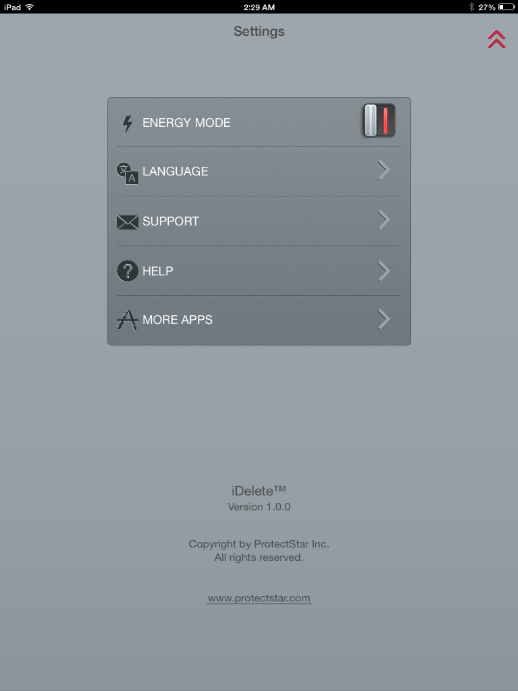 iDelete scans the memory sectors of any iDevice looking for temporary data that is no longer needed. Unnecessary data detected is then removed using military-grade erase algorithms employed in ProtectStar’s iShredder 2 Pro app, ensuring that files are completely beyond recovery, even for tech experts ProtectStar says. Designed to be part of a weekly maintenance routine, iDelete boosts system speed by freeing memory and prevents recovery of sensitive information in Temp & Junk Files and Cache & Off-Line Files.

What the hey; might as well give iDelete a try. There was no learning curve. Just start up the app (which is locked in portrait viewing mode), click the “Clean” button, and let iDelete do its stuff. 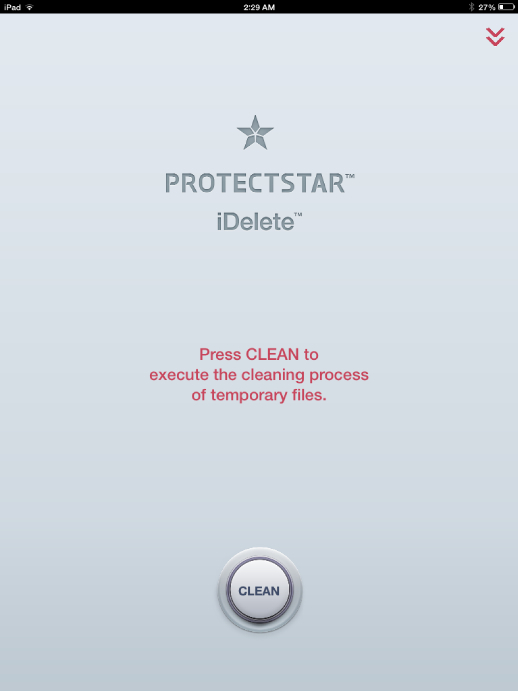 I didn’t time the procedure, and interrupted it several times to do other things, but on my 16 GB iPad 2 I would guesstimate that a cleaning left alone would execute in about 20 minutes to half an hour, depending one supposes on how messed up the memory heap,is. An animated hourglass graphic monitors progression of the process. 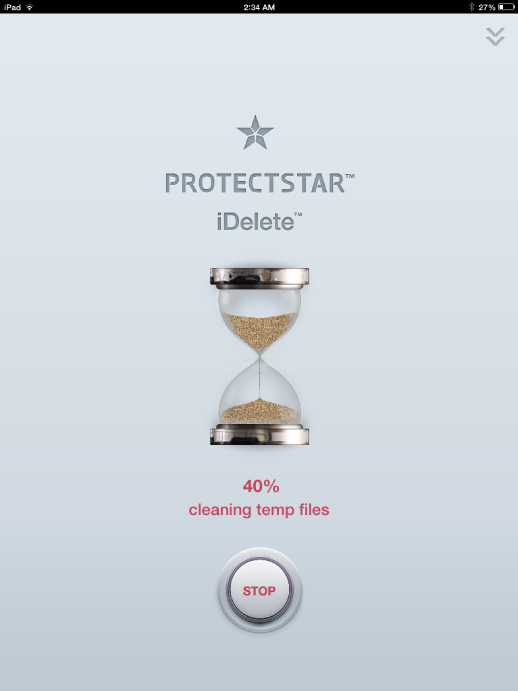 When completed, a check of storage drive status with SysInfo Lite (an excellent free app) revealed that free space had expanded to 5.62 GB (compared with less than 2 GB before running iDelete) of the 13.62 GB originally available for storage on the nominally 16 GB drive,compared with 8GB used which calculates out to there being a very respectable 41.42 percent of the drive space still open on a machine with three years’ intensive use on it. Which would make getting another 16 GB ‘Pad and saving a hundred bucks (plus 15% tax where I live) sound more promising. 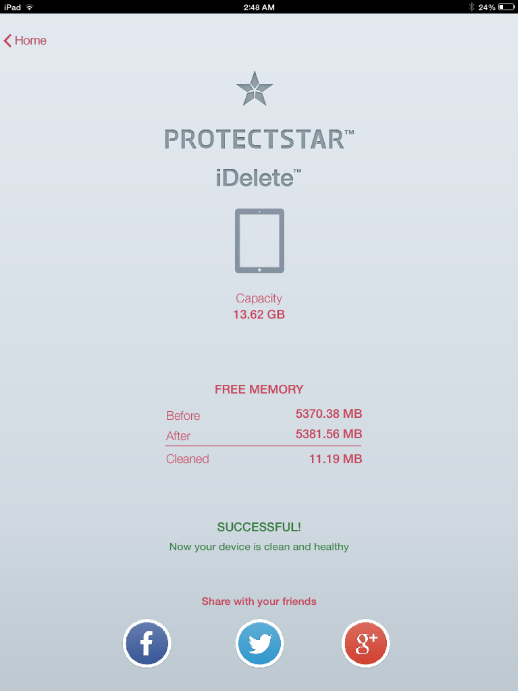 So iDelete is a great little app and budget facilitator at a very affordable price? Right? Well, there’s a catch. Apple has removed iDelete from the App Store for reasons I find puzzling. Nominally, the official reason given is because of “22.2: Apps that contain false, fraudulent or misleading representations will be rejected” whatever one can make of that.

According to the good folks at iDelete’s developers, Miami, FL based ProtectStar Inc., they were informed last fall by Apple that their apps iShredder and iDelete, as well as competitors’ apps like: iClean, iCleaner, ShredIT, iWipe, and so forth, all got the same reason for their rejection. exact details about the ‘misleading’ reason were not given. They speculate that these apps were removed because they claim to remove temporary files, which is apparently a no-no for Apple.

They further note that because Apple has rejected every subsequent update, citing the same reason, and that even after many phone conversations and sending several e-mails, nobody at Apple was able to help them or explain to them the real reasons behind the rejection.

ProtectStar also notes that 2 million users worldwide are affected by that removal and all those apps had previously been approved for up to 2.5 years, which means every update they have released had been approved by Apple without any problem. 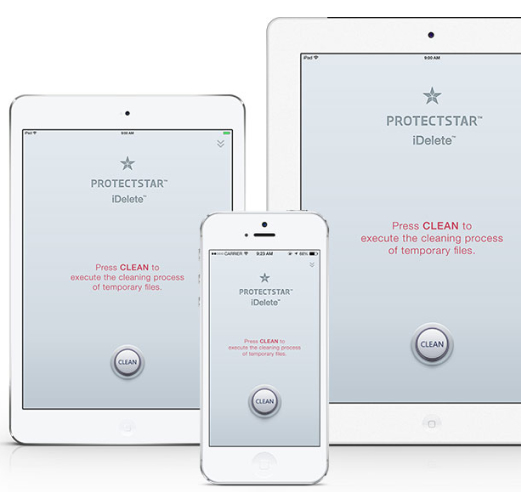 A ProtectStar spokesperson tells me that they, their customers, and also their competitors have speculated that Apple may have removed these apps because they highlight a shortcoming in the way the iOS handles and optimizes data storage and drive management, the removal wasting developers’ time and resulting in huge financial damage, while for months they’ve been told that their apps are “misleading” without any clear explanation of what should be done to rectify the situation.

So here’s the thing. That makes for happier iDevice users, which should, taking the long view, ultimately be good for Apple. And since Apple apparently doesn’t see fit to offer such a utility themselves, please at least let third parties like ProtectStar and the others do their thing.

I’m in the process of deciding which iPad model to get to replace my iPad 2, currently a week or so short of its third anniversary — a fine machine that’s never given me a moment’s trouble. If I could be sure iDelete will continue to work (restored from the iPad 2 with the rest of my apps when I upgrade my hardware), or even better: if Apple relented and allowed the storage optimization apps back on the App Store, my inclination would be to go with a 16 GB iPad mini with Retina Display or Air sooner rather than later. If I think I’m going to need more capacity due to the not as temporary as they should be files issue and iDelete being obsoleted by iOS 8 and subsequent, I’ll have to consider a refurbished iPad With Retina Display (4th gen) with a 32 GB storage drive that’s sells for the same price as a 16 GB iPad mini with Retina Display.

It’s frustrating. iOS support for iDelete and other similar apps seemed like an elegant workaround that made lowballing pirchase price outlay with 16 GB iPads less of a compromise, and I thought briefly that I’d found the answer to entering another upgrade cycle with a base level machine. Now I’m back to dithering and deferring a purchase.