In my estimation, Apple’s MagSafe power cord connector is one of the company’s best ever ideas. Introduced at MacWorld Expo in 2006 on the first Intel powered MacBook Pro, the magnetically secured charge cord plug on the computer end is designed to pull out of the laptop’s charge port upon a sudden tug, thus preventing the machine from being pulled possibly onto the floor should someone snag their foot on the dangling cord.

My daughter once launched a then quite new PowerBook Bronze Keyboard Lombard across a room by catching the charge cord with her foot in full stride. It’s a testimony to the PowerBook’s ruggedness that it survived the unscheduled flight without serious damage, but that wasn’t always the outcome in such incidents. The relatively large PowerBook coaxial charge cord plug on the PowerBook G3 Series ‘books was a snug fit that tended to tenaciously hold on when suddenly pulled on. It was succeeded by a smaller diameter coaxial plug on the early 00s era titanium and aluminum PowerBooks, but Apple finally got it right with the MagSafe.

In 2007 Apple was granted US Patent No. 7311526 covering a “magnetic connector for electronic device” described in the patent abstract as: 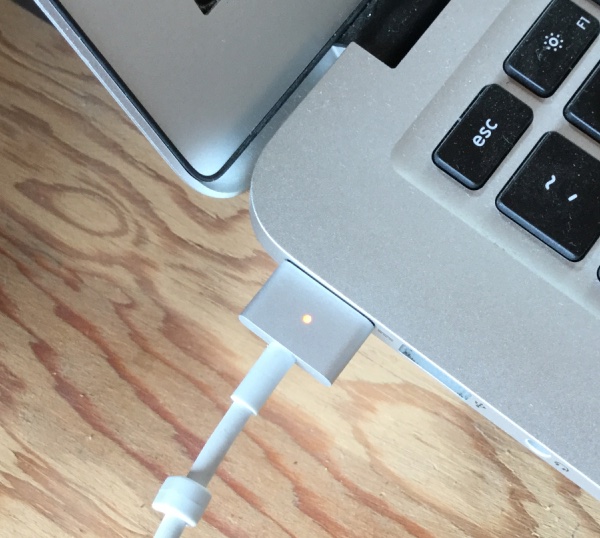 For the past ten years Apple has vigorously defended its MagSafe exclusivity, and refused to license third parties to make MagSafe compatible connectors and cables, but it appears that the MagSafe era may be soon drawing to a close. Apple dumped MagSafe from the 2015 12-inch MacBook with Retina display in favor of one do-all USB Type-C port that has to shoulder all I/O, video out, and charging tasks, but does not share MagSafe’s protective attributes. The rationale for the switch may have been that the MagSafe was simply too bulky to be accommodated by the anorectic sliver of a MacBook, but it’s also speculated that the next-gen MacBook Pro and whatever succeeds the current MacBook Air (if anything) will also be razor-thin and go with USB-C — hopefully at least with more than one port.
I’m a bit torn on this one. I’m a proponent of open connectivity standards in general, and USB-C is likely to become the next dominant standard, as did USB 1 and 2. I’m hoping Apple will eventually replace or supplement the Lightning connector on iPads and iPhones with a USB-C port, which would kill several birds with one stone so to speak.

However, MagSafe is such a great feature in practical terms, I really hate to see it go. And perhaps we don’t have to — at least in terms of its practical functionality. Longtime Apple products accessories innovator Griffin Technology has just come out with a timely new product, the BreakSafe Magnetic USB-C Power Cable — a breakaway power cable for USB-C laptops. 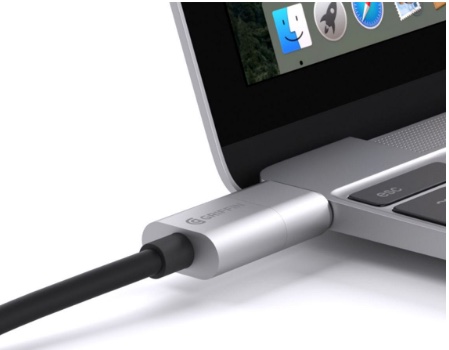 BreakSafe restores the safety and convenience advantages of MagSafe to newer MacBooks with USB-C connectors, and brings them for the first time to other brand laptops with USB-C ports as well. 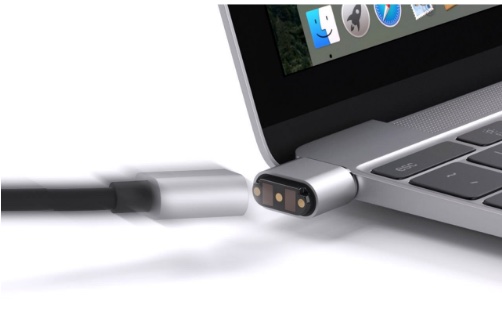 The patented (US Patent No. US7658613B1) quick-release magnetic connector plugs into the laptop’s USB-C port and safely disconnects from the rest of the cable when under stress or strain, like tripping over the power cord. Presumably it gets around Apple’s MagSafe patent because it’s a USB-C cable and not a MagSafe cable, although its practical function should be quite similar. 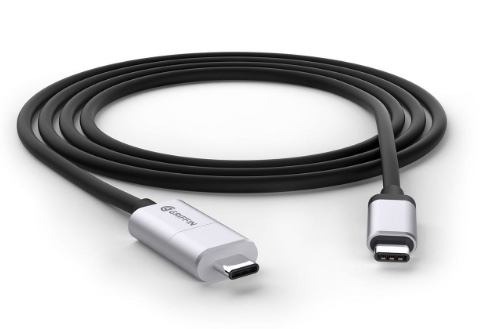 The 12.8 mm deep magnetic connector is compact enough that you can leave it plugged into the laptop’s USB-C port when not in use. YOu can use BreakSafe’s included USB-C cable with the USB-C charger that came with your laptop. BreakSafe is compatible with USB Power Delivery and is rated up to 60 watts (20 volts @ 3 amps). However Griffin emphasizes that BreakSafe is for charging power only, with data and video not supported. That would still be plenty enough, especially on our as yet hypothetical next MacBook Pro with more than one USB-C port.

Visual: Visual markings on the connector housing show the user the correct way to attach the cable and connector.

Magnetic: BreakSafe’s magnets only allow it to be connected the correct way, and ensure the cord’s polarity is consistent with both the power supply and the device being powered.

Structural: BreakSafe has two small keys molded into its magnetic connector that physically prevent the magnets from engaging, and prevent the cable from connecting incorrectly.

Electrical: BreakSafe’s central ground pin is the first conductive element to touch when joining the cable and connector This ensures that any static electrical charges are dissipated before before the cable begins passing power from supply to device.