If I was still using an iPad older than my iPad Air 2, I would be irresistibly tempted to trade up to one of the new $329.00 2017 iPads — AKA iPad 5. Even here in Canada where the selling price is 449 beleaguered seventy-five cent Canabucks. 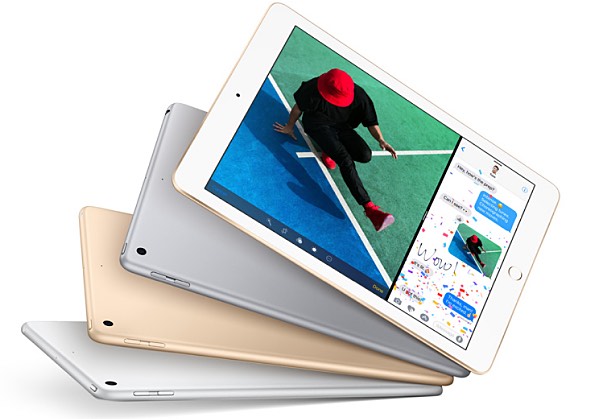 I’m confident there will be more iPad announcements coming soon, and some contend that’s reason to wait. I agree if you already have an Air 2 like mine or an iPad Pro — either size. However, if you’re still soldiering along with an original iPad Air or something older, then you’re probably not very interested in Apple Pencil stylus or Smart Keyboard Smart Connector type Keyboard support (and their daunting extra cost), so the new value leader iPad will be a very satisfying upgrade from the tablet you’re using now. If you’re in the hunt for your first iPad, this one is pretty much a no-brainer unless you’d sooner have an iPad mini.

My initial take on the new iPad was that it amounted to an upgrade of the iPad Air 2 it replaces in Apple’s iPad lineup offered for sale — the “iPad Air 3” by any other name if you will. However, further investigation reveals that it is really more an upgrade of the original iPad Air, with which it shares a slightly thicker housing form factor, than of the iPad Air 2. The new iPad has a faster A9 64-bit A9 processor, with embedded M9 motion coprocessor system-on-chip compared with the A8X in my Air 2, although the real world performance difference is not dramatic. What it does not have is the Air 2’s fully laminated display with anti-glare coating. Hey, they had to cut OEM cost somewhere when making a price slash as radical as they did with this unit.

In addition to the faster silicon, the new iPad’s greater battery capacity — 32.9Wh versus the Air 2’s 27.6Wh and the iPad Pro 9.7’s 27.9Wh — does appeal, and I would gladly trade some thinness (in general across all of Apple’s system lines) for longer battery life and more connectivity features. However, while the unlaminated panel should be a decent performer, trading down from the Air 2 in order to get the faster processor and bigger battery would seem like a step backward for me. I’m still very happy with the Air 2, and will definitely wait to see what’s forthcoming in professional grade iPaddery.

That said, I think Apple’s strategy with the $329 entry level iPad is brilliant. It will finally be able to compete on price with the mid-pack Android and Windows tablet offerings, and its 32GB of standard storage memory, while not huge, is at least practical, which the old base models’ 16GB was not, even on my old iPad 2. The value price should also put Apple back in contention in the education market (the base iPad is priced at $309 at the education store) where it has been getting squeezed out by inexpensive Chromebooks.

Also, if you really need a new iPad right away, you should have peace of mind about buyer remorse. The new iPad’s A9 power, while not state of the art with an A10 in the pipeline, should keep it in the hunt for some time to come. I would suggest going with the 128GB memory upgrade if you can handle the extra outlay. The new iPad tops out at $559 for the 128 GB, Wi-Fi + LTE model — still less expensive than the base 9.7-inch iPad Pro.

Speaking of the future, iFixIt in its initial teardown of the new iPad noted that because the display panel’s LCD and digitizer are unfused, they can be replaced separately, which they say is is great news for repair techs and the cost of screen replacement.

Subsequently, iFixit’s Evan Noronha tested the 2017 iPad’s compatibility with other older iPad air parts, confirming that the new iPad is mostly an updated original iPad Air. He raided iFixIt’s warehouse of Air 1 and Air 2 parts to find out which were compatible with the 2017 iPad and which were not. Ones that were included the digitizers/front glass panels which are the most commonly damaged iPad components, the headphone jack, the Air 2 rear-facing camera the Air 1 left antenna and the Air 1 microphone assembly. The Air 1 battery was untested, but Noronha notes that it has the same model number and same specs. as the iPad 2017 battery.

In another perspective on the iPad’s future, former Apple exec. Jean-Louis Gassée in his Monday Note blog this week says he believes an iPad turnaround is coming and that rumors of its demise are greatly exaggerated, observing that in calendar 2016 Apple’s iPad revenue was $19B, which would rank its iPad operations independently 149th on the Fortune 500 list.

In the meantime, the $329 iPad in my estimation represents the greatest value Apple has ever offered in an iPad for folks who don’t mind saving significant up-front expense by using mature but still very robust technology.