As I noted here last week, the editors of LAPTOP Mag dropped Apple to a fifth-place tie in their annual “Best & Worst Laptop Brands” survey for 2017 from the top laptop spot its MacBook notebooks had held since the survey was inaugurated in 2010. The main reason for the ratings swoon was disappointment with the new MacBook Pro models Apple rolled out last fall.

Nevertheless, despite widespread negative criticism the redesigned MacBook Pros have received, it appears they must be selling, fairly robustly. Last week the market analysis firm International Data Corporation (IDC) reported that according to its Worldwide Quarterly Personal Computing Device Tracker, Apple maintained its fourth position among the top five personal computer vendors worldwide and recorded 4.1% year over year growth in traditional PC (laptop and desktop) units shipped in the first quarter of 2017 (1Q17) worldwide. That performance handily outstripped the vestigial 0.6% year-over-year growth the industry as a whole squeaked out in the quarter. 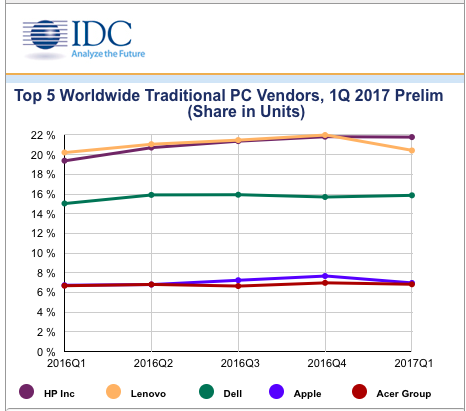 With Apple’s Mac notebook/desktop sales ratio these days estimated at roughly 80/20, that means an awful lot of MacBooks are being sold, with Apple now having only three and a half (the base 2016 MacBook Pro with no Touch Bar being the half) distinct notebook models, it’s reasonable to assume that a substantial proportion of them are the new MacBook Pro models. That said, for some time prior to the new MacBook Pro rollout last October, the best selling Apple notebook had reportedly been the 13-inch MacBook Air, which has not been updated since March, 2015, but is currently still available as the company’s price leader model. Old-school (pre late 2016) 13-inch and 15-inch MacBook Pros are also still on offer, and I’m guessing that a big reason why Apple hasn’t pulled the proverbial plug on these older designs is that they are still selling too well to discontinued at present with sales rumored to be “through the roof.” I would love to see a detailed model-by-model Apple notebook sales breakdown showing how much of Apple’s near industry-leading (Dell managed 6.2 percent growth y-o-y in 1Q/17) PC sales growth is attributable to sales of older Mac notebook models. 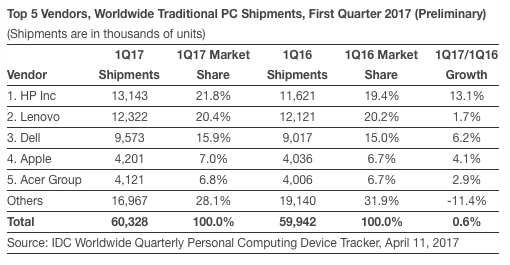 Of the seven distinct Apple notebook model lines currently available, if you count the Touch Bar and non Touch Bar late 2016 13-inch MacBook Pros as separate models, only four (the late 2016 Pros 13 and 15-inch and the 12-inch MacBook with retina display) are being updated, the remaining three believed to be destined for end-of-life presumably when sales slackens to a degree that discontinuing them makes business sense.

That would leave Apple with only the 12-inch MacBook and the less than widely popular late 2016 Pro models with their noisy, uncomfortable, jam-prone “butterfly action” keyboards and USB-C only connectivity, as opposed to a growing array of very attractive Windows PC laptop models in innovative configurations, especially from HP, Dell, Lenovo, and relative newcomer Razer. Many of them have real touchscreens as opposed to Apple’s Touch Bar gimmick.

Taking a longer view, it seems probable that Apple wants to allocate its $sub-$1,000 personal computing device category to the iPad, precociously pitching the iPad Pro as a “Super Computer” and “better than a computer” in their advertising, although there’s quite a bit of push-back against that strategy from folks like myself who use relatively low-end Mac hardware for work productivity. I currently have two 13-inch MacBook Airs, and while I admire the pre-October 2106 MacBook Pros, I’ve found the MacBook Airs more than satisfactory for my needs. My iPad Air 2, as much as I love it, is not nearly satisfactory as a solo production tool, and I don’t perceive either of the iPad Pro models as closing the capability gap substantially because they haven’t addressed fundamental shortcomings in the iOS and connectivity.

As for the forthcoming iPad Pro becoming the MacBook Air’s replacement, in Apple’s product lineup, Donklephant blogger Elena Anderson thinks it’s possible, speculating that iPad Pro 2 will get a major overhaul featuring a completely new folding design with bezel-free display and a Touch Bar that will likely make more sense on a tablet than it does on the MacBook Pro notebook.

However, for an iOS device to ever be a satisfactory notebook substitute there’s a familiar laundry list of features and capabilities that need to be addressed, including an accessible file system directory, mouse support, global content level search, real multitasking with multi-windowing, and less cumbersome app-switching, to name a few examples. Ideally, if the iOS is indeed to be the future, I would also like to see an iOS device with a clamshell laptop housing and keyboard with mouse or trackpad support, but also retaining the iPad Pro’s touchscreen, with a starting price of less than $1,000. With the new $329.00 iPad released last month, Apple has shown that it can compete on value when it wants to.

However, what remains a puzzlement is trying to discern what paths Apple wants to take in the PC market going forward. A lot of PC laptop customers and users now expect a touchscreen, with many, including this writer, joining LAPTOP in dismissing the Touch Bar as irrelevant. If Apple has determined that the engineering effort necessary to add touch support to the macOS can’t be justified, an iOS notebook that didn’t demand major workflow compromises and impose show-stopper inabilities would be a logical workaround.