Originally published in 2001. Several of our readers have sent us email about the various PowerBook G3 Series configurations and how they were confused when buying used or refurbished models at various vendors. Most of the confusion revolves around the 12.1" models and the 233MHz 14.1" models.

Some of the PowerBook G3 Series I models, introduced in May 1998 and referred to as Wall Street, had available 12.1" passive-matrix screens with either 233MHz or 250MHz CPUs. The 233MHz variety had no L2 cache, and some didn’t ship with modems. PowerBook Central recommends that you avoid the 12.1" passive-matrix (DSTN) screens like the plague, no matter how cheap they are. A 14.1" active-matrix (TFT) model was also produced with the 233MHz CPU, and this model also had no L2 cache.

With the introduction of the PowerBook G3 Series II in September 1998, Apple gave the 233MHz CPU 512K of L2 cache and upgraded the 12.1" screens to active-matrix. This corrected the biggest problems we had with the Series I models. The Series II models also included a choice of 266 and 300MHz processors.

So how do you tell the difference? For 12.1" screens, make sure you know if it’s the passive-matrix (DSTN) version or active-matrix (TFT) model. This is usually given in the description of the PowerBook. For 233MHz models with 14.1" screens, those which have a model number beginning with "6" are cacheless Series I models, while those whose numbers begin with "7" are Series II models with L2 cache. These are the specs for Series I can Series II Wall Street PowerBook G3’s: 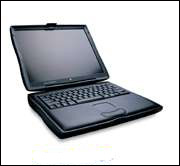 In 1999, Apple introduced Lombard model PowerBook G3’s, also referred to as Bronze Keyboard. These machines were a little thinner & lighter with translucent bronze keyboards and the words ‘Macintosh PowerBook G3’ on the casing below the screen. The white Apple logo on the lid glowed when the machine was on. This also marked the introduction of USB on PowerBooks. Lombard PowerBook G3’s were available with 333 and 400MHz processors and a 66MHz system bus. Here are the specs for Lombard PowerBook G3’s: