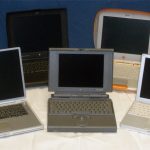 Picking the ten most desirable from the ever-growing list of Apple notebook computers is always shooting at a moving target. It’s also necessarily something of an exercise in subjective evaluation, and dependent on what criteria one applies. For instance, if the measure was based purely on raw computing power or value for the money or an amalgam of both, we could include all, or at least most of the current offerings in a “ten best” feature. Or we can evaluate on the basis of chronologically contemporary context – say: “ten greatest,” or on historical impact and significance, which is the focus of this article.

Picking one of the 100 Series PowerBooks was a head-scratcher. I imagine some would say that choosing the PowerBook 100 would be a no-brainer, since it was the very first PowerBook, which has to be significant, and they have a good point, but the PowerBook 100, which was built in Japan for Apple by Sony, wasn’t a big-seller, although it did develop a loyal following. I might have chosen the PB 165 or the PB 170 — the 165 because of its slightly faster processor, or the 170 for its active matrix grayscale screen, and because both sold very well and really launched the PowerBook Mystique. However, I’m going with the PowerBook 180 and 180c with its faster 68k processor, including a floating point unit, and the active matrix screen, plus larger hard drives,.

The PowerBook 180’s NiCad battery provided somewhere between 90 minutes and 2.5 hours of use, and its 68030/33 MHz Motorola processor with FPU gave it serious computing power in the context of the time. It supported a maximum 14 MB of RAM, and could drive an external color monitor through its video-out port.

The PowerBook 500 “Blackbird” is one of the best-loved Apple portables of all time, and it was a design tour de force in 1994, powerful for its time ( a ‘portable Quadra”), stable, reasonably rugged, attractive in a swoopy, Star Wars-y sort of way, and held its value well. The PowerBook 500s were the first Mac laptops (except for the Duos in their docked mode) that could serve practically as one’s “only” computer – a true desktop substitute, albeit with some limitations.

The 500 series PowerBooks came in five models, with five different LCD displays, two clock speeds, and three versions of the ‘040 processor chip. The two slower 25 MHz units (520 and 520c) came with passive matrix grayscale and passive matrix color screens respectively. The faster 33 MHz 540 and 540c came with active matrix grayscale and color displays respectively, and the 550c, which was not distributed in North America, had a full 68040 processor (with floating point unit — the 520 and 540 models had FPU-less 68LC040 variants of the chip), a 10.4” active matrix color screen, and larger 500 or 750 MB hard drives.

All 500 Series was also significant for offering the first PC Card support in a PowerBook via a (rare) optional expansion bay “cage.” Most 500s came with an optional internal modem (Global Village “Mercury” — 19,200 bps), and another very significant development that arrived with the Blackbird was the trackpad (it was the first laptop so-equipped). It also came with a full-size keyboard including function keys,, stereo speakers, an internal microphone, video output, Ethernet, and a maximum RAM capacity of a whopping 36 MB, and all 500s were upgradable to PowerPC with a processor daughtercard swap-in.

I had to include the Duo, Apple’s dockable first sub-notebook PowerBook, which I considered one of the coolest computer ideas when I first heard of it, and still do. The original concept was for the portable unit to function as a normal laptop while on the road, but when you returned home or to the office you could insert the closed Duo into a Duo-dock with a full-size CRT monitor, a full set of ports, and internal expansion slots and have it function as a few-compromises desktop computer. This was a lot more compelling in the days before large active-matrix color laptop monitors.

The PPC Duo debuted at the same time as the controversial PowerBook 5300, and used the same 100 MHz 603e processor as the three lower-end 5300s, although it was somewhat slower (by about 15%) than the 5300 due to its antiquated internal motherboard architecture inherited from the 680×0 Duos. The 2300c featured a NiMH battery offering up to three hours use between charges, and supported up to 64 MB of RAM.

The 2300c also actually trumped the newer PB 5300 series by having the first “tappable” trackpad (shared with the ‘040 190 series) that Apple offered in its notebooks.

I’ll likely get some brickbats thrown my way over this selection, but remember, this is a list of the most significant Apple ‘Books – not necessarily the best ones. The 5300 was the first (along with the concurrently released Duo 2300) Power PC Mac laptop, The first with a real removable-device expansion bay and built-in PC Card support (discounting the PowerBook 500’s kludgy battery-bay “cage”), THe first with an 800 x 600 resolution display, the first that used standard IDE/ATA hard drives (the PowerBook 150 preceded it with a non-standard IDE HD), the first with 1 GB and larger hard drives, and the dubious distinctions of the top-of-the-line PowerBook 5300ce being the most expensive laptop Apple ever sold, the first (very briefly to ship with a lithium ion battery (which unhappily has a tendency to spontaneous combustion and was quickly recalled) and the first Mac ever to get its very own Apple’s REA repair extension program.

Some people refer to the PowerBook 1400 as the PB 5300 “done right,” which is significant in a backhanded sort of way, but more importantly it was the first-ever Apple portable with CD-ROM support, the first with its processor mounted on a removable daughtercard, the first that was relatively easy to open up and work on via its removable “flip-up” keyboard, the first Apple ‘Book with two RAM expansion slots and it happily proved to be solid in the several areas where the 5300 suffered deficiencies in ruggedness and reliability, and was also distinguished by having one of the best keyboards that ever shipped with a Mac laptop.

The PowerBook 3400 was significant for being the first really fast PowerBook, actually coming close to matching the performance of contemporaneous desktop towers. It combined an efficient new PCI-based motherboard architecture and faster Power PC 603e processors (all with 256k L2 cache) with a stretched version of the PowerBook 5300 case, to become, for a short while, the fastest laptop computer on the planet, and the first Mac laptop to be successfully equipped with lithium ion batteries and the only one to come with a four-speaker sound system including a built-in “subwoofer.” The big, solid 3400 was plagued by very few gremlins and glitches, and is one of the most dependable PowerBooks of all time.

Despite its short-lived tenure at the top of the notebook heap, the 3400c represented a quantum leap in PowerBook performance, being up to three times as fast as the PowerBook 1400.

The (truly) original “clamshell” iBook has significance as the first “consumer” Mac laptop, and one of the most unique laptop computer designs ever. For one thing it was colorful. Previously all laptops had been black or gray (there was a very limited special edition PowerBook 170 in white), but the iBook came in arresting two-tone themes with bright colors –variously Blueberry, Tangerine, Indigo, Key Lime, and the more subdued Graphite – accenting Snow white.

The clamshell iBook was the first ‘Book ever with built-in Airport wireless support, the only Mac “Book to ever come with a carry handle, and it was sumptuously curvaceous rather than squared off. Not everyone liked the styling. It has been compared to a makeup compact and even a toilet seat, but it certainly wasn’t boring. The swoopy, rounded form factor also helped make the iBook’s Lexan case very rugged. The downside was that it was also big, bulky, and heavy — more so on all counts than its “ big brother” PowerBooks of the time.

Other iBook distinctions were that it had no doors covering the connection ports (a motif that became universal on Apple laptops, but is now reversed with the MacBook Air), and its spring loaded lid had no mechanical latches.

Choosing between the PowerBooks WallStreet and Pismo as the most significant representative of the PowerBook G3 Series was another toughie. I might well have gone with the WallStreet because it came first, and was arguably the most comprehensively connectable and expandable PowerBook ever built, with its full set of classic PowerBook ports, two PC card slots allowing upgrades to USB and FireWire, WiFi, or other things, Ethernet and IR connectivity, its expansion day, and the ability to support batteries in both the left and right bay. The WallStreet keyboard is also in my opinion be the best keyboard ever offered on a PowerBook..

However, I decided to go with the PowerBook G3 2000 Pismo instead because it represented a more substantial technological leap with its UMA motherboard and “New World software architecture” ROM, its built-in FireWire substituted for SCSI and built in AirPort wireless support.

Another point in the Pismos favor is its phenomenal longevity as a practical production machine. I have two of them still in active service.

In short, Pismo is one honey of a PowerBook, upgradable to 550 MHz G4 power, and also supports easy optical drive upgrades to SuperDrive status with its removable-device expansion bay.

Introduced in January, 2003 along with the awesome 17” PowerBook G4 was the delightful little 12” PowerBook, which shares the metal case and styling theme of the bigger AlBooks, but has much in common with the 12 inch iBook in terms of internal engineering, being built by Apple’s iBook supplier, Asustek, as opposed to the 15 inch and 17” models which were made for Apple by Quanta. The 12-incher is a delightfully fetching little package, the smallest PowerBook ever, has proved admirably rugged, and is one of the best-loved ‘Books ever.

I chose the 17” aluminum PowerBook G4 over its 15” sibling not because it came first, but because it was the first 17” Mac laptop, the grandest PowerBook Apple ever built and the ne plus ultra of of desktop substitute portables in its time, and because it was much more reliable than the glitch-plagued 15-incher.

The aluminum 17” PowerBooks came with 1440-by-900 or 1680-by-1050 pixel resolution widescreen displays and svelte 1” thick anodized aluminum cases and the largest footprint of any PowerBook ever.

The i.5 GHz and later models also came with Apple’s hard drive protecting Sudden Motion Sensor technology and scrolling trackpad. The fiber-optic backlit keyboard’s ambient light sensors also control the brightness of the display and automatically regulate the keyboard backlighting. In low light, they automatically illuminate the keyboard and lower the display brightness. As light levels increase, the display brightness is re-adjusted automatically and the keyboard backlighting is turned off. There’s also FireWire 400 and 800, USB 2.0, built-in Bluetooth and AirPort Extreme connectivity. The last-generation (October 2005) 17” machines have an 8x SuperDrive with double-layer support.

So there you have it; my picks for the 13 “most significant” Apple Mac ‘Books. I agonized a bit over not including the PowerBook 100 (as discussed above), the PowerBook 2400c, the WallStreet, and the white iBook, all of which have profound significance in Apple notebook history, but which I ultimately deemed not uniquely or representationally significant enough to make the cut.

I’ll be interested to hear from those who agree and disagree with my selections. Originally published by Charles W. Moore.

Here are the candidates: