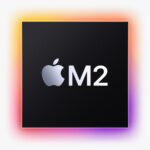 Apple’s new M2 processor is much faster than the older low-power Intel chips used in Mac computers for years and represents a big improvement over the original M1 chip. This is excellent news for users who want to upgrade their machines but don’t want to spend a fortune. But just how much faster is the M2 processor? Let’s take a look at the differences between the two processors to find out.

The M2 processor also has a larger cache, as well as increased memory bandwidth. This helps the processor to process data more quickly, allowing for faster speeds. Additionally, the M2 can be configured with up to 24GB of fast unified memory, compared to the M1’s 8GB. This means that the M2 processor can access memory faster, resulting in better performance.

The M2 processor also has a Neural Engine that can process up to 15.8 trillion operations per second. This is 40 percent more than the M1 processor and allows for faster multitasking. Furthermore, the M2 processor has a powerful ProRes video engine, allowing for the playback of multiple streams of 4K and 8K video.

Finally, the M2 processor represents good value. The M2 MacBook Air and M2 13-inch MacBook Pro, for example, are similar in price to earlier M1 models, and offer better performance. This means that users can get a powerful machine without having to break the bank.