The worldwide smartphone market began 2014 with an expected retrenchment from holiday quarter shipment volumes, but still posted a year-over-year increase in the first quarter of 2014 (1Q14), according to metrics compiled by the International Data Corporation (IDC) Worldwide Quarterly Mobile Phone Tracker.

In 1Q14, vendors shipped a total of 287.8 million smartphones worldwide, up 31.5% from the 219.0 million units in 1Q13 but down -0.7% from 290.0 million units shipped in 4Q13. Smartphone average selling prices (ASPs) continued to drop in the first quarter reaching a record low of $316 — down from $336 in 4Q13, showing continued signs that consumers are embracing low-cost mobile computing. Smartphones now account for 63.1% of the worldwide mobile phone market, up from 50.7% a year ago. 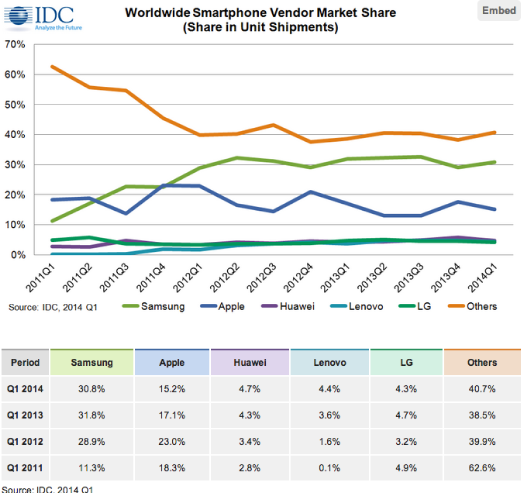 Samsung began 2014 exactly where it started and finished 2013: as the undisputed worldwide leader in the smartphone market. By the end of the quarter, Samsung had shipped more smartphones than the next four vendors combined. While the company relied on its high-end smartphones within mature markets and its deep selection of entry and mid-range models in emerging markets, Samsung unveiled and launched its flagship Galaxy S5 within select markets.

Apple reached a new first quarter record, breaching the 40 million unit mark. The company saw double-digit growth in Japan as well as across multiple developing markets, including Brazil, China, India, and Indonesia. Still, this made for the lowest year-over-year improvement among the leading vendors. What remains to be seen is when not if Apple’s rumored large-screen models will arrive on the market, filling a gap in the company’s portfolio that has been exploited by the competition.

Huawei kept its third place position worldwide, beating out Lenovo by fewer than a million units. Huawei’s aim for 2014 is to ship 80 million smartphones worldwide, and contributing to that is the company’s increasing emphasis on large-screen smartphones. Huawei revealed its latest addition, the Ascend Mate 2 4G, which features a 6.1-inch screen, one of the largest screen sizes in the industry.

Lenovo posted the largest year-over-year increase among the leading vendors, with continued success in Asia/Pacific and a nominal presence elsewhere This will quickly change once the acquisition of Motorola is completed, thereby giving the company a footprint in markets including North America and Western Europe where it has been notably absent.

LG continued as the number five vendor worldwide and its 12.3 million units were enough to stave off multiple Chinese vendors, including Coolpad, Xiaomi, and ZTE. Driving the company’s success was its emphasis on LTE-powered smartphones, including the G2, Nexus 5, and the G Flex. At the same time, the company saw the continued success of its mid-range F-series and entry-level L-series devices.

IDC nots that the worldwide smartphone market began the year with an expected retrenchment from holiday quarter shipment volumes, but still posted a year-over-year increase in the first quarter of 2014 (1Q14).

According to the IDC Worldwide Quarterly Mobile Phone Tracker, vendors shipped a total of 287.8 million smartphones worldwide, up 31.5% from the 219.0 million units in 1Q13 but down -0.7% from the 290.0 million units shipped in 4Q13. Smartphone average selling prices (ASPs) continued to drop in the first quarter reaching a record low of $316. This is down from $336 in 4Q13, showing continued signs that consumers are thriving for low-cost mobile computing. Smartphones now account for 63.1% of the worldwide mobile phone market, up from 50.7% a year ago. 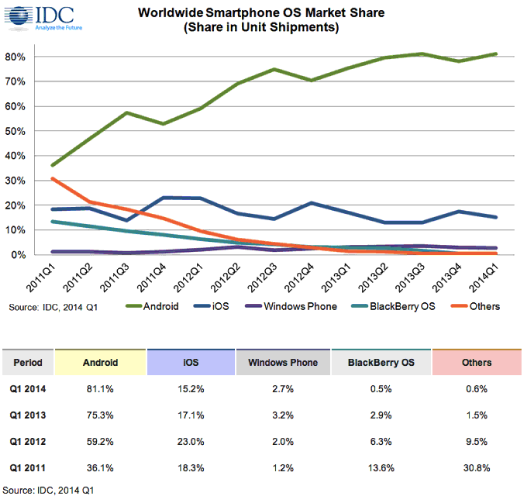 Android proved once again it is positioned where the market is going by growing its volume from the fourth quarter, something that doesn’t happen too often given the smartphone market’s seasonality. Larger 5-7″ Android devices grew to 84.5 million in 1Q14, which was 36.2% of all Android shipments globally. Samsung leads in the Android camp, while the rest of the pack is quickly being made up of Chinese vendors. Huawei, Lenovo, Coolpad, Xiaomi, ZTE, and OPPO were all part of the top 10 Android vendors in the first quarter of 2014.

iOS experienced its normal 1Q14 sequential downturn coming off a strong holiday season. Pent-up demand for something new and most likely larger will most likely leave iPhone buyers holding out to see what is next. Apple made headway in a number of emerging markets, capitalizing off older, less expensive models. Having the iPhone 4 in production during Q1 shows that demand is certain within those markets, however prices of the new devices are beyond the average consumers budget, including the iPhone 5c.

Windows Phone grew 8.7% year-over-year with 7.6 million shipments, almost entirely driven by Nokia. Despite the growth, Windows Phone still only has 2.7% smartphone market share. By dropping its licensing fees the platform becomes much more appealing, in addition to the features that come along with 8.1. Now that the Nokia acquisition is complete all eyes will be on execution and what comes next.

Blackberry market share continued to slide in 1Q14 dropping to under a percentage point, down from 2.9% of the smartphone market a year ago. The question now remains as to whether BlackBerry will stay committed to smartphones despite its continued downward progression. Recent announcements of its first Foxconn manufactured low-cost device are steps toward where the market is moving.