There are a lot of note-taking and text editor apps available for the iPad. Some are quite good, including several free…. uh sorry…”get” and ad-supported apps. Many have some word processing features, and there are a number of nominally designated word processors, including Apple’s Pages for iOS which now comes bundled on new iPads along with the other members of Apple’s iWork productivity suite, and Microsoft Word — a “preview” version of which was recently made available for free as well. There are also CloudOn, Smart Office, WPS Office and more.

Personally, I lean more to text editors, since I rarely these days have occasion to produce styled, formatted documents for printing out in hard copy, and I work near exclusively in plain text and/or html. For reading the occasional Microsoft Word document that comes my way, there are Word itself, the online Google Docs, and several iOS Office suite apps such as those mentioned above.

Occupying the middle ground are a few apps that provide a selection of word processing features, but also handle plain text gracefully with text editing functionality as well. Examples are Infovole’s family of Textkraft apps from Germany (which initially were billed as “text processors” — a useful term for this category of application); iWriter from Japan, Matcha, and the latest new kid on the block — Textilus, which is the subject of this review. If I haven’t mentioned your favorite, this isn’t intended to be an exhaustive roundup, but references apps that I’ve personally spent some time using. 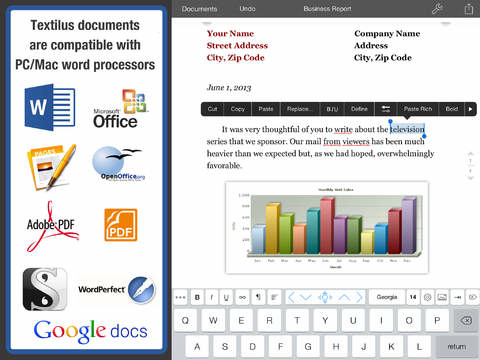 Arguably Textilus’s most distinctive feature is its support of both RTF (rich text format) — a relative rarity in iOS writing apps, and plain text. RTF is supported by OS X’s basic Text Edit app on the Mac,but Apple has no RTF-compatible app for iOS users. Consequently, Textilus makes it possible to create RTF documents on the iPad and edit them in Text Edit on the Mac and vice-versa if you’re into multi device production. MS Word also supports RTF, which provides enough formatting power to satisfy most users’ needs. Textilus can also export documents as plain .txt (hooray!).pdf, or .html files, and you can also export documents directly to Evernote, Scrivener or as email attachments.

Textilus also supports full file backup and multi-device, multi-platform access to RTF (and other) documents via Dropbox, although the same doesn’t apply with iCloud (it can export documents it creates to iCloud). That’s fine with me since Dropbox is my favorite Cloud service. I barely use my iCloud account, being much more partial to Dropbox’s flexibility and its support for all my current OS X and iOS hardware, including two old 2000 Pismo PowerBooks still running OS X 10.4 Tiger.

OS X Text Edit can save RTF documents to iCloud, but iOS Textilus isn’t able to open them, let alone sync them across the two platforms. With Dropbox there’s no problem. And Textilus can export or email documents in PDF , RTF , RTFD , ePUB , TXT, PNG , Markdown and HTML formats. Now if there was just an iOS app that supported the mildly styled documents created by my favorite Mac text editor Tex Edit Plus. I digress. 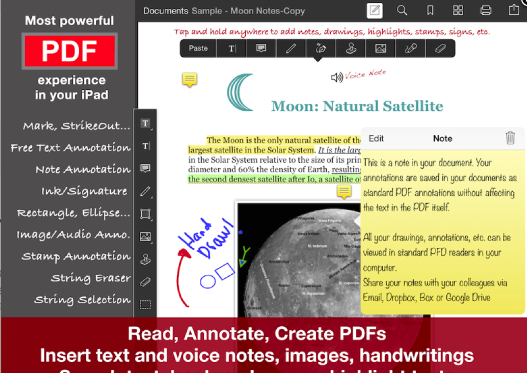 Another convenience with Textilus — especially for those of us who do a lot of Web work — is that it supports embedding links with a quick trip to the Insert menu in the virtual keyboard toolbar where you just select “Web Link.” 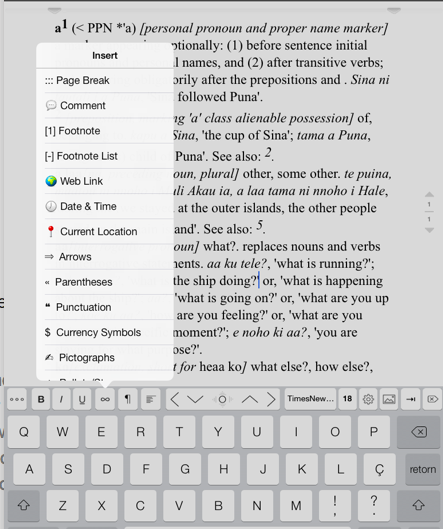 The Textilus version of the iPad virtual keyboard features a toolbar offering an array of advanced functions centred on four arrow keys and a “MagicCursor” that let’s you zap the cursor position rapidly to any point in the document, functioning sort of like the joystick in older IBM/Lenovo laptops. I have mixed feelings about Textilus’s text selection function, with which you define blocks of selected text using the navigation buttons on the toolbar rather than dragging the blue dots around with your finger that is the standard iOS routine. 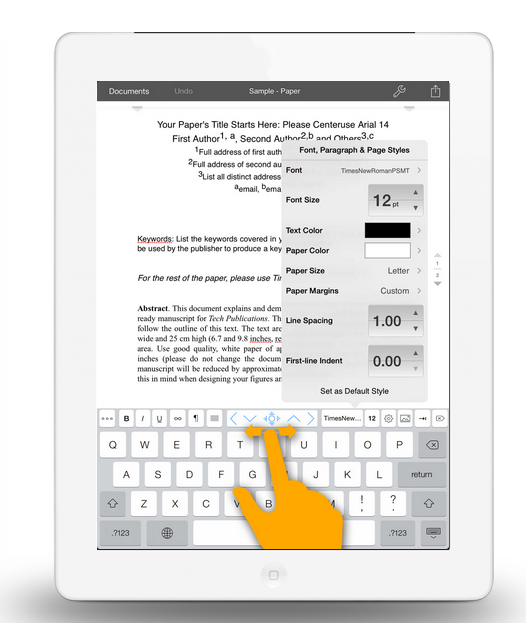 In some ways Textilus is better, giving you more precise control, but it’s also often slower, especially for making large text selections. I think this has potential to be an excellent feature, but it needs more refinement and optimization, and support for conventional selection by dragging your finger around the screen definitely needs more work. It’s currently too nervous and squirrelly. 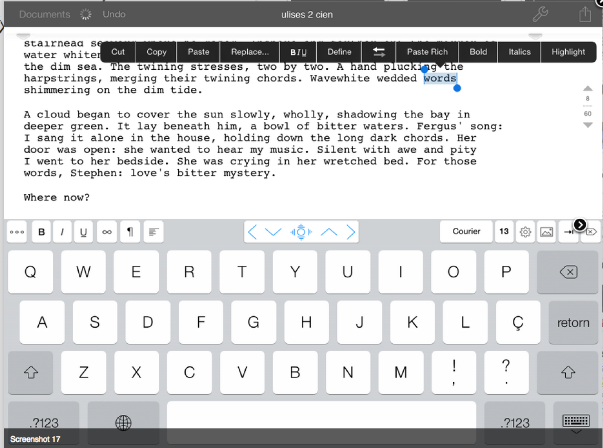 There’s an on demand basic spell-checker, go to start, end, and page navigation commands (and many more), one-click document statistics and counters: characters, words, reading time, sentences, average word length , a simple search and replace engine, mercifully a forward delete key, and for some aesthetic variety — a Sepia mode. If you’re easily distracted, Typewriter (Focus) mode keeps only the paragraph you’re typing at the center of the screen, letting you focus on what you’re writing. 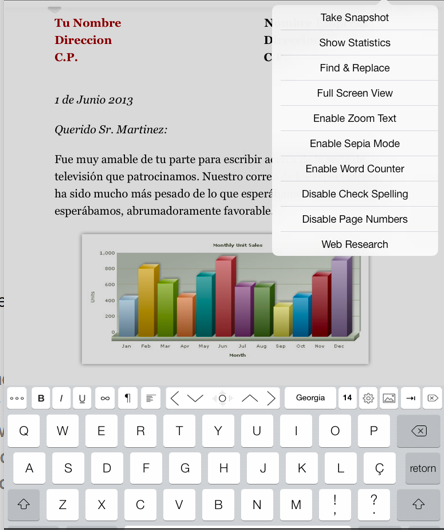 Another cool feature is Textilus’s ability to record document “snapshots,” — incremental back-ups you can return to if you suffer an editing data loss, perhaps due to the idiosyncrasies of touchscreen text selection. This has happened to me more than a few times working on the iPad, and it’s maddening, so a feature that could help with that could be a sanity-saver — if one remembers to use it! 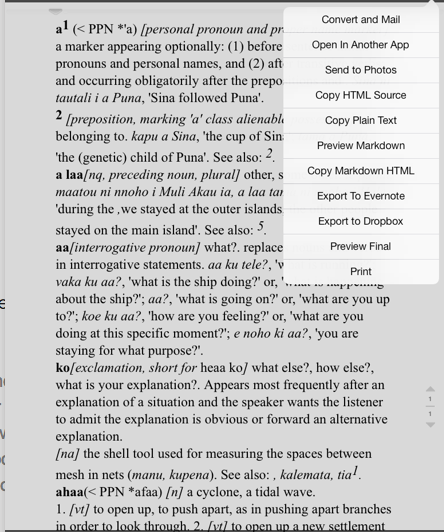 The only major unfortunate omission for me is a key or keys to toggle upper/lower case and capitalization of selections. Why that function isn’t standard on all word processors and text editors — or even better built into the iOS default keyboard itself — is beyond me.

Textilus falls short of full-featured word processor credentials in that it supports only inline graphics, and doesn’t handle columns,  tables, or charts, and its style sheet support is rudimentary. 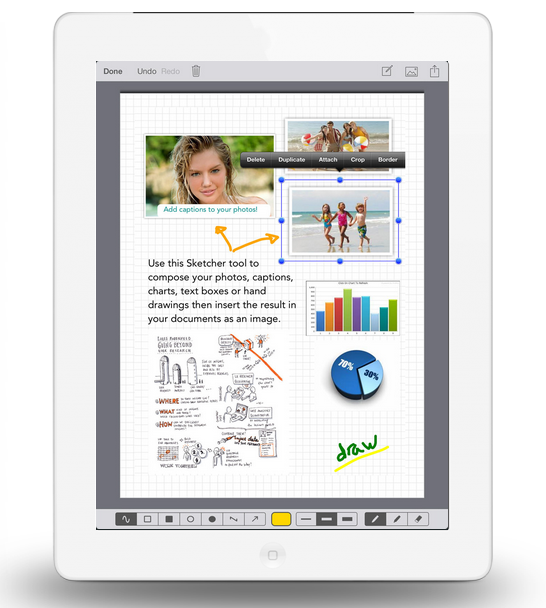 If you need those features, you need Pages, MS Word, or one of the other full-zoot word processor apps. If not, Textilus definitely merits a check -out.

The full paid Microsoft Word Office Edition, PDF Notes and Scrivener version of Textilus sells for $5.99, but there’s also a remarkably full-featured free version that will give you a good sampling of what Textilus is capable of without making any cash commitment.