Last week, Apple quietly deleted the original iPad mini from availability on the online Apple Store, where it had been selling at $249 as Apple’s price-leading tablet since last October when the mini 3 was released. One aspect of this is that all available models of iPad mini and iPad Air now have 64-bit Apple-designed systems-on-chip and high-resolution Retina displays. have 64-bit Apple-designed CPUs and high-resolution Retina displays. 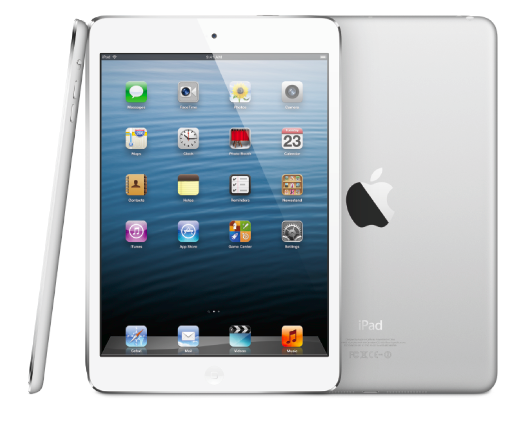 I doubt that it was selling very robustly, since at just $50 less than the much more capable iPad mini 2 with its Retina display and 64-bit A7 system-on-chip, the original mini wasn’t even a decent value, let alone a bargain. Even when it was released in 2012, the first iPad mini was a ho-hum performer — essentially the 2011 iPad 2 spec with an A5 SoC and a 1024 x 768 resolution display. It served its purpose in its day as a smaller iOS tablet that was easier to take along. A friend of mine is still using hers mainly as an email platform and likes it, but personally I never got very excited about the iPad mini until the mini 2 debuted in 2013, with a Retina display and offering only marginally less A7-powered performance than the contemporaneous full-sized iPad Air.

Unfortunately, in the 2014 annual upgrades last October, the mini was allowed to fall behind again, with Apple straight-facedly pitching the addition of Touch ID fingerprint sensing and the availability of a Gold color enclosure option in addition to the holdover Space Gray and Silver as a significant enough “upgrade” as to warrant its iPad 3 designation and a $399 price tag. Happily, the identical-performing iPad 2 continues to be available with its price cut to $299, making ti the no-brainer iPad value choice as long as you can live without the gold color, Touch ID, and a maximum memory spec. of 32 GB ($349).

So RIP original mini. Your passing is notable, but won’t be mourned by many.

However, discontinuing the Mac would be something else entirely. Also last week the usually sensible and insightful Christopher Mims, writing in the Wall Street Journal suggested that that Apple should kill off the Mac in order to “to focus on products that represent the future,” arguing that continued support and development of a platform that in the the company’s most recent fiscal quarter represented only nine percent of its revenue distracts energy, effort and engineering resources from support and advancement of the more popular iOS platform, associated devices and, other Apple ventures like streamed music, health, and news feeds.

However, in my estimation killing the Mac would be a major error of judgment. The Macintosh is the soul of Apple — even more than the iPhone is. I love my iPad, but I love my Macs even more, and if push ever came to shove, I would fall on the Mac side of the fence without hesitation.

As for the Mac allegedly having no future, reality is that there are still a great number of things one can do with a Mac, tasks and functions that are vitally important to content creators and other power users, that are either impossible or unacceptably cumbersome and inefficient on an iPad — let alone an iPhone. That’s not likely to change anytime soon. The iOS is improving as a productivity platform, and will take another important step along that road with the release of iOS 9 in a few months time with the new Slide Over, Picture-in-Picture and Split View features. That will mark a huge step forward productivity-wise, but there are still many miles to go before the iPad is a fully-capable alternative to a Mac. Someday, maybe, but I’m not holding my breath.

Microsoft is actually a lot closer to realization of a do-all device with its Surface lines of tablet PCs and forthcoming Windows 10 integration. However, Apple’s reluctance to port OS X to handheld portable devices can probably be interpreted as good news for Mac enthusiasts, since it indicates that the company has no plans to take up Christopher Mim’s suggestion and euthanize the Mac.

Another thing that would make Mac termination nonsensical is that it’s still growing market share, while the iPad, for instance, has been in negative sales growth for going on two years now. While “nine percent of revenue” sounds like the Mac only accounts for chump change in Apple’s revenue stream, this is Apple, and as The Motley Fool’s Jamal Carnette points out, in Apple’s most recent fiscal quarter, Mac related revenue amounted to $6.9 billion, and over $24 billion in all of fiscal 2014.

Also, that low-ball nine percent metric is a bit misleading compared with the big picture, since it pertained to a quarter in which the iPhone traditionally does exceptionally well, this year logging a whopping 57 percent year-over-year quarterly revenue growth, and an according downward blip proportionately for Apple’s other product lines. Carnette maintains that using full fiscal year 2014 makes a more fair and representative comparison, in which the Mac lines accounted for 13.2 percent of Apple’s total revenue and an increase of 12 percent year-over-year.

To look at it another way, Carnette observes that Apple’s Mac income was nearly twice the amount of Facebook’s 2014 total revenue, and enough to make the Mac line a Fortune 200 company were it a standalone entity. Not the kind of numbers that can be dismissed lightly, with due respect to Christopher Mims’s contention that Apple “doesn’t need the Mac revenue.”

But the Mac’s importance to Apple transcends mere dollars and cents. It’s the basis of my 23-year affinity to Apple hardware and the Apple community. I’m pretty sure I could get along happily with an Android or Windows tablet and phone, but not so much with a Windows PC instead of a Mac. Without the Mac, I more than likely would have long since strayed into those alternate universes instead of remaining an exclusive Apple hardware user for 23 years, and I suspect many others would say the same.