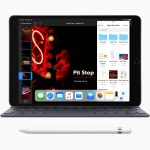 Apple today announced an all-new 10.5″ iPad Air and 7.9-inch iPad mini. With the A12 Bionic chip with Apple’s Neural Engine, the iPad Air delivers a claimed 70% boost in performance and twice the graphics capability, and the advanced Retina display with True Tone technology is nearly 20 percent larger with over half a million more pixels when compared to the previous-generation iPad Airs. The new iPad Air also includes Apple Pencil support.

According to Apple, “The new iPad Air and iPad mini join the most affordable 9.7-inch iPad and the most advanced iPad Pro models, offering the best, most innovative iPad lineup ever. The complete lineup now includes Apple Pencil support, best-in-class performance, advanced displays and all-day battery life6 for an experience unmatched by any other device.”

We’ll have a full rundown of prices and availability for the new iPads from Apple and its resellers on our price trackers this week.