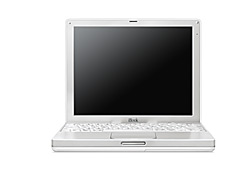 There have been several generations of dual-USB (white) iBooks since their introduction in May, 2001. The following is a table to help you sort out their differences:

The dual-USB iBooks are good all-around machines, and there is very little to fault. Exceptions include the paltry amount of RAM included on some early CD models, and the slow 66MHz system bus on first-generation units. As opposed to PowerBooks, iBooks do not have a PC card slot, S-video out, or an IR port. On the other hand, they (at least the 12" versions) are much smaller and lighter than the PowerBook G4.