Select a header to sort...last update:
Select price for details or to purchase 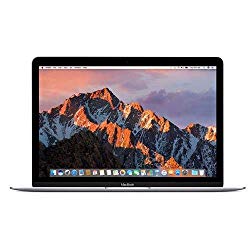 The 12-inch MacBook, which heretofore has been powered by relatively poky Intel Core M and Skylake Core M processors, got Kaby Lake CPUs up to 1.4 GHz Core i7 with Turbo Boost up to 3.6 GHz for 2017. The 12-incher can also now be ordered with up to 16GB of RAM.


Apple says that its MacBook line of notebooks have been reinvented in every way to deliver the thinnest and lightest Mac systems ever, and reviving a nameplate last used on the entry level/education white polycarbonate MacBook model in 2011.

Apple claims that every new MacBook component has been meticulously redesigned to create a Mac weighing just two pounds and measuring 13.1 mm thick at its deepest dimension. The new MacBook also features a 12-inch Retina display that is also the thinnest ever on a Mac, a dramatically thinner, Apple-designed full-size keyboard that is still highly responsive, Apple’s all-new Force Touch trackpad technology that brings a new dimension of interactivity to the Mac, acompact US B-C port for data transfer, video out and charging in a single connector, and a new battery design that maximizes every millimeter of internal space to deliver claimed all-day battery life.

Measuring just 13.1 mm at its thickest point, the new MacBook design is amazingly 24 percent thinner than the already svelte 11-inch MacBook Air. With a new precision-milled unibody enclosure featuring integrated Wi-Fi antennas and a top case with polished stainless steel Apple logo, MacBook is available in a choice of three finishes — gold, silver and space gray — and is the first MacBook with an all-metal enclosure. The new MacBook is designed around a new full-size keyboard. To fit a full-size keyboard into the anorexically thin MacBook meant completely re-engineering how a notebook keyboard works. The new keyboard is 34 percent thinner and uses an Apple-designed butterfly mechanism that is an 40 percent thinner than a traditional keyboard scissor mechanism yet claimed to be four times more stable, providing greater precision no matter where your finger strikes the key.

The new MacBook features a new terraced battery design that is layered in individual sheets that are precisely contoured to fit the MacBook’s curved enclosure. As a result, the new MacBook has more battery capacity than would be possible with traditional battery cells and delivers a claimed all-day battery life with up to 10 hours of wireless web browsing.

The 12" MacBook also features a next-generation USB-C port that is compact, yet extremely versatile and even more user friendly. A new industry standard, USB-C supports higher wattage charging, USB 3.1 Gen 1 (5Gbps) data transfer and DisplayPort 1.2 all in a single connector one-third the size of a traditional USB port.

What Does The Refreshed 12-Inch MacBook Tell Us About Coming MacBook Pro Upgrades?
Will Zero-Travel Virtual Keys Be The Next Phase In Apple's Laptop Keyboard Evolution?
Should you Give Your Aging MacBook A New Lease On Life As A Chromebook?
Why Apple Still Sells An Eight-Year-Old Design Laptop
What Does Apple Have Cooking In Laptops For 2016?
New MacBook Air 13-Inch and 15-Inch Rumored For WWDC 2016
13-Inch Haswell MacBook Air At Two Years
The Future Of MacBooks: Thin, Light, (And Detachable?)
Original Aluminum MacBook - My Best Mac Ever?
Is The New 12-Inch MacBook The Do-All Device For Mobile Productivity?
Mac Notebook Evolution; A Desktop Replacement Memoir 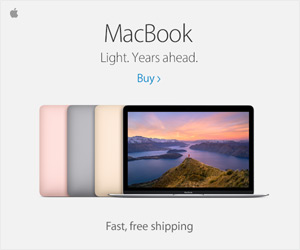